In the HK$23 million (US$3 million) Longines Hong Kong Mile (G1), the world's richest turf mile race, a field of 14 older horses went to post for the 1600 meter (about 1 mile) trip around one turn of the Sha Tin turf. Defending champion Able Friend was sent off as the 7-10 favorite, winner of the Queen's Silver Jubilee Cup (G1) and Champions Mile (G1), over 3-1 Maurice, winner of the Yasuda Kinen (G1) and Mile Championship (G1), and 7-1 Contentment, second in the Jockey Club Mile (G2) last out.

Jockey Damien Oliver sent 188-1 Secret Sham to the lead and he set fractions of 24.58, 47.80, and 1:11.24 while pressed by Contentment and stalked by 10-1 Beauty Flame. Into the stretch, Secret Sham tired badly, allowing Able Friend, 9th early, to gain the front at the 3/16 pole. Maurice who was 7th early and parked wide throughout, rallied on the outside to take over the lead for good at the 1/16 pole, and was all out to hold off hard charging 17-1 Giant Treasure by 3/4 length in 1:33.92. It was another 1/4 length back to favorite Able Friend third. 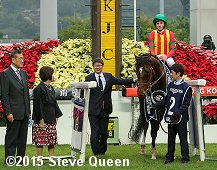 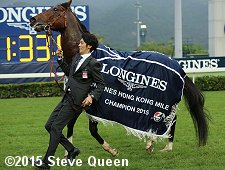 Left: Maurice in the winner's circle. Winning trainer Noriyuki Hori said, "This is my fifth visit to Hong Kong and I sent my horse here in great condition – everything went as planned. Now I will talk to the owner about Maurice's future."

Right: Maurice heads back to the barn in his winner's blanket. 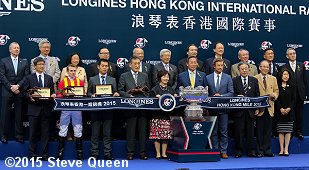 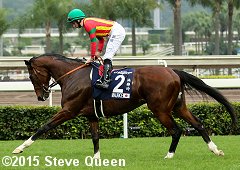 Left: The trophy presentation for the Hong Kong Mile. Winning jockey Ryan Moore said, "I was a little worried about him today, with him travelling and things. It took him a while to settle into the place but going to the start I was happy, he was moving well and relaxed well. He really dug in the last furlong and showed plenty of heart. A stronger pace would have been better for him. I think in (the Mile Championship) he was slightly more impressive on the day but he's had to travel in. That was his first run for a long time and he's backed up three weeks later. He's a very good horse and the race in Kyoto is always a very hard race and he's probably slightly underrated on what he's done. He's a top-class miler."

Right: Maurice warms up before the race. 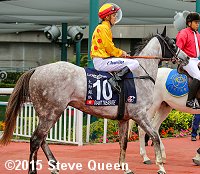 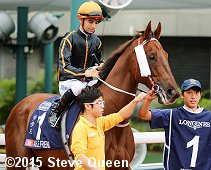 Left: Second place finisher Giant Treasure heads out for the post parade. Jockey Christophe Soumillon said, "He ran very well. Today we tried to get him to jump well from the gate. I thought Gerald (Mosse) would go in front. In the beginning I thought I would have a great run through but unfortunately I was one position too far back and when I came into the straight I was trying to come through horses because last time I rode him I was in the middle of the track and he was stopping a bit. Today, with the blinkers on, I wanted to make him follow horses for as long as possible. He got the gap and went through quite well, and today we were beaten by one of the best milers in the world. Able Friend ran a good race and we caught him on the line. It was a great run from my horse."

Right: Third place finisher and beaten favorite Able Friend heads out to the track before the race. Jockey Joao Moreira said, "He got to the front and just flattened out in the last 100 meters. I don't know why." Trainer John Moore added, "He hit the front and I was hoping he would sustain it. I don't know if his foot injury (mild lameness in his right foot) this morning had anything to do with it but it did take three checks from the vets before we could run him. It is the only excuse I can think of right now."