The Longines Hong Kong International Races are the richest horse races run in Hong Kong, and is the last major race day for Thoroughbred flat racing anywhere in the world. Billed as the "Turf World Championships", four Group 1 races were contested on Sunday afternoon over the right-handed 1 3/16 mile turf course at Sha Tin Racecourse. Conditions were typical for December in this subtropical city, with a good turf course, overcast skies, and temperatures in the low 70's, with a record crowd of 85,552 on hand. Hong Kong Jockey Club CEO Winfried Englebrecht-Bresges said, "Today we have seen the highest ever attendance at the Longines Hong Kong International Races. We have invested significantly in facilities to create this wonderful theatre for dream performances, and we are seeing that our racing fans are embracing this."

In the main event, a field of 13 older horses contested the HK$25 million (US$3.2 million) Longines Hong Kong Cup (G1) at 2000 meters (about 1 1/4 miles) on the turf. Defending champion Designs on Rome was sent off as the 5-2 favorite despite being winless since the Hong Kong Gold Cup (G1) in March, over 4-1 Free Eagle, winner of the Prince of Wales's (G1) but 6th in the Prix de l'Arc de Triomphe last out, and 5-1 Blazing Speed, winner of the Queen Elizabeth II Cup (G1) in April.

Jockey Yutaka Take sent 37-1 longshot A Shin Hikari to the lead first time past the winning post and he set easy fractions of 26.17, 49.64, and 1:13.39 while pressed by 124-1 longest shot Dan Excel and Free Eagle, about 2 lengths behind. Entering the stretch, A Shin Hikari continued to lead through a mile in 1:36.98. 8-1 Nuovo Record, 9th early, and Blazing Speed, 4th early, put in strong late rallies but A Shin Hikari, kept to task by Take, easily held off Nuovo Record to win by a length in 2:00.60. It was another 1 1/4 lengths back to Blazing Speed third, and 1 1/2 more to favorite Designs on Rome fourth. 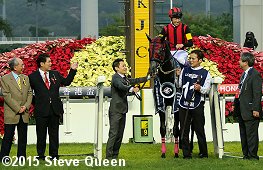 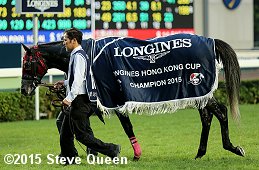 Left: A Shin Hikari in the winner's circle after the Hong Kong Cup. Winning jockey Yutaka Take said, "I thought the horse was in very good condition before the race and I had a lot of confidence in him. The horse can sometimes show a difficult temperament but he has been in good form here and travelling to Hong Kong has been very beneficial to him."

Right: A Shin Hikari heads back to the barn in his winner's blanket. 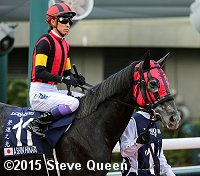 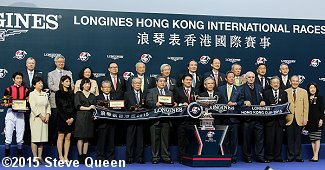 Left: A Shin Hikari heads out to the track before the race.

Right: The trophy presentation for the Hong Kong Cup. Winning trainer Masanori Sekiguchi said, "He usually has a difficult temperament but he was more relaxed than usual today so I felt good he would show his very good talent today. The horse will now get a vacation." 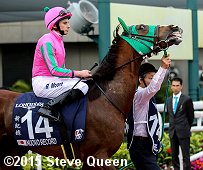 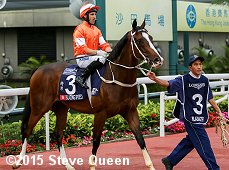 Left: Second place finisher Nuovo Record heads out for the post parade before the race. Jockey Ryan Moore said, "Very pleased with her, she ran a cracker. The other one was just too good on the day. She came here with a rating of 112 and that's just wrong. She was underrated."

Right: Third place finisher Criterion heads out for the post parade before the race. Jockey Neil Callan said, "He got a nice position and I was happy where I was because if I'd had to lay up any closer I'd have been pushing him. For Blazing Speed to have to be niggled along – the pace was pretty strong. He was well-balanced, he went into a nice rhythm and when I came off the corner I thought the race was mine for the taking. I was waiting for the one to stop in front but it actually went a length again, so fair dos to the winner. But my horse has run an incredible race."

All the jockeys and officials at the opening ceremony for the Longines Hong Kong International Races. HKJC Executive Director Bill Nader said, "I think when you look at the growth of this day, if you go back to 2005, the total attendance was only 44,000 and today we have 85,500. The mass appeal in Hong Kong and globally, and this occasion's rise up to become world racing's culminating event each year, is not only a spectacular success for the Hong Kong Jockey Club but also the sport at large."