Here are the top 10 money earning Thoroughbreds of all time as compiled by the North American official statistics collector Equibase. These are gross earnings and do not take inflation into account. Under Equibase's rules, only one start in North America makes a horse eligible for this list. 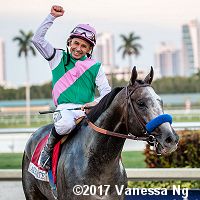 Arrogate tops the list, and he amassed his total earnings of $17,422,600 in only 11 lifetime starts, topping the list after only 8 starts! Until that point, he had only lost once in his career, finishing 3rd in his first race in April 2016. His first stakes race was his 5th lifetime start, winning the 2016 Travers at Saratoga. He won the 2016 Breeders' Cup Classic and was named Champion 3-year-old of 2016 despite not running in any of the Triple Crown races. In 2017 he debuted winning the inaugural Pegasus World Cup then shipped to Dubai to dominate the field in the Dubai World Cup. He stayed in training, but never won again afterwards, finishing 4th in the San Diego Handicap (G1), 2nd in the Pacific Classic (G1), and 5th in the Breeders' Cup Classic (G1) to close out his career. He will stand at stud at Juddmonte Farms starting in 2018 for a $75,000 stud fee. 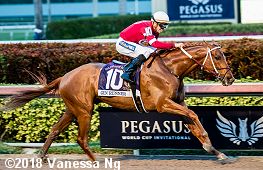 Gun Runner is the newest member of the top 10, moving into the 10th spot after his win in the 2017 Breeders' Cup Classic (G1) then vaulting to #2 after winning the Pegasus World Cup (G1) for his last career start before retiring. His final earnings total is $15,988,500 as of January 28, 2018. He won his first 2 starts at age 2 then finished 4th in his first stakes race. He followed the Louisiana path to the Triple Crown, winning the Risen Star (G2) and Louisiana Derby (G2) before running 3rd in the Kentucky Derby (G1). He skipped the rest of the Triple Crown but won the Matt Winn (G3) at Churchill Downs, was 5th in the Haskell (G1), 3rd in the Matt Winn (G1), 2nd in the Pennyslvania Derby (G2) and Breeders' Cup Dirt Mile (G1), finishing the year with a win in the Clark Handicap (G1) at Churchill. He started 2017 with a win in the Razorback Handicap (G3) at Oaklawn then shipped to Dubai to run 2nd to Arrogate in the Dubai World Cup (G1). Back to the US for a 4 race win streak in the Stephen Foster (G1), the Whitney (G1), and the Woodward (G1) leading up to the 2017 Breeders' Cup. 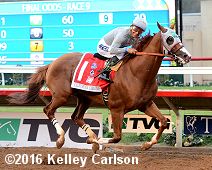 California Chrome moved to the top of the list with his win in the 2016 Dubai World Cup, but was knocked off by Arrogate in the next Dubai World Cup. He is a California-bred who started out in restricted state-bred company and improved to be competitive in open company. He won the 2014 Kentucky Derby and Preakness Stakes and seemed to be a lock to win the Belmont as well, but he didn't fire and Tonalist won the race. After a couple of lackluster races, he won again in November in the Hollywood Derby at Del Mar. As a 4-year-old, he shipped to Dubai to run second in the 2015 Dubai World Cup at Meydan and didn't race again until January of his 5-year-old season. During his time away, original co-owner Steve Coburn sold his 30% share to Taylor Made Farm, with the new partnership of Perry Martin and Taylor Made named "California Chrome LLC". He won the San Pasqual at Santa Anita, then shipped to Meydan in Dubai where he won a prep race and then the 2016 Dubai World Cup, where the winner's share of the $10 million purse put him at the top of the all time earnings list. Since then, he has won the San Diego Handicap, Pacific Classic, Awesome Again Stakes, Los Alamitos Winter Challenge, and finished second in the Breeders' Cup Classic taking him to total earnings of $14,752,650 in 27 lifetime starts. He iretired after finishing second to Arrogate in his final start in January 2017 in the inaugural Pegasus World Cup. 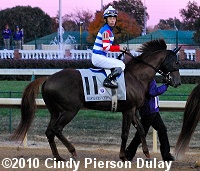 Espoir City had 40 starts with 17 wins, 10 seconds, and 3 thirds, with total earnings of $11,443,812. He only started once outside of Japan where he finished 10th in the 2010 Breeders' Cup Classic. Many would say he doesn't belong on this list since all his starts but the one were in Japan where the purses are inflated and most of the races restricted to Japanese-bred horses, however his one U.S. start put him on Equibase's official records. 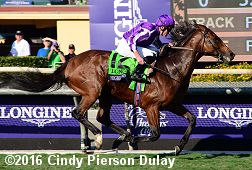 Highland Reel raced successfully for 4 years while racking up lots of frequent flier miles, finally breaking the top ten as a 5-year-old in 2017. He closed out his career on December 10, 2017, with a win in the Hong Kong Cup that moved him from 9th to 4th place with total earnings of $10,530,964. He started his career in the UK where he won his first stakes in his 3rd start as a 2-year-old. He started slow as a 3-year-old, winning the Gordon Stakes (G3) at Goodwood in his 4th start then shipping to Arlington Park in the US to win the Secretariat Stakes (G1). Back to Ireland to finish 5th in the Irish Champion Stakes (G1) then over to Australia to finish 3rd in the Cox Plate (G1) at Moonee Valley and on to Hong Kong to win the Hong Kong Vase (G1). He started 2016 slow again losing in Dubai and Hong Kong and finally back to England to win the Queen Elizabeth Stakes (G1) at Royal Ascot. He had 2 more seconds in 3 starts in England, Ireland, and France before shipping to the US to win the Breeders' Cup Turf (G1). He closed out the year with a 2nd in the Hong Kong Vase (G1). He started 2017 again in Dubai with no success, then back to England to win the Coronation Cup (G1) at Epson and the Prince of Wales' Stakes (G1) at Ascot. He closed out the season with a 3rd and 4th at Ascot before shipping to the US try try to win the Breeders' Cup Turf where he was 3rd. He won his final career start in the Hong Kong Vase (G1) and will start his stud career next year. 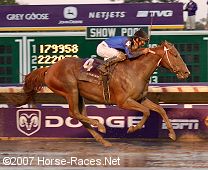 Curlin is a horse who many would pick as the best horse of his decade. He was named Horse of the Year in 2007 and 2008, and was also Champion 3-year-old in 2007 and Champion Older Male in 2008. Some of his major wins include the 2007 Breeders' Cup Classic, Jockey Club Gold Cup (twice), Dubai World Cup, Preakness Stakes, Stephen Foster Handicap, and Woodward Stakes. Curlin retired with 11 wins in 16 starts and earnings of $10,501,800, the most ever by a thoroughbred race horse at the time and American racing's first $10 million winner. 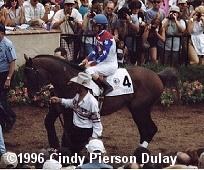 Cigar retired in 1996 after racing 33 times with 19 seconds and 4 thirds, with total earnings of $9,999,815. He started as a turf horse but met with little success until he moved to the dirt in 1994 where he became a superstar, reeling off 16 straight wins to break Citation's record for consecutive wins. He won the 1995 Breeders' Cup Classic to cap off an undefeated 10-for-10 that year, and closed out his career finishing third in the 1996 Breeders' Cup Classic after winning the inaugural Dubai World Cup. He was retired to stud where he turned out to be sterile, leading to a huge insurance pay-off. He was then sent to live at the Kentucky Horse Park where he was the main attraction in the Hall of Champions until his death in 2014 from complications of osteoarthritis in his back. 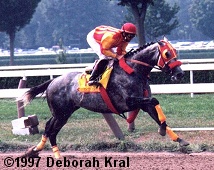 Skip Away retired in 1998 after racing 38 times with 18 wins, 10 seconds, 6 thirds, and total earnings of $9,616,360. He was competitive in the 1996 Triple Crown, but really came into his own late in the season, winning the Woodbine Million and Jockey Club Gold Cup (defeating Cigar). As a 4-year-old he raced in top company, closing out the year with wins in the 1997 Jockey Club Gold Cup and Breeders' Cup Classic which started a 9 race win streak that lasted through the 1998 Woodward Stakes. His last two starts were lackluster, leading to his retirement. 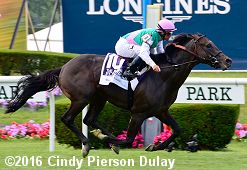 Flintshire raced in Europe until age 4 when he shipped to the US to finish second in the 2014 Breeders' Cup Turf. After that he became a globe trotter, winning the 2014 Hong Kong Vase at Sha Tin, finishing second in the 2015 Dubai Sheema Classic, finishing second in the 2015 Grand Prix de Saint-Cloud in France, back to the US to win the 2015 Sword Dancer at Saratoga, back to France to finish second in the Prix de l'Arc de Triomphe, and back to Hong Kong to finish second in the Hong Kong Vase again. In 2016, he stayed in the US and won the Manhattan at Belmont Park, the Sword Dancer at Saratoga, and closed out the year with second place finishes in the Joe Hirsch Turf Classic at Belmont and the Breeders' Cup Turf at Santa Anita. He has 8 wins, 12 seconds, and a third place finish in 24 career starts with total earnings of $9,589,910. Flintshire was retired to stud at Hill 'n' Dale Farms near Lexington, Kentucky, and will stand his first season as a sire in 2017. 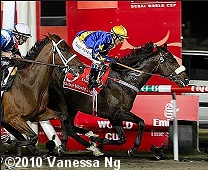 Gloria de Campeao retired in 2010 after 25 starts with 9 wins, 6 seconds, and 3 thirds and total career earnings of $9,258,355. He was bred in Brazil and raced there until late in 2007 when he shipped over to France to race at Longchamp once then on to Dubai. Most of his career and the majority of his earnings were in Dubai including a second in the 2009 Dubai World Cup and winning the 2010 Dubai World Cup. His only start in the US was the 2009 Arlington Million where he finished 9th, so he is also one who many think should be left off the list, however, like Espoir City, he is included because of Equibase's qualification rules. 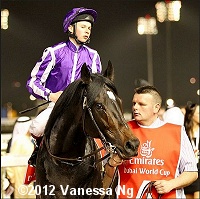 So You Think (#11) was knocked out of the top 10 by Gun Runner. He was born in 2006 and retired in 2012 after a career that spanned 23 races with 14 with, 4 seconds and 1 third and career earnings of $8,696,325. He was bred in New Zealand and mostly raced in Australia until shipping to Europe in 2011 with some success. His only US start was the 2011 Breeders' Cup Classic where he finished 6th after his owner paid a huge supplement just to get him in the race. He didn't race again until the 2012 Dubai World Cup where he finished 4th. He only raced two more times, winning the Tattersalls Gold Cup at the Curragh and the Prince of Wales's Stakes at Royal Ascot. 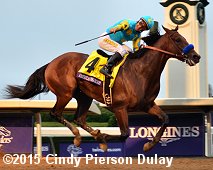 American Pharoah (#12) was knocked out of the top 10 by Highland Reel. He rose to fame in 2015 when he became the first horse since Affirmed in 1978 to win the Triple Crown. After winning the Kentucky Derby, Preakness Stakes, and Belmont Stakes, he only raced three more times, winning the Haskell Invitational, finishing second in the Travers, and winning the Breeders' Cup Classic, the latter completing the so-called "Grand Slam" of a Triple Crown sweep plus the Classic. He retired after that with 9 wins and 1 second in 11 starts and career earnings of $8,650,300. He is standing as a stallion at Coolmore America (Ashford Stud) in Kentucky. 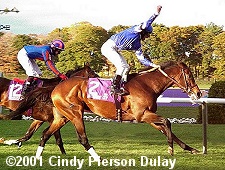