The $1.5 million Preakness Stakes (G1) is the second jewel in the Triple Crown. A field of 10 three-year-olds contested this 1 3/16 mile trip around two turns at historic Pimlico Race Course in Baltimore, on a picture perfect Saturday afternoon with clear skies and temperatures in the low 70's, with a record 123,469 fans packed into the grandstand, clubhouse, and infield.

As expected, Kentucky Derby and Santa Anita Derby (G1) winner California Chrome was sent off as the 1-2 favorite, on a 5 race winning streak and undefeated so far in 2014. In to challenge him included 5-1 second choice Social Inclusion, third in the Wood Memorial (G1) after winning his first two career starts, and 10-1 third choice Ride On Curlin, seventh in the Kentucky Derby after finishing second in the Arkansas Derby.

Jockey Jeffrey Sanchez sent 34-1 longest shot Pablo Del Monte to the lead first time by and he set fractions of 23.56, 46.85, and 1:11.06 over the fast main track while pressed by 19-1 Ria Antonia, with California Chrome sitting behind the leaders 3 wide in third. Entering the stretch, the pace duel tired out both Pablo Del Monte and Ria Antonia, as California Chrome easily inherited the lead and opened a 3 length advantage through 1 mile in 1:35.65. Ride On Curlin, 9th early, tried to close but California Chrome cruised past the post 1 1/2 lengths in front in a time of 1:54.84. It was a long 6 1/2 lengths back to Social Inclusion third. 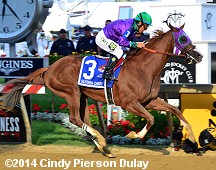 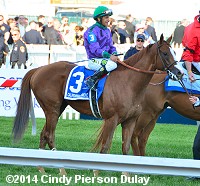 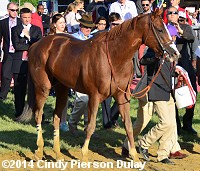 Right: California Chrome heads back to the barn after the race. Trainer Art Sherman said, "He broke great and had a perfect trip. I was so happy when I saw where he was able to set him. Right now he's really on his toes and doing good. He's a remarkable horse to come back in 2 weeks and win. I know he's not the only horse that ever did that, but it's tough on a horse to come back in 2 weeks. I appreciate everyone involved in my team. They did a hell of a job. Both my sons are here. It's very emotional. To me, this race was even a little tougher for me knowing that I'm coming back in a little shorter distance than I normally ever run them and the time I give them to rest between races. I was a little concerned about that, but he's got a big heart this horse – big." 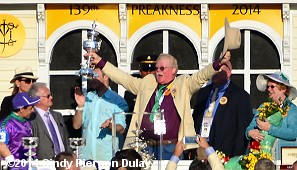 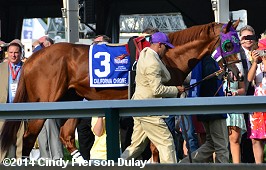 Right: California Chrome after being saddled on the turf course. Trainer Art Sherman added, "Wow. I'll tell you it's quite a thrill. I know we had to run harder in this race. For me, just watching him perform, coming back in two weeks, I was a little concerned. But I'll tell you one thing: he's a real race horse. I'm hoping that the 1 1/2 miles is up his alley, too, because he's a very good horse. Oh, you've got to have a tear. I've got my whole family here. We worked hard all year and Victor rode him perfect. It's a dream for any trainer to do this. I couldn't tell how much horse he really had. It was hard for me to get a good view because people were jumping up and down in front of me. But when I looked up at the board, I could see him starting to move away and I felt really good then." 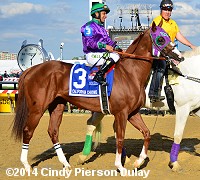 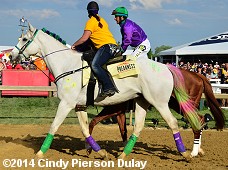 California Chrome in the post parade. His pony horse was decorated to match his silks, even his tail! Jockey Victor Espinoza said, "It was not easy, but we got it done. I'm excited and looking forward. I had to start early because the outside horse was pushing me. I thought I had the perfect position, but when the outside horse attacked me, I had to open it up at that point. It was tough today. This race was a little complicated. I saw another horse take the lead, I'm second, then (Ria Antonia) wants to go. I have to steady, steady and I have to hope and make the right decision and hope for the best. Then, I'm sitting third and I think it's perfect." 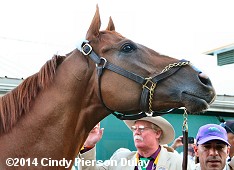 Left: California Chrome back at the barn after the Preakness with co-owner Steve Coburn in the background. Coburn said, "I don't know how to explain how I feel within my heart and soul. It's hard for me because I get very emotional about it. I honestly believe this horse is America's horse. He's giving everybody that little light bulb, and when it clicks on, you know what? We can do this. I don't know what it is, but we're going to stay in the game to make sure this colt gets to be the best he can be. I've been a firm believer in that ever since (he was born), and he hasn't proven me wrong. This is a nice horse."

Right: Shortly after the start of the Preakness with California Chrome in the center. 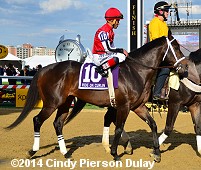 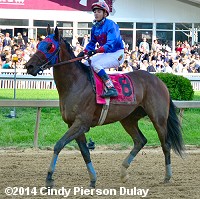 Left: Second place finisher Ride On Curlin in the post parade. Trainer Billy Gowan said, "I thought it was awesome. California Chrome ran a great race and he's a great horse. My horse ran a great race. He was in a good spot down the back. Joel (Rosario) said he got shut off for a second, but he came running in the stretch and gave me a heckuva thrill. I'm really proud. I like the horse; I like everything; I like the Preakness. I think we have to go to the Belmont if he comes out of the race good."

Right: Third place finisher Social Inclusion returns after the race. Jockey Luis Contreras said, "He acted up a little bit in the gate, but it was no big deal at all. The horse ran a really big race today. I can't tell you how happy I am with this horse. We will get them the next time." Owner Ron Sanchez added, "My horse, I would have liked to have seen him on the lead, but that didn't happen today. I'm proud of my horse. He ran well. Right now, we're going to the Belmont."