The record 123,469 in attendance at Pimlico for the Preakness Stakes (G1) were treated to a marathon 14-race card with the first race off at 10:45am. It was a picture perfect day weather-wise, with sunny skies and temperatures in the low 70's. The main track was fast but the turf course was still rated good due to rain on Friday. 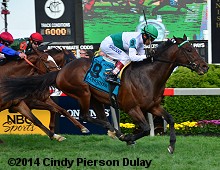 A field of 10 older horses went 1 1/8 miles on the turf in the $400,000 Dixie Stakes (G2). Canadian Horse of the Year Up With The Birds was sent off as the 5-2 favorite, 6th in a Keeneland allowance after winning the Jamaica (G1) at Belmont. In to challenge him included 3-1 second choice Hey Leroy, an allowance winner at Gulfstream last out, and 4-1 third choice Charming Kitten, an allowance winner at Keeneland. 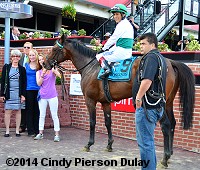 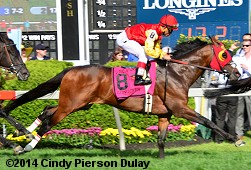 Left: Utley in the winner's circle. Jockey Edgar Prado said, "Jonathan was very confident to bring this horse to this race. The horse has been training well and he thought he would have a good chance and he proved that he was right. I got a beautiful trip and I was able to go inside and save ground in both turns, angle out in the stretch and he finished real well. Jonathan did a super job to get this horse ready." Keri Brion, assistant to trainer Jonathan Sheppard said, "I was on the phone with Jonathan and I said, 'Can you believe that?' He was watching the race on tape delay and he said, 'What happened?' I said, 'We won it, we won it.' He's just been kind of a bad luck kind of horse. He's hard-trying and this race was kind of a step up. He ran a very nice race two weeks ago at Churchill Downs, and Jonathan thought, 'Why not take a shot?' He really took to the soft turf."

Right: Sixth place finisher and beaten favorite Up With The Birds first time by. The 5-2 choice rated in 8th 7 1/2 lengths off the pace under jockey Joel Rosario, but failed to rally. The Malcolm Pierce trainee has a record of 6 wins, 2 seconds, and 1 third in 11 starts, earning $1,152,259 for owner-breeder Sam-Son Farm. 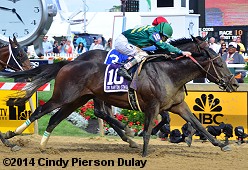 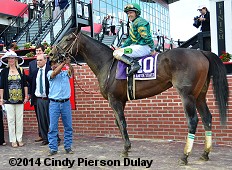 Class Leader in the winner's circle. Trainer Neil Howard said, "He's kind of a big colt, still growing up, but a very nice colt. I think he has a future. We couldn't be happier. He had to work but that's the kind of horse he is. It just takes a while for him to get his feet under him. We all agreed he was a little close in the Illinois Derby, but the horse that won (Dramatic Impact) is a very nice horse running in the Preakness today. We weren't quite ready for that." Jockey James Graham added, " I didn't take him, he took me. I didn't ask him, he went. I was a good passenger. The only trouble we had was in the first turn. We got a little squeezed and he dropped the bit, but he came back running." 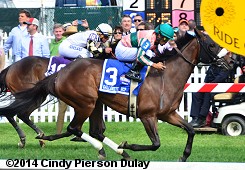 A field of 7 older fillies and mares contested the $150,000 Gallorette Handicap (G3) over 1 1/16 miles on the turf. 7-5 favorite Somali Lemonade battled for the early lead with 19-1 Daydreamin Gracie through a quarter in 23.46 and a half in 47.60, with the pair 8 lengths clear of the rest of the field. On the far turn Somali Lemonade accelerated away from the tiring Daydreamin Gracie, getting the aile in 1:37.78. 2-1 Whatsdachances, last through the first 5/8, put in a very strong inside rally but Somali Lemonade dug in and held her off by 1/2 a length in 1:44.16. It was a long 7 1/4 lengths back to 14-1 Triple Arch third.
Full results chart from DRF 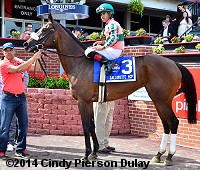 Somali Lemonade in the winner's circle. Jockey Luis Saez said, "She started to get out a little bit, but I didn't want to fight her. She did the same thing last time, and when you try to fight her, she tries to stop. The trip was good. I put her in the lead like last time, but I had a little pressure all the way around today. She just kept running. She gave me everything." Trainer Michael Matz added, "She never started going to the lead until she turned 5 and I don't know what's gotten into her in her old age. The trip today was fine. She likes the footing a little soft and she only had a little early pressure. We were going to retire her this year but after she ran that good race at Gulfstream (Marshua's River) the owner, who is my sister-in-law (Caroline Forgason) said, 'Do we really have to retired her?' This is her only horse. The Just a Game is a possibility." 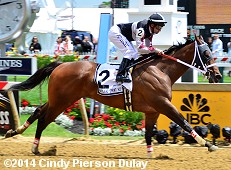 Kicking off the stakes action on Preakness day, the $150,000 Maryland Sprint Handicap (G3) featured a field of 5 older horses sprinting 6 furlongs on the main track. Jockey Joe Bravo sent 3-5 favorite Happy My Way to the lead immediately and he set fractions of 22.85 and 45.22 while stalked by 9-1 Action Andy. Entering the stretch Happy My Way opened up on the field through 5/8 in 56.88, and finished 5 3/4 lengths in front of late-running 2-1 Lemon Drop Dream in 1:09.21, just 21/100 off the track record. It was another length back to 6-1 Service for Ten third.
Full results chart from DRF 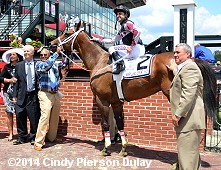 Happy My Way in the winner's circle. Trainer Joe Orseno said, " "This horse really excelled over the Gulfstream track. There was a little threat and fear that it was Gulfstream that got him that good. But this was good. I told Joe (Bravo), 'Be careful of the 1,' because I heard when he gets in front of horses he gets real brave. Joe said he wouldn't get in front of us. He knows the horse and he wanted the lead and he got it. Terrific ride. For sprinters, the horse is just push-button." Jockey Joe Bravo added, "It was a pretty easy race for me today. He did all the work. There wasn't much for me to do or think about. I think we outran everybody, and that's why we got to the winner's circle." 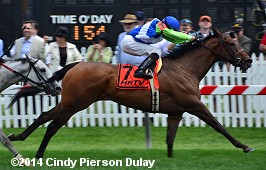 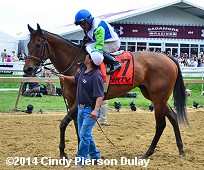 Ageless heads to the winner's circle. Trainer Arnaud Delacour said, "It just worked out with a great trip. I was not quite sure how she'd handle the ground. We had a lot of rain yesterday. Obviously, she didn't mind. She saved ground and came with a big kick at the end. She likes this distance, but I think she's good anywhere from 5 to 6 1/2 (furlongs)." Jockey Luis Garcia added, "It was good to save ground, but it wasn't my idea to sit on the rail. It's just how the race developed. I wasn't sure the rail would open. I was behind (Quality Lass). Finally she left the rail a little bit and my filly slipped through. I loved it. We went for it the last 1/8 mile." 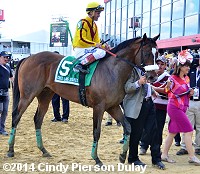 Meadowood heads to the winner's circle. Jockey Javier Castellano said, "I had beautiful trip. I really liked the way he did it today. It was really professional how he did it. He got in behind and at the top of the stretch he took off. He's going to be a good horse in the future. The only speed horse was (Brewing). I didn't want to hook him and that was the horse to beat. I just wanted to track him and get him at the right time and the right place." Trainer Derek Ryan added, "It worked out perfect with him sitting second just off the lead. This is a classy horse and he's the kind that doesn't need to have the lead. I got him in the middle of January. We had entered in a stake in New York and scratched out of that and this race came up and looked like a good spot." 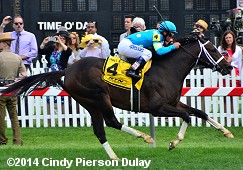 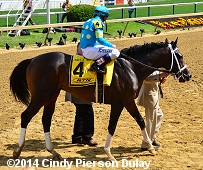 Wallyanna heads to the winner's circle. Trainer Michael Pino said, "He didn't break great but it was probably perfect for him. He was super sharp and the break kept him off the lead. I claimed him and when we first got him he had a presence and acted like a good horse. I couldn't have asked for this race to go better. He's a young horse and is still learning." Jockey Javier Castellano added, "Our goal today was to take him back a little bit, then kick it to the finish. I was able to take him back and rate behind the leaders. He sat beautiful on the backside. Turning for home, the frontrunner drifted a little bit and I had to check. We steadied and then he showed good acceleration when I asked him for run."