The filly counterpart to the Preakness is the $500,000 Black-Eyed Susan Stakes (G2) held on the Friday before Preakness day. The 38,957 in attendance enjoyed a sunny day with temperatures in the low 80's. After 2 scratches, a field of 7 three-year-old fillies went to post in this 1 1/8 mile trip over the main track at Pimlico Race Course in Baltimore, with Ashland (G1) winner Emollient sent off as the 4-5 favorite over 2-1 second choice Fiftyshadesofhay, third in the Santa Anita Oaks (G1), and 7-2 third choice Maracuya, unbeaten in 2 lifetime starts and making her stakes debut here.

John Velazquez sent Maracuya to the front first time by and she set fractions of 23.91, 48.71, and 1:13.26 while stalked by 19-1 Toasting and 12-1 Marathon Lady. On the far turn, Marathon Lady moved up to take over, getting the mile in 1:38.88, but Fiftyshadesofhay, 6th early, closed with a rush to win by a neck in 1:52.73 over the fast track. It was a long 4 1/2 lengths from Marathon Lady to Toasting third, while favorite Emollient checked in sixth. 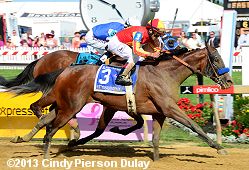 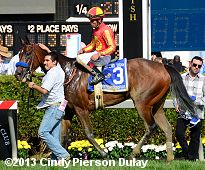 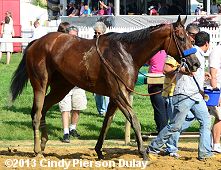 Left: Fiftyshadesofhay circles after winning the Black-Eyed Susan. Winning jockey Joel Rosario said, "It was kind of a perfect trip, but she was kind of slowing a little bit from the dirt in her face. I got her on the outside and she looked like she was really comfortable. Right when I went past the 3/8 pole before turning for home, she kind of got away from me a little bit. I was kind of worried about it, but she was able to get it back together and she kept going. Bob told me, ‘She's just one-paced, so keep her going.' So I think it was a little bit better to keep her on the outside. When I passed the 1/16 pole I could see that the horse in front of me was backing up a little. That's when I felt better.

Right: Fiftyshadesofhay heads back to the barn after the race. 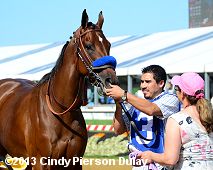 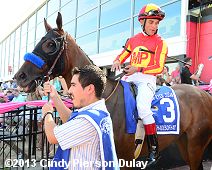 Left: Fiftyshadesofhay gets identified before going in the paddock. Winning trainer Bob Baffert said, "I wasn't sure turning for home because I told Rosario that she usually runs 1-2-3, but ride her the way you feel you should ride her. Rosario sort of did his own thing today, but it was the right thing." 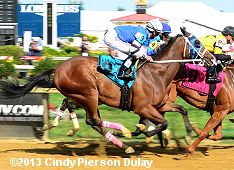 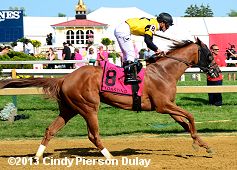 Left: Second place finisher Marathon Lady as they pass by the first time. Jockey Robby Albarado said, "I had a lot of horse under me the entire race. Something must have happened to Mike's (Smith) filly (Emollient) in the gate, because I thought she'd be up front. I found myself lying third and very comfortable at every point. I thought I had it won until right before the wire."

Right: Third place finisher Toasting crosses the finish line. Jockey Javier Castellano said, "She was great today. They put the blinkers on her and she pulled me all the way. I'm happy with what she did against the best 3-year-olds in the country. She stepped up and showed us her class today." 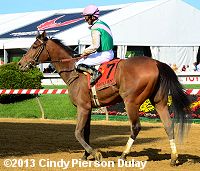 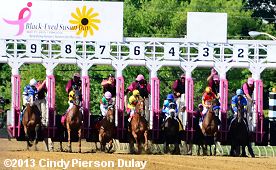 Left: Sixth place finisher and beaten favorite Emollient returns after the race. Trainer Bill Mott said, "She had a pretty good stumble leaving the gate, which didn't help. Obviously, she got back a little further and had to overcome that. It looked like to me she might have been fighting that racetrack. The main track may not be her best surface, so you might see her try the turf course next time."

Right: The fillies break from the pink starting gate for the Black-Eyed Susan. 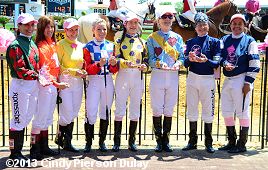 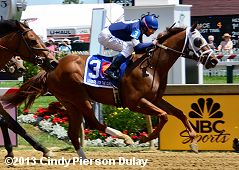 The 4th running of the Legends for the Cure race, a typical $52,000 allowance for older horses going 6 furlongs on the main track, featured 8 retired female jockeys coming back to raise money for Susan G. Komen for the Cure. Mary Russ-Tortora took 2-1 favorite Haywired to the lead immediately, set the pace while 2 lengths ahead of Zoe Cadman's mount Show Ya Luv, and then held off late-running Grain with Canadian jockey Stacie Clark-Rogers for the 1/2 length win. It was another 3/4 length back to P.J. Cooksey aboard Outbacker third. Left: All the jockeys for the Lady Legends. From left to right: Stacie Clark-Rogers, Abigail Fuller, Patty Cooksey, Zoe Cadman, Barbara Jo Rubin, Jennifer Rowland-Small, Mary Russ-Tortora, Cheryl White

Russ-Tortora said, "I still ride horses regularly, but that's not the same as breezing and galloping," she said. "He stumbled leaving there, but he seemed to catch on to the lead pretty easy. I just nursed it along and tried to keep the creepy feeling of everybody looking over my shoulder away. It means a lot to me. I have good friends that have battled cancer and survived it. My own sister died of breast cancer. To have the technology that God has given them now is just wonderful. I'm so thankful for it." This is her first Lady Legends win, after finishing third in the inaugural running. 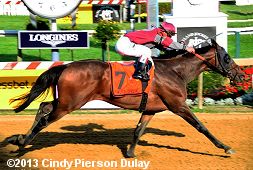 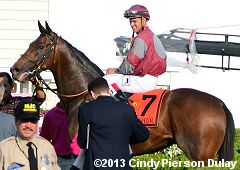 The co-feature on Friday is the $300,000 Pimlico Special (G3). A field of 6 older horses contested this historic 1 3/16 mile trip, with Last Gunfighter sent off as the 3-5 favorite off a 5 race win streak including the Excelsior (G3) at Aqueduct. In to challenge him included 5-2 second choice Eighttofasttocatch, winner of the Henry Clark last out, and 4-1 third choice Richard's Kid, 8th in the Alysheba (G2) last out and winless since the Cougar II Handicap (G3) last July. Jockey Forest Boyce sent Eighttofasttocatch to a clear lead first time by and he set fractions of 24.56, 49.91, and 1:14.18 while as many as 3 lengths in front of Last Gunfighter second. Eighttofasttocatch continued to lead to midstretch through 1 mile in 1:39.24 but was tiring. Last Gunfighter easily passed him at the 1/16 pole and drew off to win by 4 1/4 lengths in 1:58.50. It was a long 9 1/4 lengths back to Richard's Kid third.

Winning trainer Chad Brown said, "(Eighttofasttocatch) is a good horse. With the softer fractions at the 1/4 pole, it looked like he was getting away from us a little bit. But I had a lot of confidence that Javier had the pace judged right. This horse, he's done that before in his races. He's a bit of a grinder, where it kind of looks like he loses his placing and then here he comes again. It was kind of typical of the way this horse runs. Once he had him collared; any horse that puts up that many Ws in a row, you know they want to get their nose on the line."

Jockey Javier Castellano added, "I had a beautiful trip. That's where I wanted to be, and it worked out great. It was a small field, and I didn't see much speed. The only horse that had the speed was the frontrunner, and he was my target all the way. It worked out perfect. At the 3/8 pole I had to use him a little bit to get him into the race, and he got into it really quick. I really liked the way he did it. Turning for home, he's a game horse and he passed the other horse and he took off. It was a great performance today."
Full results chart from DRF 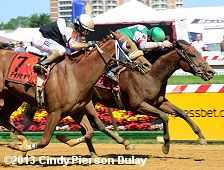 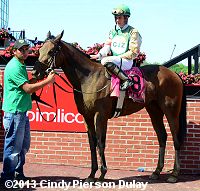 Winning trainer Tony Dutrow said, "When I watched the race, it was uncharacteristic of how she had run before. She got herself out of the race and she finished up well. After listening to Sheldon, he chose to ride her that way. He felt that she was very good the whole way around there. Having run her four or five times you have an expectation when the gates open. Sheldon was very confident and comfortable with it, but she had never run that way before so I wasn't."
Full results chart from DRF 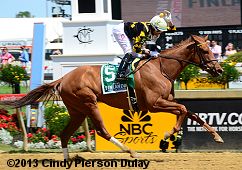 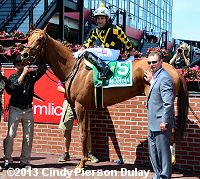 Winning jockey Xavier Perez said, "We were sitting where we wanted. The 1 and the 2 horses were fighting it out. I just wanted her to stay on and relax. At the 3/8 pole, the ‘2' then took back on the rail and I put pressure on my horse and she took off running. She gave me more when I tapped her left-handed down the stretch. The rail is a little deep so I wanted her on the outside. The last sixteenth, I looked back and started celebrating." Perez was the jockey aboard Spicer Cub in the famous wild ride at Pimlico back on April 13.
Full results chart from DRF 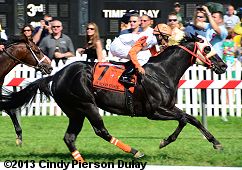 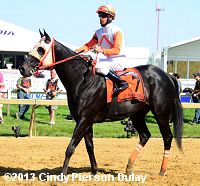 The $100,000 Jim McKay Turf Sprint featured a field of 6 older horses going 5 furlongs on the turf. 7-1 second choice Spring to the Sky dueled with even-money favorite Bridgetown through fractions of 22.27 and 44.51. In deep stretch 11-10 second choice Ben's Cat, fifth early, rallied to win by a length over Spring to the Sky in 56.18 over the firm course. It was another 1/2 length back to Bridgetown third.

Winning trainer King Leatherbury said, "It looks like he's as good as ever as a 7-year-old. He's not that well bred, I just hit a home run when everything fell into place with this horse. He's super and has stayed totally healthy. He's probably one of the best dirt-grass horses in the country. He'll run in the Governor's Cup at Penn National on June 1."
Full results chart from DRF 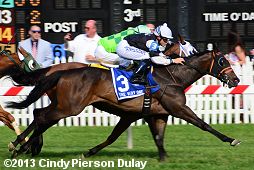 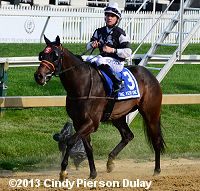 A full field of 14 older fillies and mares sprinted 5 furlongs on the turf in the $100,000 The Very One Stakes. 8-1 Nechez Dawn took over down the backstretch through fractions of 22.12 and 44.75, but 7-2 second choice Sensible Lady, 13th early, came through between horses in the lane to win by a neck in 56.57. It was a length back to 68-1 Donna Getyourgun third, while 2-1 favorite Sweet Cassiopeia checked in 6th.

Winning jockey Angel Serpa said, "We had a hard trip because she broke a little bit slow. I just wanted to save ground. Turning for home, we had a lot of horse and I had no choice but to go. I just asked her to run at the eighth-pole and she responded so well. She gave me everything. She's nice filly and she showed she has a big heart."
Full results chart from DRF 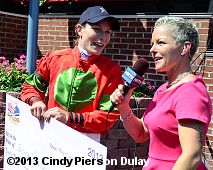 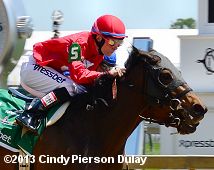 Another feature of the Friday before the Preakness is the $34,000 Xpressbet "Battle of the Sexes" Jockey Challenge, with a team of 4 female jockeys taking on 4 male counterparts in 4 designated races. Canadian jockey Emma-Jayne Wilson won the last 3 of the 4 races to take the contest outright with a 13 point edge on runner-up Edgar Prado, winner of the first leg. The women defeated the men in total points in a final score of 61-39. A $2 bet on Wilson to win the contest paid $25.00 while the Wilson-Prado exacta paid $72.80. Completing the order, Forest Boyce was third, followed by a 4th place tie betweenn Javier Castellano and Kristina McManigell, then defending champ Rosie Napravnik, Gary Stevens, and John Velazquez.

Wilson, who took home $12,000 for the win, said, "It feels good. What it all boils down to is having fun and showcasing the game, but I'm a jock and I'm a competitor, so you always like to win. You look at the form every time in these challenges, and it's all luck of the draw. You take a look and think you have some decent shots with some decent horses; for it to come to fruition is just good fun. I just come to do these things to showcase the game and have fun. The win here today is just a bonus. Every year I walk into the jock's room here and at Woodbine, and it's full of girls. It's getting to be more and more every year, and that's what I like to see. There's a larger number of girls getting the opportunity to ride and showcase their abilities, and within that percentage you get those upper-echelon jocks that get a chance to showcase themselves in the big races."