The $1 million Preakness Stakes (G1) is the second jewel in the Triple Crown. A field of 11 three-year-olds contested this 1 3/16 mile trip around two turns at historic Pimlico Race Course in Baltimore, on a sunny Saturday afternoon with temperatures in the low 80's before a record on-track crowd of 121,309.

Jockey Mike Smith sent Bodemeister to the lead first time past the stands and he set fractions of 23.79, 47.68, and 1:11.72 over the fast track, while stalked by 34-1 Pretension and 6-1 Creative Cause. Mario Gutierrez kept I'll Have Another out of trouble in fourth early. Entering the stretch, Bodemeister opened up a 3 length lead, getting the mile in 1:36.69, but like in the Derby, I'll Have Another closed on the outside. The pair hooked up inside the 1/16 pole and I'll Have Another pushed ahead by a neck in the final strides to get the win in 1:55.94. It was a long 8 3/4 lengths back to Creative Cause third. 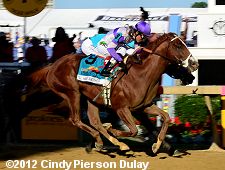 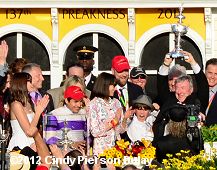 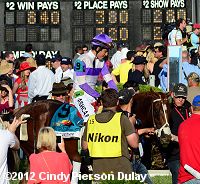 Left: The happy connections celebrate with the trophy.

Right: I'll Have Another is mobbed on his way to the winner's circle. His trainer Doug O'Neill said, "I'm just numb. I could see him and I felt like he was coming, but you never want to expect that he's going to be in front. I saw him coming.It seemed like the stretch never ends. Thank God. Usually you want it to end. Incredible. The great part of I'll Have Another is that any of us could have a horse like this. He didn't cost a million bucks. But he's got the heart of a champion, the stride of a champion, and the mind of a champion." 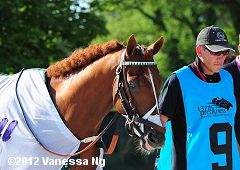 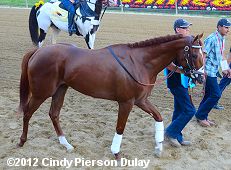 Left: I'll Have Another in the walk over from the barn before the race.

Right: I'll Have Another heads into the indoor paddock for saddling. Owner J. Paul Reddam said, "It wasn't really until about 20 yards from the wire that I thought we were going to win. So it was pretty exciting. There are a lot of horses that have been in this position (Triple Crown) the last 15 years, and it didn't happen for them. So we're only two-thirds there, right? So we've got to be cool, including the chalk, and try to block everything out. When we get to the Belmont, just ride the race, and if it happens, it happens." 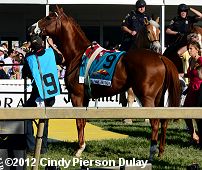 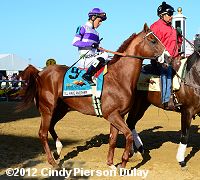 Left: I'll Have Another heads on to the turf course to parade before the race. His jockey Mario Gutierrez said, "This is not about me. We talked about it with Mr. Reddam and Mr. O'Neill. We wanted to be a little bit closer to Bodemeister this time because normally that horse runs a huge race. My horse has a tremendous kick in the end. He has been proving that in the last three races. He didn't disappoint again today. I want to put the pressure a little bit on the side because the credit he earned all this. He has proven a lot of people wrong. I just have to prepare because I want to be at the same level as him. He's an amazing horse. 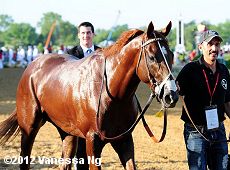 Left: I'll Have Another heads to the test barn after the race. His owner Paul Reddam added, "The horse has done everything that we've asked of him this year, and he hasn't had the most respect. He's never been favored, and I think for those who follow the horse and bet on them, that will be pretty rewarding. I don't know if that will be the case next time after today's race."

Right: I'll Have Another returns to the barn. 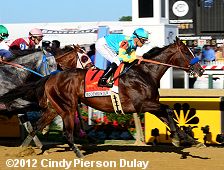 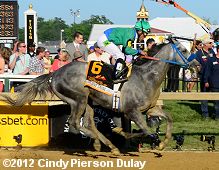 Left: Second place finisher and beaten favorite Bodemeister leads first time by. His trainer Bob Baffert said, "I felt really good about where he was. He looked like he was traveling nicely down the backside and coming to the 3/8 pole, he just sat on him. The fractions were more reasonable today, so turning for home I really thought he was going to do it. He just got a little late there at the end. The winner's a good horse. It was a good horse race. I really can't complain. We didn't win it, but my horse ran his race. The winner's a good horse. He'll get the respect now that he deserves. The California horses are really tough. They ran 1-2-3. I'm proud that as a trainer my horse showed up and he ran his race." Jockey Mike Smith added, "I thought I put him away but he (I'll Have Another) reached up and got us with three strides. Two great horses and I give them all the credit for what they did."

Right: Third place finisher Creative Cause runs out after the finish. His trainer Mike Harrington said, "He just got outrun. He always brings his best race. He just couldn't outrun those horses today. What can you do? You've got to try to win the race. Joel Rosario tried to win the race. I have no regrets. He probably won it for I'll Have Another." Jockey Joel Rosario dedicated the ride to his brother who was killed earlier in the day in a traffic accident in the Dominican Republic.