The $1.5 million Belmont Stakes (G1) is the final leg of American racing's Triple Crown for three-year-olds and the highlight of the New York racing season, contested at the marathon distance of 1 1/2 miles, one complete trip around the main track at Belmont Park. Conditions were excellent, under a mostly sunny sky and temperatures in the mid 80's. California Chrome, winner of the Kentucky Derby (G1) and Preakness Stakes (G1), was looking to become the 12th Triple Crown winner, and as expected was bet down to 4-5 favoritism in the field of 11, after many of the 102,199 in attendance purchased multiple souvenir win tickets. In to challenge him and try to keep 1978 winner Affirmed as the last Triple Crown horse included 5-1 second choice Wicked Strong, fourth in the Kentucky Derby after winning the Wood Memorial (G1), and 8-1 third choice Ride on Curlin, second in the Preakness last out. 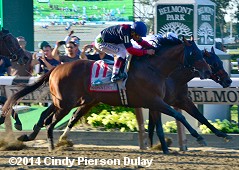 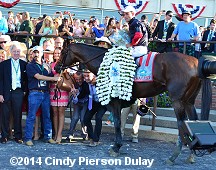 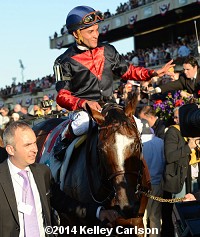 Left: Tonalist takes his walk down Victory Lane led by assistant trainer Christophe Lorieul. Winning trainer Christophe Clement said, "He trained great, he looked great before the race. I'm absolutely delighted that he won. I wasn't sure he won. We actually thought he finished second, but we got lucky, he won. It was great."

Right: Tonalist in the winner's circle. Winning owner Robert Evans said, "We were a little bit nervous about having the outside post, how he would react to the crowd and he was perfect, it didn't bother him a bit and he broke well, got a good position and he rode him beautifully. 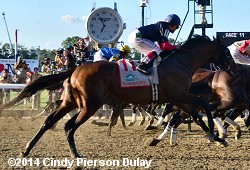 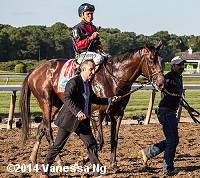 Left: Tonalist in last shortly after the start. Winning jockey Joel Rosario said, "This is very important to me like always. This is the Belmont, so this is great. This horse, he did very good today. I'm a little bit upset about California Chrome. If I was going to get beat, I wanted to just get beat by him. Tonalist is just kind of a big horse, and he has one long stride, and he just grind it, and keeps on going and going, keeps on coming, and he got the job done today."

Right: Tonalist circles after the race. Owner Robert Evans added, "It wasn't a very nice day (in the Peter Pan), there were thunderstorms, lots of rain and a muddy track and he just galloped and that's the clue he was a good horse because he was only three-quarters fit so we had four weeks to get ready for this and Christophe had him just right. We loved California Chrome, we hoped he would win the Triple Crown, but we love our horse too." 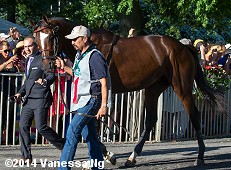 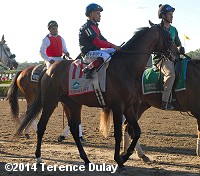 Left: Tonalist in the paddock. Owner Robert Evans added, "He's 17 hands, a great big boy, sort of like his grandfather Pleasant Colony.  Christophe doesn't push horses. He takes great care of his horses and I'm patient. I've been in the game a long time, and I know you have to be patient, take care of the horse and that's what we did. Pleasant Colony is a very good broodmare sire, underrated broodmare sire, those of you in the business know that a lot of breeders breed 200 mares a year.  My father would not breed more than 36 mares a year, thought that was plenty, so he didn't breed nearly as many, but his statistics were wonderful." 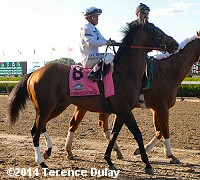 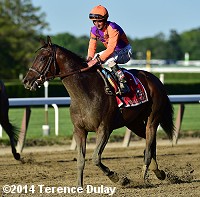 Left: Second place finisher Commissioner in the post parade. Trainer Todd Pletcher said, "He ran super. I didn't anticipate that we would be on the lead, but we weren't going to take away anything they gave us. He was almost good enough today."

Right: Third place finisher Medal Count returns after the race. Trainer Dale Romans said, "He ran very well. I thought he would be closer. It was a perfect trip. I think if we could have gotten free a little earlier because he's more of a grinder than a real turn of foot horse, I would have been real happy with him. I want (the fans in attendance) to know how much we truly appreciate it. It's about being around greatness, and California Chrome is greatness. He couldn't get it done today like the last twelve that tried, but he's greatness, and it proves people here still appreciate the greatness of this game." 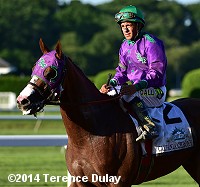 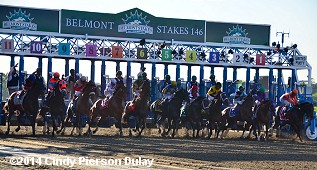 Left: Fourth place finisher and beaten favorite California Chrome returns after the race. Co-owner Steve Coburn said, "I thought he was gaining ground, but he didn't have it in him, apparently. You know what? This is his third very big race. These other horses set him out and try to upset the apple cart. I'll never see, and I'm 61 years old, another Triple Crown winner in my lifetime because of the way they do this. It's not fair to these horses that have been in the game since day one.

Right: The horses break from the gate for the 146th Belmont Stakes. Victor Espinoza aboard California Chrome (stumbling out of the 2 post) said, "A little tired. Turning for home I was just waiting to have the same kick like he always had before, and today he was a little bit flat down the lane. Taking dirt didn't both him at all. I was nice and comfortable in there, and I had a chance to move out, and when I moved out he just don't have that today. I think it was tough for him. He ran back-to-back races in different tracks - and all those fresh horses. But he feels good." 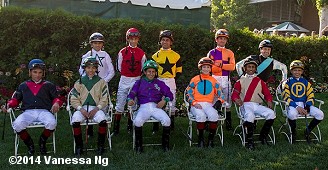 The jockeys for the Belmont Stakes. Back row: Javier Castellano, John Velazquez, Shaun Bridgmohan, Robby Albarado, Joe Bravo. Front row: Joel Rosario, Jose Ortiz, Victor Espinoza, Rosie Napravnik, Rajiv Maragh, Mike Smith. Maragh aboard Wicked Strong (dead heat for fourth with California Chrome) said, "The pace was kind of slow to materialize, but we were in a good spot all the way. We had a fair shot at it; we just couldn't quite get there. He kept on and never gave up. He tried his best. He sure belongs with these horses. He's one of the top 3-year-olds. He ran good." Triple Crown quick links: