The day before the Belmont Stakes featured two stakes races, contested under sunny skies and temperatures in the high 70's. Just 5,474 paying fans were in attendance, all of which should be part of the 100,000+ expected on Saturday for the Belmont Stakes and its rich undercard.

The $250,000 True North Stakes (G2) featured a field of 7 older horses (after 2 scratches) sprinting 7 furlongs on the main track. Bakken, winner of his first two starts before disappointing 5th in the Malibu (G1) at Santa Anita, was sent off as the 2-1 favorite over 5-2 Dads Caps, winner of the Carter Handicap (G1), and 3-1 Salutos Amigos, winner of his last three in allowance company. 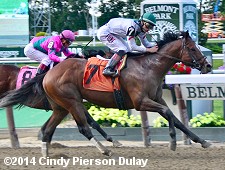 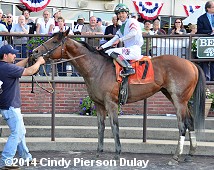 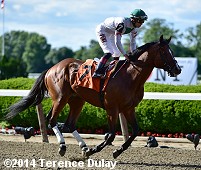 Left: Palace in the winner's circle. Jockey Jose Ortiz said, "I knew there was a lot of pace in the race, and I knew he had a chance to win because he can close, and that's what happened. He broke very sharp and was in perfect position. When I asked him to go, he went. A good horse, a lot of class. Linda did a tremendous job with him."

Right: Palace in the post parade. Winning trainer Linda Rice said, "He just didn't care for the (Aqueduct) inner track so I took him to Maryland for the General George. He bled through the Lasix and ran really a subpar effort for him, so I turned him out for 60 days, and he came back great. He was barely fit enough to run, but he trained very well coming into the race. The race looked like it had a lot of speed and it set up well for him, and he really likes Belmont. This horse will press early or he can settle; he's a gem to ride." 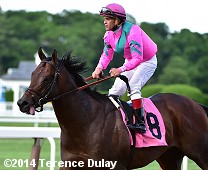 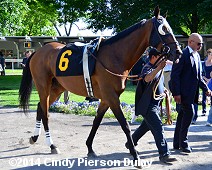 Left: Second place finisher and beaten favorite Bakken returns after the race. Jockey Javier Castellano said, "I had a beautiful trip; I was just second-best today. We hooked up with the winner at the top of the stretch, and he just showed a little more today."

Right: Third place finisher Salutos Amigos in the paddock before the race. The 3-1 third choice raced in 6th early under jockey Irad Ortiz Jr., then came out to rally late to finish third beaten 1 3/4 lengths. He improved his record to 4 wins, 1 second, and 3 third in 18 starts, earning $240,806 for co-owner and trainer David Jacobson and co-owner Southern Equine Stable. 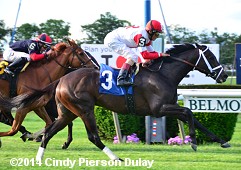 The last race of the card was the inaugural running of the $200,000 Belmont Gold Cup Invitational, contested at 2 miles around 3 turns of the Widener Turf Course. Draw Two was sent off as the lukewarm 3-1 favorite in the field of 11, winner of an allowance at Keeneland last out. In to challenge him included 7-2 second choice Twilight Eclipse, 12th in the Dubai Sheema Classic (G1) after winning the Mac Diarmida (G2), and 11-2 third choice Charming Kitten, 4th in the Dixie (G2). 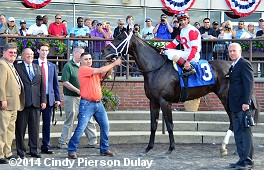 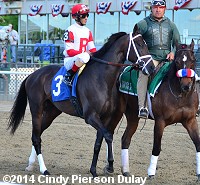 Left: Charming Kitten in the winner's circle with trainer Todd Pletcher at his hip. Winning owner-breeder Ken Ramsey said, "I've got the sire, and a rising tide raises all ships, you know? So that makes all the rest of them worth something, and it increases the distance factor - I mean, two miles, that's good advertising. We may have a grinder there today, but he got the job done. That's the first two-mile winner for the sire."

Right: Charming Kitten in the post parade. Winning jockey John Velazquez said, "It worked out perfect. He broke really well and got into a really nice position, and he was tugging me along the whole way around. He was going well the whole way around and when we got to the half-mile pole, I tried to move a little bit and put him in the clear. He was tugging me so long that when I went to ride him, it took him an eighth of a mile to get back into the race. Finally, when he got down the lane he started running again, so it worked out good." 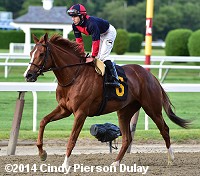 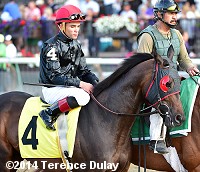 Right: Third place finisher Reflecting in the post parade. The 26-1 shot was last early under jockey Joel Rosario then rallied late to get third beaten just 1 length. The Shug McGaughey trainee improved his record to 3 wins, 1 second, and 4 thirds in 18 starts, earning $202,973 for owner-breeder Phipps Stable. 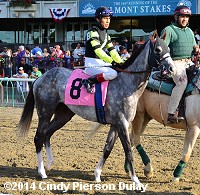 Ninth place finisher and beaten favorite Draw Two in the post parade. The 3-1 choice was 6th early under Edgar Prado but faded late to finish 9th beaten 18 3/4 lengths. The Graham Motion trainee has a record of 3 wins, 3 seconds, and 1 third in 11 starts, earning $219,140 for owner Dennis Narlinger.