The $1.5 million Preakness Stakes (G1) is the second jewel in the Triple Crown. A field of 8 three-year-olds contested this 1 3/16 mile trip around two turns at historic Pimlico Race Course in Baltimore. After enjoying sunny skies and temperatures in the mid 80's most of the afternoon, dark clouds rolled in an hour before the feature race, drenching the record 131,680 fans in a torrential downpour and quickly downgrading the main track from fast to sloppy. As expected, Kentucky Derby (G1) and Arkansas Derby (G1) winner American Pharoah was sent off as the 9-10 favorite. In to challenge him included Derby runner-up Firing Line at 3-1, and American Pharoah's stablemate Dortmund at 9-2 off his Derby third place finish.

Jockey Victor Espinoza sent American Pharoah to the lead immediately after breaking from the inside post and he set fractions of 22.90, 46.49, 1:11.42, amd 1:37.74 while as many as 2 1/2 lengths ahead of 16-1 Mr. Z, in turn 3 lengths in front of Dortmund. Entering the stretch Espinoza asked American Pharoah for run and he powered away from the field, opening up a 4 length lead at the 1/8 pole. Kept to task by Espinoza over the final furlong, American Pharoah cruised to a 7 length win over late-running 28-1 Tale of Verve in 1:58.46 over the sloppy track. It was another length back to 12-1 Divining Rod third. 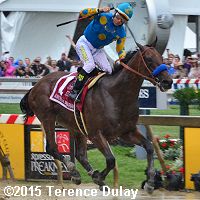 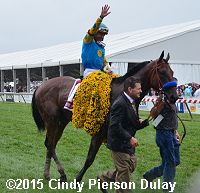 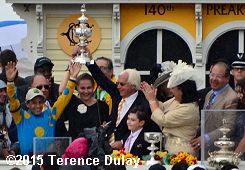 Left: American Pharoah parades on the turf course. Winning jockey Victor Espinoza said, "I was freezing. I was just so wet. It worked out well. I had to bounce out of the gate to take the lead with all the rain. (Race strategy) all changed with the rain, but it worked out well. I took a chance and sent him as quick as I can. Sometimes you have to make decisions. That's my job. Today, I made the right decision. I hope the third (Triple Crown attempt) is the charm." Espinoza failed to win the Belmont aboard dual classic winners War Emblem (2002) and California Chrome (2014).

Right: The trophy celebration in the winner's circle. Winning trainer Bob Baffert said, "What a day for Baltimore. They really needed this after all they've been through. I'm really happy for them. I just love coming here." 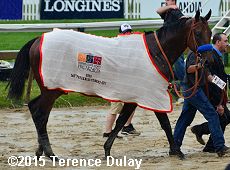 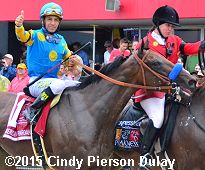 Left: American Pharoah heads back to the barn after the race. Trainer Bob Baffert said, "We just told Victor, 'Just let him roll today.' It turned out all right with the rain there. I was getting a little bit leery there, but I know he loves the mud. Once Victor got him rolling, the way he moves he's just the most beautiful moving horse. My wife said '22-and-change and I said, 'He's doing it pretty easy.' He slowed it down a little bit down the backside. Victor said he couldn't see anything in front of him. When I saw his ears were pricked I knew the cotton balls were dry. I knew he was just cruising around there."

Right: American Pharoah parades for the fans after the race. Winning owner Ahmed Zayat said, "I was so confident. He was going so easy, like he usually does – effortless. He's loving it. I was confident. It was unreal. He's a once-in-a-lifetime horse. So special." 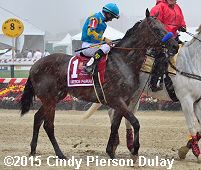 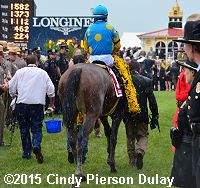 Left: American Pharoah heads to the winner's circle. Owner Ahmed Zayat said, "It's unbelievable. I couldn't be any happier, not just for my family, and Bob and Victor, but for the whole racing world. We need a star. He's indeed the real deal. Please God, let's continue, let the fun start."

Right: American Pharoah in the post parade. Trainer Bob Baffert said, "He's just an amazing horse. Everybody talks about the greatness and he's starting to show it. To me, they have to prove it. Today, the way he did it. He's just so fast, the way he ran. It was like poetry in motion." 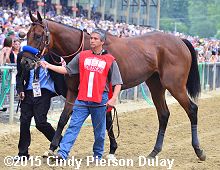 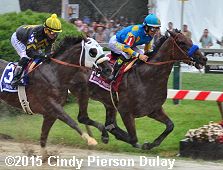 Left: American Pharoah heads into the indoor paddock to be saddled. Owner Ahmed Zayat said, "I either wanted a fast track and fair for everybody or I wanted a monsoon. I wanted it because the track when it is drying out is much harder on horses. It becomes deeper and harder for them. I wanted a monsoon. He swam through it and we love him."

Right: Shortly after the start of the Preakness with American Pharoah (inside) ahead of Mr. Z (outside). Mr. Z's trainer D. Wayne Lukas said, "The adverse conditions likely affected 7 of 8 horses. It obviously didn't bother the winner. My horse ran very well. He was well-placed and I thought he actually might finish second. I've said it since March, American Pharoah is special, and this might be the year." 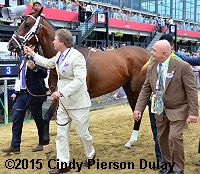 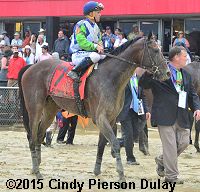 Left: Second place finisher Tale of Verve is led into the indoor paddock by trainer Dallas Stewart with owner Charles Fipke walking along side. Stewart said, "What a horse. I had no idea where he was in the race. He's a tremendous horse. He's getting better all the time. Congratulations to the winner. We will see him at Belmont. I think this validated what he is. He's an improving horse. It was a wonderful run." Jockey Joel Rosario added, "I had a good trip, perfect trip. The further we went he kept picking it up. It was a great race for him. He ran a very big race."

Right: Third place finisher Divining Rod returns after the race. Trainer Arnaud Delacour said, "We are very happy with that, being third in a Grade 1 in the Preakness. He was right there with a great trip, and thanks for (Javier) Castellano for that, because he gave him a great ride."