The filly counterpart to the Preakness is the $250,000 Black-Eyed Susan Stakes (G2) held on the Friday before Preakness day. The 42,700 in attendance at historic Pimlico in Baltimore enjoyed sunny skies and temperatures in the low 80's. A field of 9 three-year-old fillies went to post for this 1 1/8 mile main track contest, with Luminance sent off as ths 6-5 favorite off her second place finish in the Santa Anita Oaks (G1). In to challenge her included 4-1 second choice Ahh Chocolate, winner of her first 2 starts and making her stakes debut here, and 9-2 third choice Danessa Deluxe, third in the Gulfstream Oaks (G2) last out. 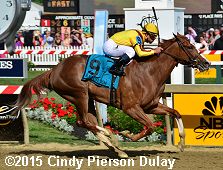 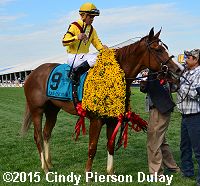 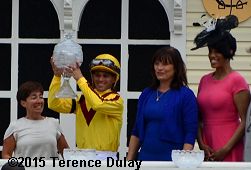 Left: Keen Pauline heads to the winner's circle. Tammy Fox, assistant to winning trainer Dale Romans said, "Dale took his time with her in Florida. She had a couple of months off. She came back for the Keeneland race and it set her up perfect for this race here. Yesterday, when I galloped her over this surface, she loved it. She loved everything about it."

Right: The trophy presentation for the Black-Eyed Susan with Tammy Fox, Javier Castellano, owner Barbara Banke, and Baltimore Mayor Stephanie Rawlings-Blake. Fox added, "What more can you say? You have the best of the best on the horse. Javier knew how fast he was going. That helped a lot. When you can see a horse's ears just pricked like that and he's sitting. He did a great job on her." 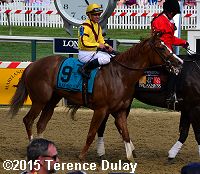 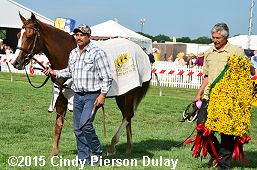 Left: Keen Pauline parades for the fans after the race. Winning jockey Javier Castellano said, "You have to take advantage when anything happens in a race. I didn't expect to be on the lead. I saw a lot of speed in the race. I thought that Martin Garcia on Luminance had the speed and was going to dictate the pace. He broke OK and didn't send his horse to the lead. My horse broke so well out of the gate I dictated the pace and I enjoyed the ride."

Right: Keen Pauline heads back to the barn after the race. 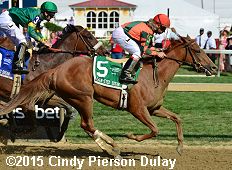 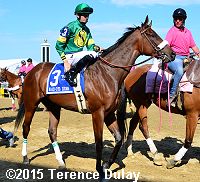 Left: Second place finisher Include Betty crosses the finish line. Jockey Drayden Van Dyke said, "There was no pace in the race. She really had to run well for us to get up for second. But that's her style. She likes to come from out of it. We tried to stay clear and not get stopped and get that run out of her at end."

Right: Third place finisher Ahh Chocolate in the post parade. Trainer Neil Howard said, "For a filly with only three races I thought she ran very well. The slow pace definitely didn't help us, but I was happy with the way she ran." Jockey Brian Hernandez Jr. added, "The pace was definitely slow and that hurt our chances. When I called on her she responded well. I would have loved to have won, but I was happy with what she did today." 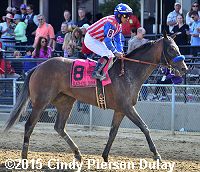 Left: Fifth place finisher and beaten favorite Luminance returns after the race. Trainer Bob Baffert said, "I told Martin, ‘You just took her best weapon away from her.' She needed the lead. She couldn't get it, so after that she wasn't effective at all. We would have preferred to be on the lead." Jockey Martin Garcia added, "We never got to the front. That's all."

Right: Shortly after the start of the Black-Eyed Susan. 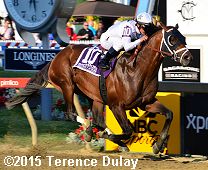 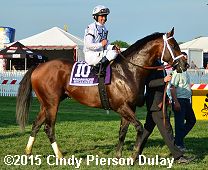 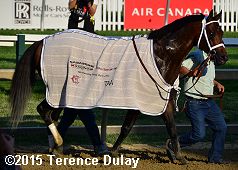 Left: Commissioner heads to the winner's circle. Winning trainer Todd Pletcher said, "This was awesome. I'm very happy. I loved the position he was able to get into. Once he gets into that rhythm, you can keep on cruising. Right after the Skip Away, we talked about it and decided to go to the Pimlico Special. We'll see how he comes out of it. It's 22 days to the Brooklyn Handicap, so that's possible."

Right: Commissioner goes back to the barn in his new blanket. Winning jockey Javier Castellano said, "He was very strong today. He minded so well. I was able to tuck in around the first turn and he was just galloping along. He can go 24 and 48, that's him. I didn't ask him until we turned for home. The more distance the better for him." 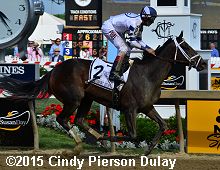 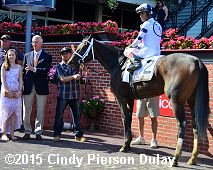 Stopchargingmaria won the Black-Eyed Susan here one year ago. Winning trainer Todd Pletcher said, "She had a really good work last week at Belmont for this race. It was as good as I had ever seen her. She got away bad and I was a little worried, but when I saw the fast fractions, I figured we would be OK." Jockey John Velazquez added, "I wasn't exactly where I wanted to be. She stumbled a bit coming out of there. Once we cleared everyone, it was pretty easy." 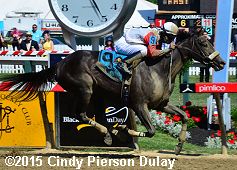 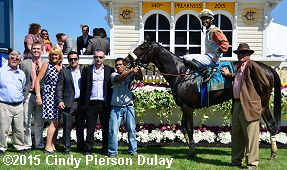 Winning owner-trainer Derek Ryan said, "This is a nice filly. We stopped here shipping up from Florida on the way to New York and she had a nice work. After she won in New York, we decided to come back down here. Now she has her Grade 3. Her two-turn race at Tampa, there wasn't really anything else for her. So I figured we'd try it, but she got wiped out at the start." Jockey Kendrick Carmouche added, "I knew we had a lot of speed in the race. I wanted to get a close position. Once I got my position I just sat on her. Once we got to the 1/8 pole, we had to find a hole. Once I found the hole, she just exploded. I'm four-for-four on her." 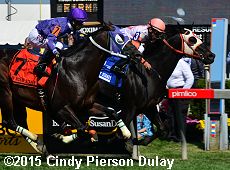 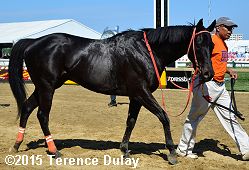 Winning trainer King Leatherbury said, "In my mind, I thought that we would win, but I wasn't so sure at the 3/16 pole. It's always tougher to get through on the inside. But we got there just in time. Just like a Hollywood script would write it. He'll probably run back in two weeks at Penn National (Governor's Cup)." Jockey Julian Pimentel added, "In the stretch, I really wanted to stay outside, but the leader was getting out. So I said, ‘OK, let's go inside.' It's really unbelievable; he knows where the wire is. Right after we crossed the wire his ears pricked up. He said, ‘I'm done.'" 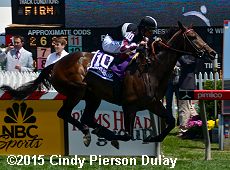 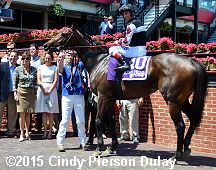 Winning jockey John Velazquez said, "She was going so well that I was real comfortable with where she was early. She was going at it really easy. Once I passed the horse on the lead, I had to keep her a little busy because before the race she was looking around and not really paying attention. During the race she was a professional." Trainer Graham Motion added, "I am really high on this filly. She just keeps getting better and better. We really felt confident coming into this race because she just missed in her last two. We're going to aim her for the Coronation at Ascot." 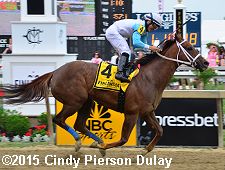 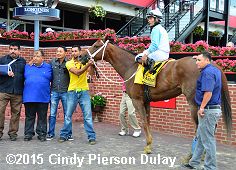 Winning Trainer Rodolfo Romero said, "I was really nervous. I was worried about (Lady Sabelia), because she was really good. I was surprised my horse was so close to the lead. But sometimes, you don't know what to expect from her. She's very tough and she's getting very good." Jockey Abel Lezcano added, "You look at the program and you see the speed in here today. At the start she wanted to go early. She relaxed on the backstretch. At the 3/8 she moved out and started going. She really ran well."