The feature race on the second Saturday of the Del Mar summer meet was the $300,000 San Diego Handicap (G2) for older horses at 1 1/16 miles on the main track as the main local prep for the Pacific Classic. Conditions were excellent at the seaside oval with sunny skies and temperatures in the low 70's for the 13,198 fans in attendance. Dubai World Cup (G1) winner and Saudi Cup (G1) runner-up Country Grammer was sent off as the 2-1 favorite in the field of 9. In to challenge him included 7-2 second choice Defunded, second in the Hollywood Gold Cup, and 4-1 third choice Mandaloun, 9th in the Stephen Foster (G2) after disappointing in 9th in the Saudi Cup. 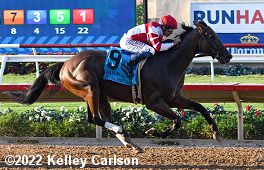 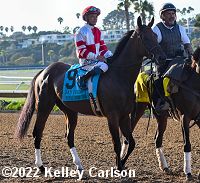 Left: Royal Ship in the winner's circle. Gary Mandella, son of winning trainer Richard said, "We're going to enjoy this and figure the next race after that; this is a good one and we're gonna enjoy it for a while. He (Mike Smith) had a lot of horse under him and he's keeping the favorite in his sights. That's what makes Mike great, he made all the right calls, put the horse in position he could win and got it done." Gary Mandella has been running the Mandella barn for the better part of the past week as his father recovers from COVID at home.

Right: Royal Ship in the post parade. Winning jockey Mike Smith said, "I wasn't going to take anything away from him today. If he wanted to go, he could go. He was rolling on the backside and just kept going. I hope this win helps Mr. Mandella (Richard who is home with COVID) feel better. He and his son get all the credit with this horse." 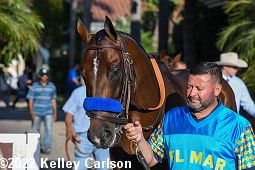 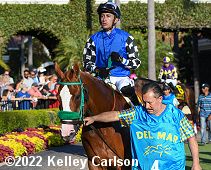 Left: Second place finisher and beaten favorite Country Grammer in the paddock before the race. The Bob Baffert trainee improved his record to 4 wins, 3 seconds, and 1 third in 11 starts, earning $10,897,320 for owners Commonwealth Thoroughbreds, WinStar Farm, and Zedan Racing Stables.

Right: Third place finisher Stilleto Boy in the paddock before the race. The Ed Moger Jr. trainee improved his record to 3 wins, 3 seconds, and 7 thirds in 17 starts, earning $1,091,175 for owner Steve Moger.


An hour before the San Diego Handicap, the $400,000 Bing Crosby Stakes (G1) featured a field of 9 older horses sprinting 6 furlongs on the main track seeking automatic entry into the Breeders' Cup Sprint at Keeneland under the Breeders' Cup Challenge "Win and You're In" promotion. Shaaz was sent off as the 8-5 favorite off his 3rd place finish in the Steve Sexton Mile (G3) at Lone Star after winning his first three starts all at Santa Anita. In to challenge him included 11-2 second choice Drain the Clock, 4th in the Smile Sprint (G3) after disappointing 7th in the Dubai Golden Shaheen (G1), and 6-1 third choice Bagboss making his stakes debut off a 2 race win streak in allowance company at Churchill Downs.

Jockey Drayden Van Dyke sent Drain the Clock to the lead out of the chute through fractions of 22.28 and 44.99 while pressed by Shaaz and stalked by 19-2 Principe Carlo. Turning for home Drain the Clock tired as 15-2 American Theorem, 6th early under Joe Bravo, came out 5 wide to sweep to the front, opening up a 3 length lead through 5f in 56.59. Despite Bravo losing his whip, American Theorem cruised the rest of the way to win by 1 1/2 lengths over late-running 7-1 Get Her Number in 1:08.67. It was another 4 1/4 lengths back to 9-1 Letsgetlucky third, and 3/4 more to favorite Shaaz fourth. 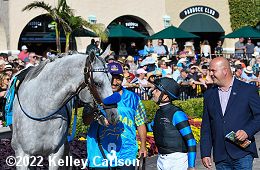 Left: American Theorem in the winner's circle. Winning trainer George Papaprodromou said, "The race turned out the way we planned and we made one run. We knew with the post we would have to go a little wide but it worked out perfect."

Right: American Theorem in the paddock. Winning jockey Joe Bravo said, "He just wanted to run. That's why I went. He was real comfortable on the backside, moving easy. And then when we came to the turn I didn't think I wanted to go six wide. But he just had his momentum up and we just kept on going. I got real nervous, though. I dropped my stick on the turn and that will make you nervous. But he didn't need it." 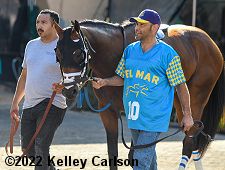 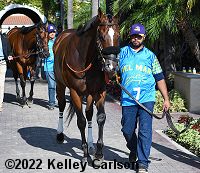 Left: Second place finisher Get Her Number in the paddock. The Peter Miller trainee improved his record to 4 wins, 1 second, and 1 third in 12 starts, earning $505,161 for owner Gary Barber. 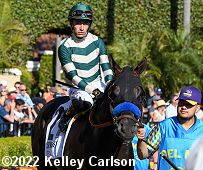 Fourth place finisher and beaten favorite Shaaz in the paddock. The Bob Baffert trainee has a record of 3 wins, 0 seconds, and 1 third in 5 starts, earning $190,107 for owner Michael Lund Petersen.