Kicking off the Longines Hong Kong International Races for 2016 was the HK$16.5 million (US$2.12 million) Longines Hong Kong Vase (G1), a 2400 meter (about 1 1/2 mile) trip for older horses over the right-handed turf course at Sha Tin. As expected, last year's winner Highland Reel was sent off as the 1-2 favorite in the field of 14, exiting his gate-to-wire romp in the Breeders' Cup Turf (G1). In to challenge him included 8-1 second choice Nuovo Record, winner of the Red Carpet Handicap (G3) at Del Mar after finishing 11th in the Breeders' Cup Filly and Mare Turf (G1), and 9-1 third choice Silverwave, third in the Prix de l'Arc de Triomphe (G1) after winning the Grand Prix de Saint-Cloud (G1) and the Prix Foy (G2). 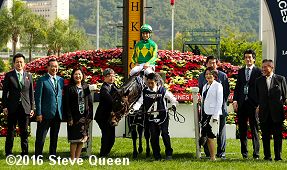 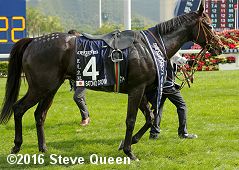 Left: Satono Crown in the winner's circle. Winning trainer Noriyuki Hori said, "We had been considering this race and after his performance in the Tenno Sho Autumn we decided to make this a priority. We're happy that the horse has been able to come through and perform at his best. This horse was at a very high level even as a two-year-old, winning a Group race. We'll now take time to look at the horse and take time to talk to connections and discuss what this horse's next race will be." 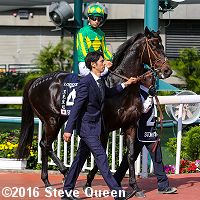 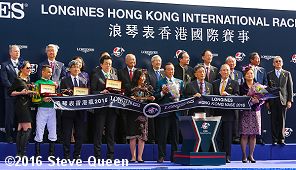 Left: Satono Crown heads for the post parade before the race. Winning jockey Joao Moreira said, "I thought this horse was a very good chance before the race and the feeling that he gave me on the track the other day was great, so I knew I had a lot of horse underneath. I got behind a horse that was dragging me back instead of taking me forward, so I had to wait a little bit, get on the fence and track (Silverwave). Once I was able to get him on the outside and get a clear run, I could feel that he was full of himself and was going to dash home. The way he won today, he's shown that he's got a lot of talent. He beat a world class horse in Highland Reel and being his rider today is a blessing."

Right: All the connections and officials pose with the trophy and winner's banner after the trophy presentation for the Hong Kong Vase. 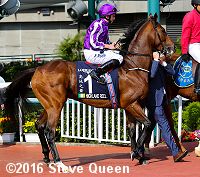 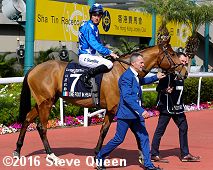 Left: Second place finisher and beaten favorite Highland Reel heads for the post parade before the race. Trainer Aidan O'Brien said, "He ran very well, he's had a long season but he ran a great race – he ran his heart out. He's had a phenomenal season." Jockey Ryan Moore added, "He's run very well, a cracking race given the pressure. But it's disappointing to get beaten. We pulled a long way clear – the winner is a good horse."

Right: Third place finisher One Foot in Heaven heads for the post parade before the race. Jockey Christophe Soumillon said, "Leaving the stalls it was quite a rough race early on and there was a lot of movement all through the race. I got out OK but all through the race there were jockeys fighting for the same spot. It was a fine effort but the first two were a class above."