The Longines Hong Kong International Races are the richest horse races run in Hong Kong, and is the last major race day for Thoroughbred flat racing anywhere in the world. Billed as the "Turf World Championships", four Group 1 races were contested on Sunday afternoon over the right-handed 1 3/16 mile turf course at Sha Tin Racecourse. Conditions were typical for December in this subtropical city, with a good turf course, sunny skies, and temperatures in the low 70's, with a record crowd of 100,710 on hand. Hong Kong Jockey Club CEO Winfried Englebrecht-Bresges said, "This was one of the most astonishing days of international racing we have seen in Hong Kong. It's the highest turnover ever for this day, but the attendance was even more pleasing, with a record for the day of more than 100,000 people. The reaction from our customers and racing fans was exceptional today. Our commitment to excellence and to promoting the international element of the sport has clearly been well-received by our customers, both here in Hong Kong and around the world."

In the main event, a field of 12 older horses contested the HK$25 million (US$3.2 million) Longines Hong Kong Cup (G1) at 2000 meters (about 1 1/4 miles) on the turf. Last year's Hong Kong Mile (G1) winner Maurice was sent off as the 8-5 favorite off his Tenno Sho Autumn (G1) win after finishing second in the Yasuda Kinen (G1). In to challenge him included 7-1 second choice Designs on Rome, 4th in this event last year and 9th in the Jockey Club Cup (G2) last out, and 15-2 third choice and defending champion A Shin Hikari, 12th in the Tenno Sho Autumn (G1) after finishing 6th in the Prince of Wales's (G1) at Royal Ascot.

Jockey Yutaka Take sent A Shin Hikari loose on the lead around the clubhouse turn and he set fractions of 26.79, 50.10, 1:13.34, and 1:36.80 while pressed by 93-1 Helene Super Star and stalked by 17-1 Staphanos and 22-1 Lovely Day. Entering the stretch, A Shin Hikari tired badly to eventually finish 10th. Maurice, 10th early under Ryan Moore, came through on the rail to win going away by 3 lengths in 2:00.95. It was another 1/2 length back to Staphanos third, who held off late-running fourth place finisher 22-1 Lovely Day by a nose. 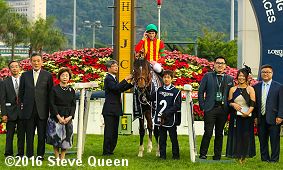 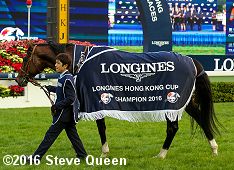 Left: Maurice in the winner's circle after the Hong Kong Cup. Winning trainer Noriyuki Hori said, "The horse, the jockey and the staff all tried very hard so it is a mutual effort and it feels great. This horse really does seem to love Hong Kong but we get a lot of support from the Hong Kong Jockey Club including Mark Player and everyone who has helped us here and helped us get the horse to be his best. It is a team effort, Japan and Hong Kong together. That's (retirement) what they have been writing in the newspapers anyway." Hori is the first foreign trainer to win two Hong Kong International Races on the same day, after winning the Vase with Satono Crown earlier in the card.

Right: Maurice heads back to the barn in his winner's blanket. 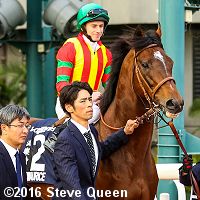 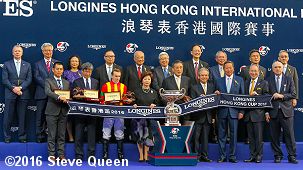 Left: Maurice heads out to the track before the race. Winning jockey Ryan Moore said, "Fortunately there was good pace in the race and halfway down the back I thought it was setting up nicely for him and it was just a matter of finding the room. As soon as he got room and I put him into gear he just let down exceptionally well. He got to the leader early and then he was just easing up really. He has improved every time I've ridden him. It's a lot of fun. Hori said to me on the way out, ‘Are you OK?' and I told him 'I'm always OK when I'm riding Maurice.' He's a brilliant horse. He is very good at a mile but he is possibly better at 10 (furlongs). He has improved, he is a big strong horse and he has got better with racing. He has been a pleasure to ride." 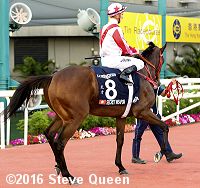 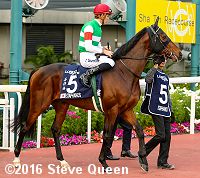 Left: Second place finisher Secret Weapon heads out for the post parade before the race. Jockey Zac Purton said, "He has run a great race, he has come of age. He is Hong Kong's best mile and a quarter horse now."

Right: Third place finisher Staphanos heads out for the post parade before the race. Jockey Christophe Soumillon said, "It was a very good run. At one stage I thought I would be fifth but he produced a great turn of foot to be third."

All the jockeys and officials at the opening ceremony for the Longines Hong Kong International Races. Englebrecht-Bresges added, "To give some context, 10 years ago, this meeting had turnover of just HK$930 million and a crowd of 56,000. The performances of the horses on the track today were world class. I’d especially like to thank all owners, trainers and jockeys who have come here and made this such a great day of sport. Some people were skeptical about the chances of the Hong Kong horses before the races but they showed the ‘can do’ spirit of Hong Kong and they showed, especially with the first four home in both the Sprint and the Mile, that we have world class horses capable of beating top-class international horses."