In the HK$23 million (US$3 million) Longines Hong Kong Mile (G1), the world's richest turf mile race, a field of 14 older horses went to post for the 1600 meter (about 1 mile) trip around one turn of the Sha Tin turf. 2014 winner and last year's 3rd place finisher Able Friend was sent off as the 2-1 favorite off his 4th place finish in the Jockey Club Sprint (G2). In to challenge him included 9-2 second choice Helene Paragon, 7th in the Jockey Club Mile (G2) after finishig second in the Sa Sa Ladies' Purse (G3), and 5-1 third choice Beauty Only, winner of the Jockey Club Mile (G2).

Jockey Derek Leung sent 46-1 Beauty Flame to the lead exiting the chute and he set fractions of 24.48, 47.02, and 1:10.03 over the good going while pressed by 11-1 Neorealism and stalked by 12-1 Logotype. At the top of the lane Beauty Flame tired as Neorealism inherited the lead by the 1/8 pole. Beauty Only, 12 early, came out wide under Zac Purton and closed with a rush to outfinish Helene Paragon, 10th early, by 1/2 a length in 1:33.48. It was another 1/2 length back to 14-1 Joyful Trinity third, while favorite Able Friend checked in 6th. 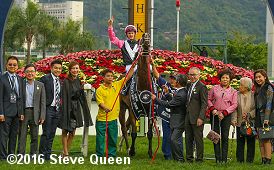 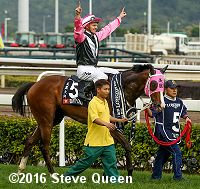 Left: Beauty Only in the winner's circle.

Right: Jockey Zac Purton celebrates aboard Beauty Only after the race. Purton said, "He was really good today. I think we're just starting to see the best of him. He's always been so honest but now that he's fully matured and acclimatised we're really seeing what he can do. He is much improved this season and he was very strong out there today. Hughie (Bowman aboard Helene Paragon) pushed off the fence about the 700 (metres), which made me have to go a bit earlier than I wanted to but the horse has got a big set of lungs and kept running. We set sail after the leaders and he responded really well. I believe he can stretch out to 2000 (metres) so there was no doubting him being strong at the end of the mile. The firm ground suited, the harder the better for him, and so did the good speed. We know he does his best now if we let him balance up early." 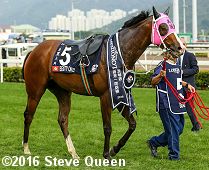 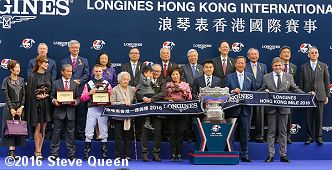 Left: Beauty Only prepares to head back to the barns. Winning trainer Tony Cruz said, "I think we haven't seen the best of him yet. From the day we bought him, we had high expectations with him and I'm so pleased to see how he has improved this season. He's a good horse to handle, a real professional and he's gone on as we thought he would after winning the lead-up race. We'll generally keep him to local races but I'd look to the Yasuda Kinen in Japan as the mile and the firm ground there is perfect for him." 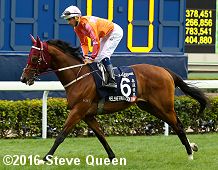 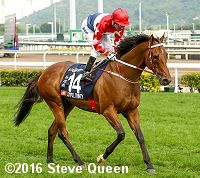 Left: Second place finisher Helene Paragon warms up before the race. Jockey Hugh Bowman said, "I was held up when Zac made his run but I still felt I had the horse to peg him back. Look, he was too strong late and although I was held up for a few strides, I had plenty of time. He has a bright future and will be a headline horse here in Hong Kong,"

Right: Third place finisher Joyful Trinity returns after the race. Jockey Gerald Mosse said, "He ran beautiful. He is a beautiful horse who gave me his best and was beaten by a champion horse. I got a beautiful run and he came through like he was going to perform. He hasn't been beaten far and I was very happy with his run. He will continue coming up."