The shortest of the International Races at Sha Tin is the HK$18.5 million (US$2.4 million) Longines Hong Kong Sprint (G1) at 1200 meters, the richest 6 furlong turf sprint in the world, and the final leg of the Global Sprint Challenge. American entrant and Breeders' Cup Sprint (G1) third place finisher Pure Sensation was scratched by the veterinarian on race day due to lameness in his left foreleg, leaving a field of 13 to go to post. Lucky Bubbles was sent off as the 6-5 favorite off his second place finish in the Jockey Club Sprint (G2) after winning the Premier Bowl (G2). In to challenge him included 6-1 second choice Big Arthur, 12th in the Sprinters Stakes (G1) after winning the Centaur (G2), and 13-2 third choice Aerovelocity, the 2014 winner but third in his last two starts, the Premier Bowl and Jockey Club Sprint.

Jockey Silvestre de Sousa sent 10-1 fourth choice and defending champion Peniaphobia to the lead out of the gate and he set fractions of 23.90 and 46.02 while pressed by 102-1 Super Jockey and stalked by Aerovelocity. At the 1/4 pole Peniaphobia continued to lead but Aerovelocity moved up to collar him at the 1/8 pole. Favorite Lucky Bubbles, 9th early, closed with a rush but just missed as Aerovelocity held him off to win by a head in 1:08.80.- It was another 3/4 length back to pacesetter Peniaphobia third. 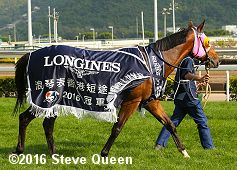 Left: Aerovelocity in the winner's circle. Winning trainer Paul O'Sullivan said, "I certainly expected him to be competitive, it was just a matter of whether time had caught up with him. He'd had probably the best preparation that he'd had going into an international, but he had indicated that he was getting a little bit older – he was taking a little bit longer to come to hand. I thought he'd get some prize money for sure, but to win it is just fantastic. He's had plenty of issues. He had a heart irregularity, he had a significant amount of blood in his trachea on that day, he travelled to Japan last season and got colic. But I said to Daniel (Yeung, owner) before the race today, I can't get him any better than this. I think he's peaked on the day, it's just a matter of whether he's still got it in him."

Right: Aerovelocity parades for the fans with his new winner's blanket. 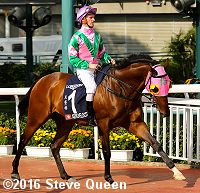 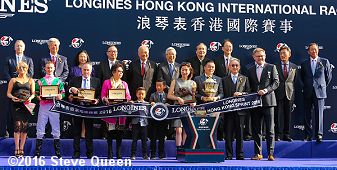 Left: Aerovelocity heads out for the post parade before the race. Winning jockey Zac Purton said, "Out of all his wins, I think this is the most satisfying one because we've had some troubles with him. He has had some problems, he's older now and Paul had to pull everything out of his trick bag to get him in the condition he is today. I'm just the lucky one to be piloting him. He went straight for the majority of the straight and then, obviously, as he was feeling the pinch and under solid pressure he wanted to get in. With 100 metres to go I was very confident of winning but with 50 (metres) to go, I could feel Lucky Bubbles starting to breathe down on me and I was looking at that post and I was praying for it to come quicker and quicker! We had a lovely run in the race, though, and he came out and he was just able to amble up. It was hard fought in the end, but he is all heart. " 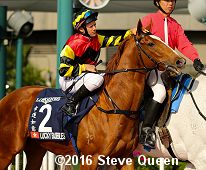 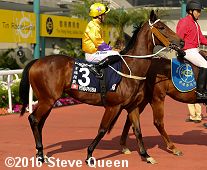 Left: Second place finisher and beaten favorite Lucky Bubbles heads out for the post parade before the race. Jockey Brett Prebble said, "It was a pretty rough race and I got shuffled back a little bit more than I would have liked. There are a few jocks playing jockeys out there. If I got out earlier he wins, full stop. He is the best horse in the race. There is no better horse in Hong Kong than Lucky Bubbles at the moment."

Right: Third place finisher Peniaphobia heads out for the post parade before the race. Jockey Silvestre de Sousa said, "He ran a good race. It is not an excuse but the horse on my outside pressured me a little bit earlier than I would have liked. Still, I am happy with him."