The $5 million Breeders' Cup Classic (G1) is the richest horse race in the western hemisphere. A field of 12 older horses went to post in this 1 1/4 mile trip over the main track. 6-year-old mare Zenyatta, winner of last year's Classic and undefeated in 19 career starts, was sent off as the even money favorite, exiting a win in the Lady's Secret (G1) last time out and attempting to extend her career unbeaten streak to an unprecedented 20. In to challenge her included 9-2 second choice Lookin at Lucky, winner of the Preakness (G1), Haskell (G1), and Indiana Derby (G2) and 5-1 third choice Blame, winner of the Stephen Foster (G1) and Whitney (G1) handicaps but second in the Jockey Club Gold Cup last out.

Jockey Robby Albarado sent 37-1 First Dude to the front first time past the stands and he set fractions of 23.24, 47.14, and 1:11.01 while stalked by 6-1 Quality Road and 30-1 Espoir City. As usual, Mike Smith kept Zenyatta at the tail of the field, as many as 16 1/4 lengths off the pace. Entering the stretch, Quality Road and First Dude tired allowing Espoir City to inherit the lead through 1 mile in 1:37.12, but Blame, 7th early, and Zenyatta were hitting their best strides. Blame opened a 1/2 length lead on Lookin at Lucky in mid-stretch, while Zenyatta had hit her best stride and was closing with a rush on the outside. In the final yards, Blame dug in and held off Zenyatta by a head in 2:02.28 over the fast track. It was a long 3 1/2 lengths back to Fly Down third. 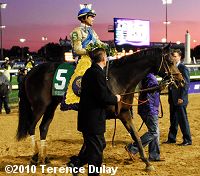 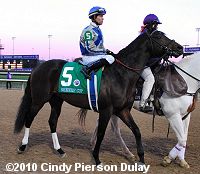 Left: Blame parades with his flowers after winning the Classic. Trainer Al Stall Jr. said, "It's one of those rare things where everything comes together once, but obviously that's what it takes to win a race of this magnitude. In defeat, Zenyatta didn't lose anything. I don't think you'll find anybody criticizing anything she's ever done, much less today. It was just two very good horses, and everybody talked about it coming down to these two for a long time. It played out that way. We were fortunate enough to have the right horse on the right day at the right time."

Right: Blame in the post parade. Jockey Garrett Gomez said, "When I split horses at the top of the stretch, he ran away from Lookin At Lucky when I asked him to, and it felt like I started to lengthen. I wasn't about to look for her because I knew she was going to be coming. He's not going to give you 110 percent until you ask for it. He will wait on one. And I thought I'd give him that little bit of opportunity, not to wait on her, but just to have a little left in the tank when she come to him or got close to him that he'd go ahead and give me that little extra that I felt like I'm going to need the last 100 yards. And he did so." 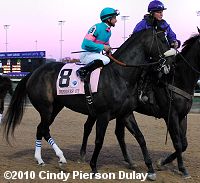 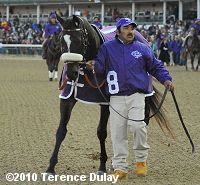 Left: Second place finisher Zenyatta walks over to the paddock before the race, showing off to her cheering fans. Trainer John Shirreffs said, "We're so happy with what Zenyatta has done. She ran her heart out today. She ran her race and congratulations to Blame. I'm just so proud of her; and congratulations to Blame. (The fans) were behind her win or lose and I think she represented them really well. She ran an excellent race." The next day, her owners Ann and Jerry Moss announced her retirement from racing.

Right: Zenyatta in the post parade. Her jockey Mike Smith said, "She's my everything. She's just amazing. I just wish I would have been in the race a little earlier, because I think the outcome would have certainly been different. When I got her out, it was a gallant effort on her part. She made up a whole lot of ground. To only come up a nose short, it's pretty tough to swallow." Choking back tears he added, It hurts more than you -- than I can explain, just because it was my fault. She should have won, and it hurts. I believe she ranks up there with the greatest of all time. If I'd have won this, you could arguably say she was. To come up a nose short is just -- it's too hard." 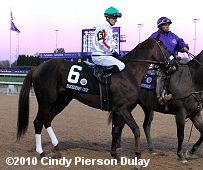 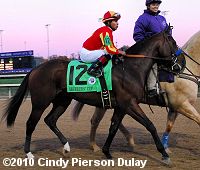 Left: Third place finisher Fly Down in the post parade. Trainer Nick Zito said, The horse had plenty of run. Obviously, (jockey Julien Leparoux is) upset about it because that cost him a lot. He was in a nice position, he was settling and he had to lose all that ground. Julien is right about that because in a big race like that you can't give Zenyatta and Blame whatever. But he ran his guts out. All in all, I'm very happy. No question. Very happy."

Right: Fourth place finisher Lookin At Lucky in the post parade. Trainer Bob Baffert said, "They didn't go fast enough. He broke well, but I guess Martin (Garcia) thought they were going to be flying. He's never that far back. I thought he was going to win turning for home, but we were at a disadvantage today coming from California and not working over the track. I saw that in my other horses. He got tired in the end. We were just too far back, both of us (Lookin At Lucky and Zenyatta)."