The $3 million Emirates Airline Breeders' Cup Turf (G1) is the richest turf race in North America. After Prix de l'Arc de Triomphe (G1) winner and expected favorite Workforce was scratched, just 7 of the original field of 8 drawn went to post in this 1 1/2 mile trip around 3 turns over the Churchill Downs turf. Prix Niel (G2) winner and Arc fourth place finisher Behkabad was sent off as the 11-10 favorite over 4-1 second choice Winchester, winner of the Joe Hirsch Turf Classic (G1) at Belmont Park last out. 9-2 third choice Al Khali, winner of the Bowling Green (G2) before finishing a close fourth in the Pattison Canadian International (G1) completed the top three on the board. 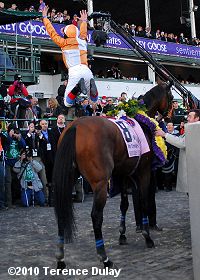 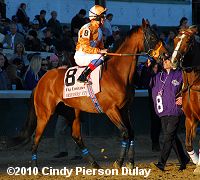 Left: Frankie Dettori makes his trademark flying dismount from Dangerous Midge in the winner's circle. Dettori said, "I had a great trip. The blinkers kept him alive, but he didn't handle the corners very well. He's such a big horse. I kept him balanced and we had no pressure all the way. In the straight it took him a long time to motor, but we got there in the end. It felt really good to get this one. He's a nice horse."

Right: Dangerous Midge was a bit fractious in the post parade. Trainer Brian Meehan said, "I was a little upset when he got upset. When the horses come out of the paddock and they get onto the track at home, they turn and they canter. He went quite well with his pony all week, and I thought that would negate that with him. He's always been an improving type of horse. We always felt all the way through that he was going to get there. His last start at Newbury (won the Arc Trial), he was really impressive, and that really made my mind up." 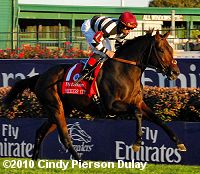 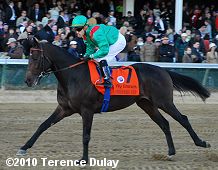 Left: Second place finisher Champ Pegasus leading first time by. Trainer Richard Mandella said, "Everybody in the race realized there was nobody that wanted to do to the lead. My horse doesn't have a lot of experience and I thought I didn't want him buried behind a slow pace, being in the one-hole. I said, `he breaks good, don't be afraid to go to the lead and just nurture him.' He did a great job and he ran his heart out."

Right: Third place finisher Behkabad runs off after the post parade. Trainer Jean-Claude Rouget said, "He did his race, but the horses in front of us just continued on." Jockey Christophe Lemaire added, "We had a good race behind the leader. The leaders never quit. We tried to catch them but they never stopped. There was no trouble (in the race) at all."