Kicking off Championship Saturday was the $1 million Breeders' Cup Juvenile Turf (G2) for 2-year-old colts and geldings going 1 mile around two turns of the Churchill Downs turf course. Master of Hounds, third in the Racing Post Trophy (G1) at Doncaster last out, was sent off as the 7-2 favorite in the full field of 12. In to challenge him included 4-1 second choice Soldat, winner of the With Anticipation (G3) and second in the Pilgrim (G2), and 5-1 third choice Banned, an allowance winner at Keeneland last out and making his stakes debut.

10-1 Madman Diaries battled for the lead with 29-1 Humble and Hungry through fractions of 24.01, 47.97, and 1:13.05 over the firm going, while favorite Master of Hounds sat near the back of the field. Entering the stretch, Banned put in his challenge but Madman Diaries stubbornly held the lead through 7/8 in 1:24.92. 6-1 Pluck, last through the first 5 furlongs, came through between horses at the 3/16 pole to win by 1 length over Soldat in 1:36.98. It was another 1 1/2 lengths back to 23-1 Willcox Inn third, while favorite Master of Hounds finished 6th beaten 3 lengths.

The race was marred by the fall of Rough Sailing entering the clubhouse turn, who slipped and landed hard on his left side then got up and ran loose. Jockey Anna Napravnik was thrown to the turf but walked away uninjured, and the colt was caught by the outriders and returned to the barn. X-rays found that he sustained a fracture of the humerus in the right forelimb, and was euthanized. 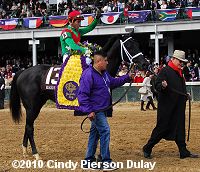 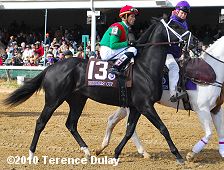 Right: Owner Barry Irwin of Team Valor leads Pluck into the winner's circle. Irwin said, "(His dam is) huge. She's about 16.2 1/2. She's a Grade 1 performer herself. Got a fabulous pedigree. And this was the first foal, and he just always looked good. So we decided to keep him. Anybody that bred this foal Pluck, we allowed them the chance to be bought out at $180,000, and we offered parts of him to some new people. In this horse, we have ten newcomers that bought 5 percent each for $9,000 and made four payments. So they had a lot of fun today. I'll just say this, as a guy that used to be a turf rider, I don't remember ever seeing a race like that, let alone ever being involved in it. It was super."

Left: Pluck in the post parade. Trainer Todd Pletcher said, "This colt's shown a lot of natural ability from day one. He's been a little bit of a playful colt that needed to get a little more professional. Even though he was winning races, he was still waiting on horses a little bit. He would sometimes veer in a little bit or veer out. You could see by the way he finished today, this was the first time he really leveled off and set sail through the lane and put it all together." 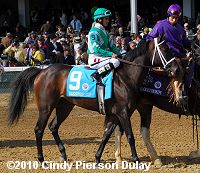 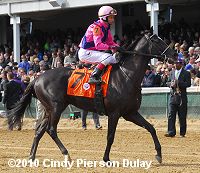 Left: Second place finisher Soldat in the post parade. Trainer Kiaran McLaughlin said, "He ran great. He had a great trip but we were second best today. Congratulations to the winner." Jockey Alan Garcia added, "I had a good trip, the perfect trip actually. I was able to save ground the whole way. I just got beat by a luckier horse."

Right: Third place finisher Willcox Inn returns after the race. Hilary Pridham, assistant to trainer Mike Stidham said, "(Willcox Inn) had a good trip but as we were just saying with Johnny (Velazquez), we wished we had been on the outside because he was a little hesitant going through holes. He's still a little green but he's going to come back better from this." 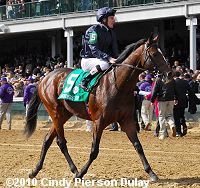 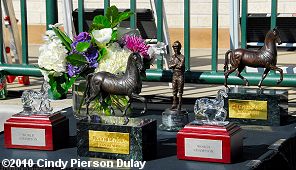 Left: Sixth place finisher and beaten favorite Master of Hounds returns after the race. The son of Kingmambo out of Sadler's Wells mare Silk and Scarlet was never in it, racing in 9th early 8 lengths off under rider John Murtagh, then putting a mild bid 4 wide to finish 6th just 3 lengths back of the winner.

Right: The trophies in waiting for the winners before the first Breeders' Cup race of the day.