The $2 million TVG Breeders' Cup Mile (G1) featured a field of 11 older horses going 1 mile around two turns of the Churchill Downs turf course. Five-year-old mare and 2008 and 2009 Mile winner Goldikova was back to try for the three-peat, and was sent off as the 6-5 favorite, exiting a win in the Prix de la Foret(G1) last out at Longchamp. In to challenge the Wertheimer et Frere homebred included 4 second choice Gio Ponti, winner of the Shadwell Mile (G1) at Keeneland and the runner-up in last year's Breeders' Cup Classic, and 5-1 third choice Sidney's Candy, winner of the La Jolla Handicap (G2) at Del Mar.

Jockey Joel Rosario sent Sidney's Candy to the front early and he set fractions of 24.02, 47.49, and 1:11.33 over the firm course while as many as 1 1/2 lengths in front of 47-1 Get Stormy and 56-1 Beethoven who contested second. Sidney's Candy continued to lead to the 1/8 pole was was tiring, while Goldikova, who was 6th down the backstretch, was just hitting her best stride. The defending champ came out wide for room and powered by Sidney's Candy at the 1/16 pole to win going away by 1 3/4 lengths over late-running Gio Ponti in 1:35.16. It was just a neck back to 22-1 The Usual Q.T. third.

Freddie Head became the first person to win the same Breeders' Cup race five times, as both a jockey and a trainer. He won in 1987 and 1988 aboard filly Miesque and in 2008-2010 training Goldikova. 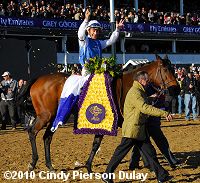 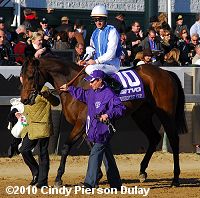 Left: Jockey Olivier Peslier celebrates as Goldikova parades with her flowers. Trainer Freddy Head said, "I think she has everything an athlete can have. I mean, she's got tremendous nerves. She's very cool. She's got great speed. She's very fast, and she can carry that speed for a long time. She can go to a mile, mile and a quarter. That's what makes her so special, and she can relax. She has always another gear. She can always change gear and finishes faster than the others. I mean, she's a real fighter. She's extraordinary."

Right: Goldikova in the post parade. Co-owner Alain Wertheimer said, "I must say one of the dreams was to beat the record, on the mile at least, and win three times in a row. That was the idea, when she won twice. I mean, when she started winning, that was really -- I think that was important to try to make history to have a horse that can win three times the same race. That would be something very, very difficult to beat. Since we've had horses for almost 100 years, that's part of the thing which was amusing." 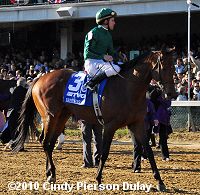 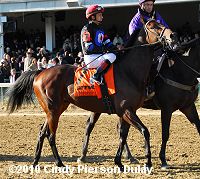 Left: Second place finisher Gio Ponti returns after the race. Jockey Ramon Dominguez said, "(Goldikova) is just a super-nice filly. We were second best. I was in the back, very happy with the way my horse was traveling. When it was time to run, our position was right behind the winner and I got outside of her, but she was just a better horse today. We ran a big race, too, but she's really a champion."

Right: Third place finisher The Usual Q.T. in the post parade. Trainer Jim Cassidy said, "Both he and (Goldikova) ran their hearts out. To get beat by Goldikova and Gio Ponti is pretty damn strong. If the stretch here hadn't been so long, I actually thought he could have won. These long stretches are killing me – here and in Canada, but my God, this could be the best grass race ever run. He's such a pleasure to be with. I'm going to take him home and I think I'll run him in a Cal-bred race. I'm going to scare the (heck) out of (them)."