The $1 million Juvenile Fillies Turf featured a full field of 14 two-year-old fillies going 1 mile around the Churchill Downs turf course. Winter Memories, undefeated in 2 starts including the Miss Grillo (G3) at Belmont, was sent off as the 11-10 favorite over 5-1 second choice Together, runner-up in the Fillies Mile (G1) at Ascot, and 7-1 third choice Kathmanblu, winner of the Jessamine Stakes at Keeneland after finishing second in the P.G. Johnson at Saratoga.

Jockey Jon Court sent 85-1 outsider Dos Lunas to the front first time past the stands and she set early fractions of 23.57, 47.58, and 1:12.38 over the firm course, while as many as 1 1/2 lengths in front of 54-1 Fancy Point stalking her in second. Entering the stretch, the pacesetters tired as 14-1 More Than Real, who raced in 5th early, came out 4 wide for room and quickly opened up a 3 1/2 length lead in mid-stretch. Winter Memories tried to close the gap but to no avail, as More Than Real cruised under the line 2 lengths in fron in 1:36.61. It was just a head back from Winter Memories to late-running Kathmanblu third. 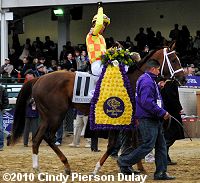 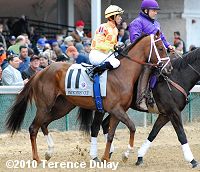 Left: More Than Real heads to the winner's circle. Winning owner and star chef Bobby Flay said, "This is obviously the biggest win I've ever had in horse racing by a magnitude of a thousand. I knew she had a shot. I knew that she was running really well. She got clear, and I was just hoping that somebody wouldn't come from behind and catch us."

Right: More Than Real in the post parade. Jockey Garrett Gomez said, "She traveled well, she left the gate good. And a couple down on the inside were able to push on forward. I would have liked to save a little more ground going into the first turn than we did. We just couldn't quite get over. We were three wide. But she shot off and traveled well behind them and outside in the clear. Didn't mind being out in the clear. You know, I squeezed her by the three and told her to move up, and she did so willingly. Then when we turned for home, I asked her to go ahead and kick in and give me what she had, and she did so and come home great for us." 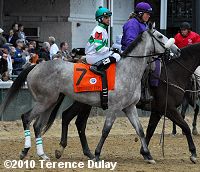 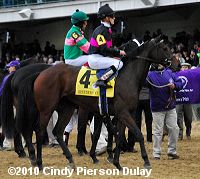 Left: Second place finisher and beaten favorite Winter Memories in the post parade. Trainer James Toner said, "When she got out, I still thought she'd get there, but I guess that was when she got bothered. But you can't take anything away from the winner. The winner won and she finished second. That's about the size of it." Jockey Jose Lezcano added, "She gave me a good race. She broke well and got good position. Coming down the stretch, (More Than Real) came over on me a little bit and I had to take up a little bit."