The $2 million Emirates Airline Filly and Mare Turf (G1) is for older fillies and mares going 1 3/8 miles around 3 turns on the Churchill Downs turf course. 2009 winner Midday was sent off as the 9-10 favorite in the field of 11 off three straight wins, in the Nassau Stakes, Yorkshire Oaks, and Prix Vermeille (all G1). In to challenge her included 5-1 second choice Harmonious, winner of the Queen Elizabeth II Challenge Cup (G1) at Keeneland last out, and 11-2 third choice Red Desire, a close third in the Flower Bowl (G1) at Belmont. 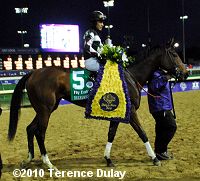 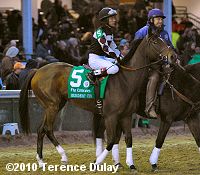 Left: Shared Account heads to the winner's circle. Trainer Graham Motion said, "I'm speechless. I'm very emotional. I love this filly. I'm not surprised she won. I'm really surprised she was overlooked (by the bettors). She only had one bad race. I'm so glad for Edgar (Prado)."

Right: Shared Account in the post parade. Jockey Edgar Prado said, "It worked out like we planned. I tried to get the filly nice and relaxed in the first part of the race. She broke so good, and I dove right into the rail and. I was able to cover her up. I was very happy where I was. I was hoping the hole would stay open until I got there, and luckily the filly was running pretty good. Once she saw the clear, she kept grinding. I think she really wanted to win today. I knew who was next to me, but I figured as long as I kept my head in front I was really happy." 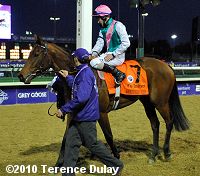 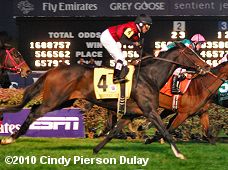 Second place finisher and beaten favorite Midday returns after the race. Jockey Tom Queally said, "No, the trip didn't beat her. The filly that finished first beat her. My filly handled the course well. That wasn't an issue either. We had a chance to get through and win, and it didn't happen. She ran her race, but got beat." Trainer Henry Cecil added, "She did nothing wrong. She ran a great race but she's had three tough races and in November she might not be quite at her best."

Right: Third place finisher Keertana runs out after the finish. Trainer Tom Proctor said, "She ran good but like my daddy always said, 'No one ever remembers who finishes second or third.' People who are happy with that are unemployed." Jockey Jose Lezcano added, "She ran a big race for me. I had a good trip and she was running hard down the stretch, but I couldn't catch the others."