A field of 12 older horses made final entry in the $1 million Breeders' Cup Dirt Mile (G1), a 1 mile trip around one turn of the main track at Churchill Downs. Here Comes Ben, winner of the Forego (G1) and Kelly's Landing, was sent off as the 5-2 favorite over 7-2 second choice Tizway, off his win in the Helso Handicap (G2) at Belmont Park. 6-1 third choice Morning Line, winner of the Pennsylvania Derby (G2), completed the top three on the tote board. 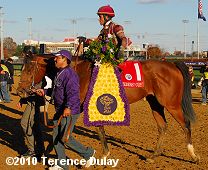 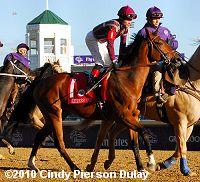 Left: Dakota Phone heads to the winner's circle. Trainer Jerry Hollendorfer said, "We always thought that, if we could get our horse in a race where there was a very fast pace, he would have a chance to close them down no matter what the distance. I was pretty much in favor of running in the Mile, and there was some question if he could do it on dirt. I have a lot of confidence in Rosario, and he's fast proving that he's going to be one of the better riders in the country. He's a young rider and very strong finisher, and that helped us today."

Right: Dakota Phone in the post parade. Jockey Joel Rosario said, "The way he runs, I knew I'd wind up going outside. When we did, I got a good run from him. He was running well when I got up to (Morning Line) and I thought I could go past him. I was 90-percent sure, and then he got him." 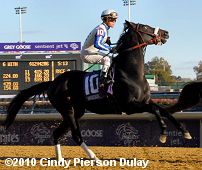 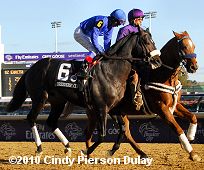 Left: Second place finisher Morning Line was quite rambunctious in the post parade. Trainer Nick Zito, asked about yet another 2nd place finish in a long line of 2nd's in stakes races this year, said, "I can't believe this. What do they say about adversity and God testing somebody? I guess I'm becoming immune to it. But it's amazing how tough this year has been. But I have to be glad the way they ran. When Morning Line was in front and Cool Coal Man (finished 4th) was running, I said, I'm going to be OK."