Kicking off the 2010 World Championships was the $500,000 Breeders' Cup Marathon (G3) on Friday. A field of 12 older horses contested this 1 3/4 mile trip around 3 turns of the main track at Churchill Downs. Giant Oak, second in the Washington Park Handicap (G3) and the Hawthorne Gold Cup (G2), was sent off as the 7-2 favorite over 5-1 second choice Prince Will I Am, off his win in the Jamaica Handicap (G1) on the turf at Belmont Park. 6-1 Bright Horizon, winner of the Irish Cesarewich Stakes at the Curragh last out, completed the top three on the board.

26-1 longshot Gabriel's Hill went to the front soon after the start, and he set slow fractions of 51.42, 1:17.44, 1:43.60, 2:09.07, and 2:34.45 while as many as 2 lengths in front of 9-1 Precision Break who stalked him in second. Favorite Giant Oak was unhurried in 11th early, 10 lengths off the pace. Entering the stretch for the last time, 11-1 Eldaafer, who stalked the pace in 4th, picked up his pace and came through between horses at the 1/8 pole, then drew off late to win by 1 3/4 lengths over Prince Will I Am in a track record time of 2:59.62. It was another 2 3/4 lengths back to pacesetter Gabriel's Hill third. The inquiry sign went up immediately after the finish, and after examining the footage of the run past the 5/16 pole on the final turn, Prince Will I Am was disqualified to 10th for veering out and bumping eventual 10th place finisher Romp, who in turn impeded eventual 4th place finisher 7-1 A.U. Miner.

In the walkway back to the tunnel, jockey Calvin Borel who rode A.U. Miner attacked Prince Will I Am's rider Javier Castellano over the incident, but they were quickly restrained and separated. The stewards later fined Borel $5000 for this action, while Castellano was fined $2500 and suspended 6 days for the riding infraction. 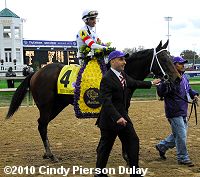 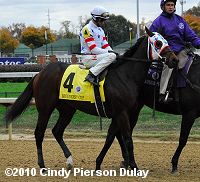 Left: Eldaafer heads to the winner's circle. Co-owner Mansour Albaroudy said, "I loved the breeding on him. I watched him the first time he ran. I couldn't believe it. I claimed him. The day that I claimed him, I said I'm going to the Breeders' Cup. They laughed at me. I went last year and that second year, and I won the Breeders' Cup."

Right: Eldaafer in the post parade. Jockey John Velazquez said, "It was perfect for me. He broke great and I was able to get good position. When the others started coming back to me at the quarter pole, I asked him for his run and he just exploded away from them." 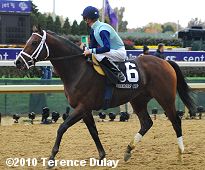 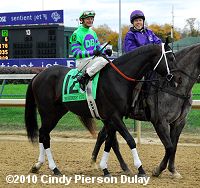 Left: Third place finisher who was moved up to second Gabriel's Hill. Jockey Julien Leparoux said, "That's how he usually runs, right to the front. He was going pretty good all the way. On the final turn I looked around and I knew he was running a big race. They just came up to me in the stretch and they were going better than we were. I never really felt like he got tired. The other ones just had a big kick." Trainer Seth Benzel added, "I'm really happy. He ran his race just like we wanted him to. He had to work early, but Julien did a great job slowing him down. It was a great ride. He was still running at the end."

Right: Fourth place finisher who was moved up to third A.U. Miner returns after the race with Calvin Borel aboard. The 7-1 shot raced abut 9 lengths off the pace most of the way around, was bumped at the 5/16 when Romp was forced out, but then re-rallied to get fourth beaten 5 1/2 lengths. 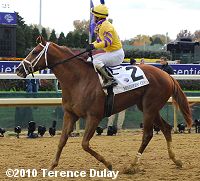 Disqualified second place finisher Prince Will I Am who was placed tenth returns after the race. Trainer Michelle Nihei said, "Despite the decision, my horse ran a very terrific race. I know that Javier said that he was looking for a place to get out, he saw a hole and asked him to go through it and Prince went through it. I didn't see anything that struck me as being anything other than normal race riding.” Jockey Javier Castellano added, "I had so much horse. I had pressure outside me. I went for a hole and they said I took his lane (Calvin Borel on A.U. Miner)."