The $2 million Grey Goose Breeders' Cup Juvenile (G1) is for 2-year-old colts and geldings going 1 1/16 miles on the main track, and is regarded as an early preview for next year's Triple Crown. With the Championships being held at Churchill Downs, this year's running holds even greater significance giving the juveniles a route race over the track they might return to on the first Saturday in May of 2011. Uncle Mo was sent off as the 7-5 favorite in the field of 10, undefeated in 2 starts, his debut at Saratoga and the Champagne (G1) at Belmont. In to challenge him included 7-2 Boys at Tosconoa, second in the Kentucky Juvenile (G3) at Churchill in his debut and then winner of a maiden at Belmont and the Hopeful (G2) at Saratoga, and 6-1 third choice Jaycito, second in the Del Mar Futurit y (G1) before winning the Norfolk (G1) at Hollywood.

57-1 longest shot Riveting Reason was loose on the lead early through fractions of 23.57 and 47.27 over the fast track, while being stalked about 2 lengths behind by Uncle Mo. Entering the stretch, jockey John Velazquez asked Uncle Mo for run and got it, as the favorite easily passed the pacesetter and drew off through the lane to a commanding 4 1/4 length win over Boys of Tosconova in 1:42.60. It was a long 6 lengths bac to 9-1 Rogue Romance third. 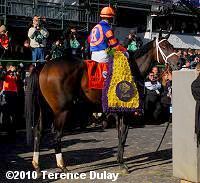 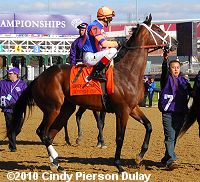 Left: Uncle Mo in the winner's circle. Owner Mike Repole said, "I've thought about this moment for 30 years, 25 years as a racing fan and 5 or 6 years as an owner, to just one day own a horse like this. So many kids growing up want to be baseball players, want to be football players, and I just wanted to own a special horse. I got into the game slow, paid my dues, claiming horses." Asked about his blue and orange silks he explained, "Growing up in Queens, I was always a huge Mets fan, blue and orange. And that '86 team, I was 16 years old, meant a lot to me. And my grandmother is 84 years old and she sees blue and orange pretty well."

Right: Uncle Mo heads out for the post parade. Jockey John Velazquez said, "The last two races, actually, when I asked him on the quarter pole to run, and he switches -- like Todd said, he kind of goes down. You see him reaching out. It's explosive. Today going into turns, you know, I wasn't sure if he was going to do the same thing like he did in the Champagne. And when he's racing and I touch him with a whip, literally he is was right there for me and picked it up like he just had to run. It was very impressive." 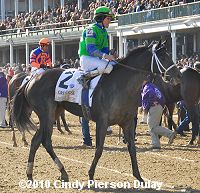 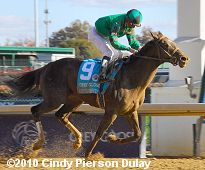 Left: Second place finisher Boys At Tosconova returns after the race. Trainer Rick Dutrow Jr. said, "Our horse ran big. I thought (Uncle Mo) was a nice horse and it looked like he had his position all the way. It looked like he was the only one that had a shot at beating us. I was hoping he wouldn't, but he did. We just have to hope that our horse stays good and keeps developing the right way."

Right: Third place finisher Rogue Romance crosses the finish line. Jockey Julien Leparoux said, "He ran very well. We had a good trip and he handled the kickback well. No problems. Those two in front (Uncle Mo and Boys At Tosconova) were just too good today." Trainer Ken McPeek added, "Our horse ran good. He showed he liked the surface, which I never doubted he would. We drew another big check, but I'd like to have a trophy one day."