The $2 million Sentient Jet Breeders' Cup Sprint (G1) featured a field of 12 older horses going 6 furlongs on the Churchill Downs main track. Girolamo, winner of the Vosburgh (G1) after finishing 5th in the Forego (G1), was sent off as the lukewarm 4-1 favorite over 5-1 second choice Big Drama, second in both the Alfred G. Vanderbilt (G1) and the Forego (G1), and 11-2 third choice Smiling Tiger, winner of the Ancient Title (G1) and Bing Crosby (G1) in California.

Jockey Eibar Coa sent Big Drama to the front exiting the chute, and he set quick fractions of 21.34 and 44.55 with 20-1 Cash Refund and 6-1 Atta Boy Roy stalking him 1 1/2 lengths behind. At the top of the lane, Big Drama began to pull away from the field, opening up a 2 1/2 length advantage over late-running 24-1 Hamazing Destiny through 5/8 in 56.42. Hamazing Destiny gradually closed the gap but had too much to make up, as Big Drama cruised under the line 1 1/2 lengths in front in 1:09.05. It was just a neck back to Smiling Tiger third, while favorite Girolamo tired badly and finished 11th. 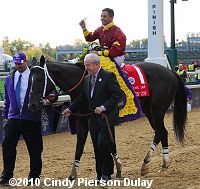 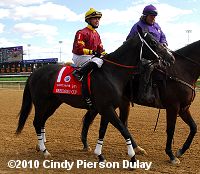 Left: Big Drama heads to the winner's circle. Trainer David Fawkes said, "I'll be honest with you. I think the foundation comes from Calder. It's safe but a tiring track. It gets horses ultra fit. You see a lot of horses come out of there and go on to win all kinds of races. Blind Luck, for example. There's a lot of horses that come out of there. Vineyard Haven. Those are just recent horses. That's a great track to get a foundation on a horse."

Right: Big Drama in the post parade. Jockey Eibar Coa said, "Our plan A was just to try to break as sharp as we can and just be off the rail if we can. So when he broke that sharp today, that I was extra happy for that. That helped out a lot. And I didn't see the speed that I thought was just going to come in the beginning next to me. So that was a big help. And I know that was a big release too. So I was able to place myself in the position that I wanted to, be off the rail in the part that we planned to be off, and everything worked out the way we wanted today." 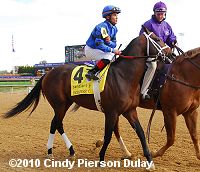 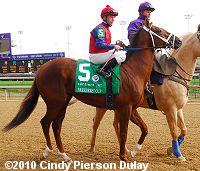 Left: Second place finisher Hamazing Destiny in the post parade. Jockey Joel Rosario said, "He broke a little slow on me; when you're going six furlongs that doesn't help. I had a good position all the way and I thought he'd kick in well for me in the stretch. He did, but the horse up front (Big Drama) kicked in too and was best today."

Right: Third place finisher Smiling Tiger in the post parade. Jockey Russell Baze said, "He wasn't really handling the track. When I really set him down, he was slipping a little bit. He slipped a little bit at the start, and as long as I was just sitting comfortable with him, he was fine, but when I started asking him to do something, the track started getting away from him. He was game right until the end. He's not a quitter, that's for sure."