The $2 million TVG Breeders' Cup Mile (G1) featured a field of 11 older horses going 1 mile around two turns of the Santa Anita turf course. Four-year-old filly and 2008 Mile winner Goldikova was back to defend her title and was sent off as the 7-5 favorite, exiting a close third place finish in the Prix de la Foret after winning the Falmouth Stakes, Prix Rothschild, and the Prix Jacques le Marois. In to challenge the Wertheimer et Frere homebred included 9-2 second choice Zacinto, second in both the Celebration Mile and the Queen Elizabeth II, and 6-1 third choice Delegator, winner of the Celebration Mile but third in the Queen Elizabeth II last out.

Jockey Ahmed Ajtebi sent 13-1 Gladiatorus to the front to set the pace and he was challenged by 9-1 Cowboy Cal to his inside and 19-1 Whatsthescript to his outside, through fractions of 22.98, 45.22, and 1:08.34. Jockey Olivier Peslier kept Goldikova back in 10th down the backstretch, some 10 lengths off the fast pace. Entering the stretch, the pace battle took its toll, setting the race up for the closers. 23-1 Courageous Cat, who stalked the pace in fifth early, came through at the top of the lane to open up a 1 1/2 length lead in mid-stretch through 7/8 in 1:20.47. However, Goldikova was gaining on the far outside, and easily passed Courageous Cat inside the 70 yard pole to win by 1/2 a length in 1:32.26 over the firm turf. It was another length back to late-running 16-1 Justenuffhumor third.

Freddie Head became the first person to win the same Breeders' Cup race twice as both a jockey and a trainer. He won in 1987 and 1988 aboard Miesque and in 2008 and 2009 training Goldikova. 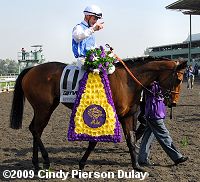 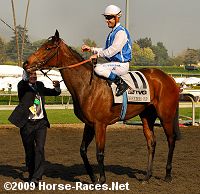 Right: Goldikova returns after the race. Trainer Freddie Head said, "The amazing thing is, she's very easy to train. She does everything herself. And coming here and winning is not more difficult than any race we run in. She's always gives her best. She has no problem. Never puts her foot wrong. She just keeps on galloping and she's happy wherever she is. So it is quite special. She's a freak, I think, really. I get much more nervous just watching than riding. I think I was much more nervous before the race than when I used to ride Miesque." 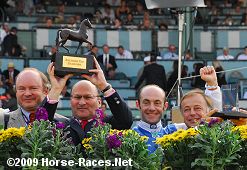 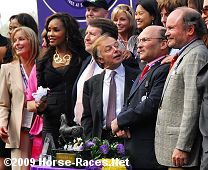 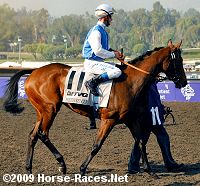 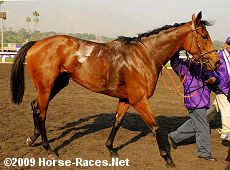 Right: Goldikova heads back to the barn after the race. Trainer Freddie Head said, “She was a little far back but the pace was strong. I was confident she would win when she came with her run into the stretch. It looked like she stopped a little, but Oliver smacked her 200 yards out for her last burst. She was a little keyed up going to the gate but quieter than usual. She's very special. It's been a long season and now to make this long trip in November. We haven't discussed her future – maybe we'll come back and try for three.” 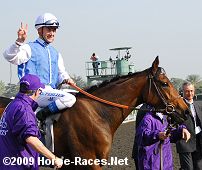 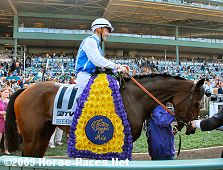 Left: Jockey Olivier Peslier holds up two fingers for each of Goldikova's wins in the Mile.

Right: Goldikova in the winner's circle. Jockey Olivier Peslier said, "The draw (post 11) wasn't a big help. I didn't want to make a run until the last turn. I came wide because that was the only place to go. She's lovely. She won last year; she won this year. I'm so glad for my owners (Wertheimer et Frere) that they have a filly like this." 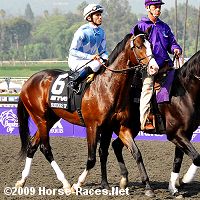 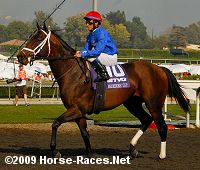 Left: Second place finisher Courageous Cat in the post parade. Jockey Garrett Gomez said, “He ran his eyeballs out. He gave me 120%. He is still real young, only a 3-year-old, and is lightly raced. I took back a little on the first turn and gave up a little position, but I wanted him to shut down a little and relax; and he did. I thought for a while I might get there first. He kept digging, but the filly was just too good.”

Right: Third place finisher Justenuffhumor returns after the race. Neal McLaughlin, assistant to trainer Kiaran McLaughlin said, “I'm really happy with him. He had a great trip. I thought there'd be an abundance of speed. We saved ground and came up the inside. No excuses. We got beat by a super filly.” Jockey Alan Garcia added, “I had a very good trip. He's an awesome horse. He ran very well. There were just two horses that ran better than us today.”