The $3 million Emirates Airline Breeders' Cup Turf (G1) is the richest turf race in North America. After Allegre was scratched, just 7 of the original field of 8 drawn went to post in this 1 1/2 mile trip over the Santa Anita turf. 2008 Turf winner Conduit was sent off as the 9-10 favorite, exiting a fourth place finish in the Prix de l'Arc de Triomphe behind Sea the Stars, after winning the King George and Queen Elizabeth II Stakes. In to challenge the Ballymacoll Stud homebred included 3-1 second choice Spanish Moon, winner of the Grand Prix de Saint Cloud and the Prix Foy, and Dar Re Mi, a 4-year-old filly taking on males, exiting a fifth place finish in the Arc after winning the Pretty Polly, Yorkshire Oaks, and Prix Vermeille.

Coming down the hill and across the main track, jockey Elvis Trujillo sent 6-1 Presious Passion to the front and as expected he sprinted to a 10 length lead through fractions of 45.14, 1:09.24, 1:34.58 and 1:59.72 over the very firm course. Spanish Moon and Dar Re Mi stalked the pace second and third respectively, while Conduit was unhurried at the back of the field for the first 3/4 mile. Entering the stretch, Presious Passion continued to lead but Conduit was quickly closing the gap on the outside. The pair hooked up inside the furlong marker, dueling to the line, with Conduit pulling ahead when it counted, getting the hard-fought win by 1/2 a length in 2:23.75. It was another 1 1/4 lengths back to Dar Re Mi third.

This was the fifth Breeders' Cup win for trainer Sir Michael Stoute. It was reported that owner Ballymacoll Farm has made an agreement to sell Conduit after his racing career is over to Big Red Farm in Japan where he would start stud duty next year. 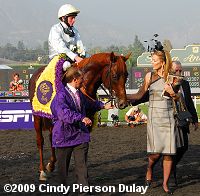 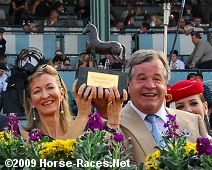 Left: Lady Weinstock of Ballymacoll Farm leads conduit to the winner's circle. She said, "It would appear to be his time of year, he feels comfortable in it and comes into his own. It was like that last year."

Right: Lady Weinstock and trainer Sir Michael Stoute celebrate with the Breeders' Cup trophy. Stoute said, "It's always a big day for the world championship. It's a very important race and it was great to see him go and do it two in a row. We're also pleased with the fourth horse Spanish Moon." 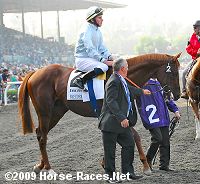 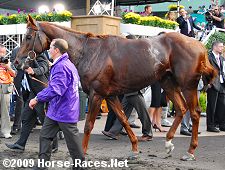 Left: Conduit walks over to the turf course before the race. His jockey Ryan Moore said, "I was stuck behind a lot of horses early but that didn't worry me. I got a nice spot down the backside and I went inside to move up. Last year went about as planned but this year wasn't according to plan. I knew I was going to get there."

Right: Conduit heads back to the barn after the race. 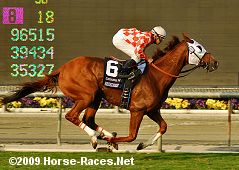 Left: Second place finisher Presious Passion flies along out front first time by. His jockey Elvis Trujillo said, "The horse didn't want to relax. The first part was a little fast. I know this horse very good. He fights. Doesn't matter how fast we go. The last quarter he'll fight everybody. It's tough to build a big lead like that and try to hold on. Even when he (Conduit) came up to me I thought I was going to win. The other horse just got past me in the last sixteenth."

Right: The horses go down the stretch for the first time with Presious Passion out front by 10 lengths, while Conduit is last over 16 lengths behind him. Presious Passion's trainer Mary Hartmann said, "I thought he ran his race. He laid it all on the line and he just got caught. He fought back. He just doesn't like to let them go by." 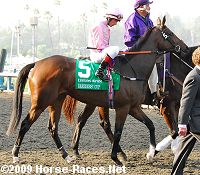 Third place finisher Dar Re Mi heads over to the turf course before the race. Her jockey Frankie Dettori said, "The race unfolded about the way I thought it would. She really ran super. Conduit beat me a length in the Arc and he beat me a length again here today, so the form is there. The owners are very pleased, so it was worth the challenge." Her trainer John Godsen added, "She ran a great race. It was a little tight from the quarter-pole but that is racing. She ran absolutely great. The first two – well you know what they are – they are fantastic horses. It was a real race. She ran great against the colts and older horses. I couldn't be more pleased."