The $2 million Sentient Jet Breeders' Cup Sprint (G1) featured a field of 9 older horses going 6 furlongs on the synthetic Pro-Ride main track. Zensational, winner of the Triple Bend, Bing Crosby and Pat O'Brien, all Grade 1 events, was sent off as the 9-5 favorite. In to challenge him included 2-1 second choice Gayego, winner of the Ancient Title last out, and 5-1 third choice Fatal Bullet, runner-up in last year's Sprint and coming off a win in the Phoenix at Keeneland.

19-1 Cost of Freedom was sent to the lead exiting the chute by jockey Tyler Baze, setting fractions of 21.88 and 44.22 down the backstretch and around the turn with Fatal Bullet chasing him a length back in second, in turn 1 1/2 lengths in front of favorite Zensational third. Entering the stretch, Cost of Freedom opened up a 1 1/2 length lead on the tiring Fatal Bullet but 25-1 Dancing in Silks and 16-1 Crown of Thorns, closed down the center of the track with Gayego also gaining on the leaders on the inside. The four horses hit the line together. The photo finish revealed that 9% supplemental entry Dancing in Silks won by a nose over Crown of Thorns in 1:08.14, who was a head in front of Cost of Freedom third, who nosed out Gayego fourth. It was another 1 1/2 lengths back to favorite Zensational fifth, officially beaten just 1 3/4 lengths. 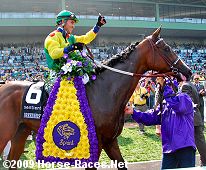 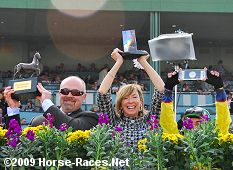 Left: Dancing In Silks in the winner's circle.

Right: The trophy presentation with owner Ken Kinakin, trainer Carla Gaines, and jockey Joel Rosario behind the flowers. Trainer Carla Gaines said, "The way Zensational had been training and Gayego won the Ancient Title, it looked like a tough situation (for us). The way the post positions set up, we were able to sit off the pace and make our run. The racing gods were smiling upon us today. Joel has ridden him in all but one race and I thought before the race, that's nice I don't have to give Joel any instructions." 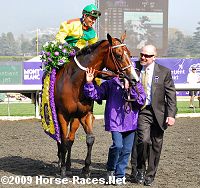 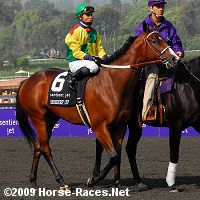 Right: Dancing In Silks in the post parade. Owner Ken Kinakin said, "He ran a great race at Cal Cup, and I just have this connection with my horses. He's trained well. He's been strong and healthy, and all I believe in someone here who is helping me to get where I am today. And I just believed in the horse. Believed in Carla's training. Believed in Joel. My grandfather bought me a pony when I was 10 years old. Neighbors had some thoroughbreds. I remember being 13 or 14, and we went to one area where there was a retired thoroughbred. And I was just a short little guy, and I looked up to see this big thoroughbred, and I thought, man, that's a beautiful animal." 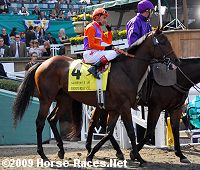 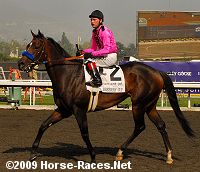 Left: Second place finisher Crown of Thorns comes out on the track before the race. Jockey Rafael Bejarano said, "I had a good clean trip; he just missed. My horse did a tremendous job. I was in perfect position following the winner. When I saw him move, I still had a lot of horse left, so I followed him, but the (Dancing in Silks) never quit. It was a close finish." Trainer Richard Mandella added, "I couldn't be more proud of my horse. He ran great. He's always made me think he's something special and he continues to make me think that."

Right: Third place finisher Cost of Freedom returns after the race. Jockey Tyler Baze said, "I'm very disappointed. I got beat by a head. He was supposed to win this year. We were supposed to run last year but we didn’t get to run." Trainer John Sadler added, "I'm thrilled. It was a race of a lifetime. He ran very well – just got beat in the last 20 yards. Gut-wrenching." 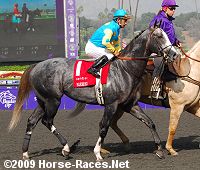 Fifth place finisher and beaten favorite Zensational in the post parade. Jockey Victor Espinoza said, "He broke a little better than usual, but he got bumped hard when we passed the gap. He tried hard, but it was just too much for him after that."