A field of 10 older horses made final entry in the $1 million Breeders' Cup Dirt Mile (G1), a 1 mile trip around two turns of the synthetic Pro-Ride surface at Santa Anita. Mastercraftsman, winner of the Diamond Stakes at Dundalk, was sent off as the 7-5 favorite over 3-1 Midshipman, winner of last year's Breeders' Cup Juvenile but with only an allowance win at Belmont since that start, and 6-1 third choice Bullsbay, winner of the Whitney then third behind Rachel Alexandra in the Woodward.

Jockey Garrett Gomez sent Midshipman to the lead first time past the stands and he set easy fractions of 23.97, 47.47 and 1:11.08 while as many as 1 1/2 lengths in front of 14-1 Neko Bay who stalked him in second. John Murtagh kept Mastercraftsman back in sixth just 4 lengths off the pace. Entering the stretch, Midshipman opened up a 1 1/2 length lead through 7/8 in 1:23.20, but 21-1 Furthest Land, who stalked the pace in fourth early, came through on the inside to pass Midshipman at the 1/16 pole and was all out to hold off late-running 24-1 Ready's Echo late to get the win by 3/4 length in 1:35.50. It was just a head back to pacesetter Midshipman third, and another 3/4 length back to favorite Mastercraftsman fourth. 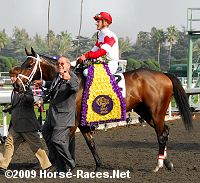 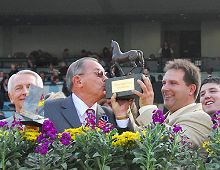 Left: Owner Ken Ramsey leads Furthest Land as he parades with his flowers.

Right: Owner Ken Ramsey and trainer Michael Maker celebrate with the trophy as Kentucky Governor Steve Beshear looks on from the left. Owner Ken Ramsey said, "I want to take my hat off to Mike, without him we certainly wouldn't have been here. He has really developed this horse from a $35,000 claimer to a Grade 1 Breeders' Cup winner. We hope to turn him into a Kelso or a Forego. We have a motto, if you're not in the dance, you have no chance. So he was in the dance." 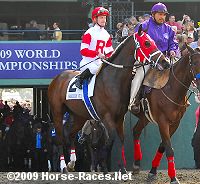 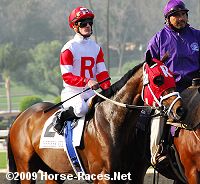 Left: Furthest Land heads out of the tunnel onto the track before the race.

Right: Furthest Land in the post parade. Jockey Julien Leparoux said, "I sat on the rail right behind the leader (Midshipman). It opened up at the quarter-pole. I found room to strike, and that was it. He always runs big on synthetics. It was not an easy win to have, but he ran big." Trainer Mike Maker added, "That was incredible. Honestly he has trained as well as he ever has. He gave me a lot of confidence and his (synthetic) record speaks for itself." 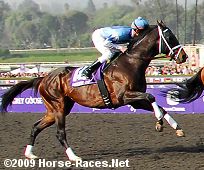 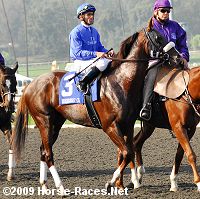 Left: Second place finisher Ready's Echo trails as they pass by the first time, where he stayed for the first 3/4 of the race. Jockey Calvin Borel said, "He ran good for me in Saratoga. I just wish we'd had a longer stretch to run in. We came a little wide and, as a matter of fact, (Mambo Meister) cost me the race; he came out to me and I had to steady. He's a nice little horse and I was happy to get back on him today. He ran a good race."

Right: Third place finisher Midshipman in the post parade. Jockey Garrett Gomez said, "I got him to take a couple breathers around the first turn and then from there I thought if it gets a little aggressive now, I snuck away with an easy enough first quarter that I should be able to play with it from there. When I quickened, he started to leave them, but inside the eighth-pole he started to level off and they just kept coming at him. He only had the one race, and for him to perform the way he did, he ran a tremendous race, he really did." 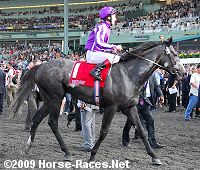 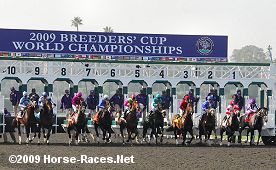 Left: Fourth place finisher and beaten favorite Mastercraftsman returns after the race. Jockey John Murtagh said, "He's a big galloping horse and he was in tight. He looked out in the straight and he wasn't really quick enough, and then the gap closed on him. We're slower than Americans out of the gate. I was following Julien Leparoux. I would have liked to have been out at the 3/8 pole, but like I said there was no place to go." Trainer Aidan O'Brien added, "He maybe just didn't get a clear run, but he ran well."

Right: The horses break from the gate for the Dirt Mile.