Kicking off Championship Saturday was the $1 million Breeders' Cup Juvenile Turf (G2) for 2-year-old colts and geldings going 1 mile around two turns of the Santa Anita turf course. Pounced, second in the Prix Lagardere Grand Criterium at Longchamp last out, was sent off as the 5-2 favorite in the full field of 12. In to challenge him included 3-1 second choice Interactif, winner of the With Anticipation at Saratoga and the Bourbon at Keeneland, and 7-2 third choice Viscount Nelson, winner of the Hurricane Run at Tipperary before running second in the Champagne at Doncaster.

Jockey Robert Landry sent 8-1 Bridgetown to the front first time past the stands and he set fractions of 23.61, 48.50, and 1:12.47 while being pressed to his outside by Interactif the whole way. Entering the stretch, Bridgetown widened his lead to 1 1/2 lengths through 7 furlongs in 1:23.70. However, Pounced, who was 5th early but just 2 lengths off the pace under new rider Frankie Dettori, came out for room and closed with a rush to nail the pacesetter late, getting the win by 3/4 length in 1:35.47. It was just a head back to Interactif third. 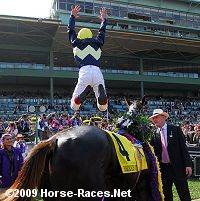 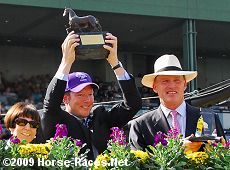 Right: Frankie Dettori does his flying dismount from Pounced in the winner's circle. Dettori said, "He came into this race quite unexposed. Only run three times. But since he's arrived, he's been doing well. All week, being inside has been a great advantage, and a great draw with 4. They jump good, they travel tremendously well inside. And then it was a matter of getting the split in the stretch. When I got the split, it took a little while to get in top gear, but it was always going to get there in the end. So it was a very straightforward trip. But it always happens when you go to a horse that can help you, and he did really help me."

Left: Owner Lady Serena Rothschild, her son Nat, and trainer John Gosden celebrate with the trophies. Nat Rothschild said, "I'm just so happy that we've won this race. And I just want to enjoy today and this week, and savor this moment. I don't think about the next step. This is a great achievement to us. I have a huge amount of gratitude to John for conceiving this, and all of the credit should go to him." 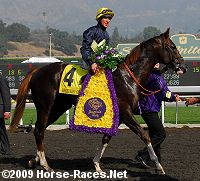 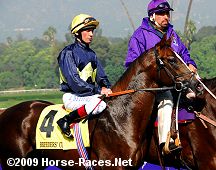 Left: Pounced parades with his flowers after the race.

Right: Pounced in the post parade. His trainer John Gosden said, "He's an equally agile athletic horse, you know. He has a high cruising speed, great acceleration. He's grown in length in the last year. Changed shape. Must have been the good grass in Kentucky when he was a baby. But he's been a pleasure to train. When he's won his maiden at Newbury back in August, I started thinking of this race. There wasn't much pace but he got through the gap when he had to. It's fantastic to win this race for the second straight year (Donativum in 2008) and to do it at Santa Anita, my second home." 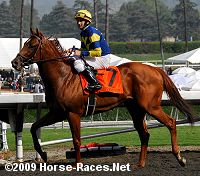 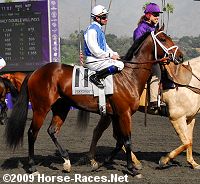 Right: Second place finisher Bridgetown returns after the race. His jockey Robert Landry said, "Kenny wanted me to put him in the race and just nurse him along as best I could. When I asked at the top of the lane, he dropped his head and really dug in. That other horse just ran past him. He ran a courageous race. He's a really good horse who is only going to get better." His trainer Ken McPeek added, "Rob rode a great race and Mr. (Eugene) Melnyk gave us a really nice horse to work with. We've just got seconditis, second in the Derby, second in the Oaks. At least I've got a Belmont, right? He's a gutsy little horse and Rob rode him to perfection. We just got beat by one really good horse."

Left: Third place finisher Interactif in the post parade. His trainer Todd Pletcher said, "In retrospect, maybe we should have put the pressure on earlier, but if we picked it up, (Bridgetown) would have picked it up too, so it probably would have been the same result. I think the post hurt us a little bit. We were pushed 4-wide into the first turn, but from post 11 we got a decent trip. We just couldn't quicken enough in the last part." Jockey Kent Desormeaux added, "We quickened so fast going into the turn that I couldn't quite compensate and that left some room for the others. I hope this horse can run on dirt because he acts like he wants to be my Derby horse."