The $12 million Emirates Airline Dubai World Cup (G1) celebrates its 26th renewal this year. Conditions were typical for late March in the Emirates, with clear skies, temperatures in the mid 80's, the main track rated fast and the turf rated "good". After Grocer Jack scratched, a field of 10 went to post with Life is Good sent off as the prohibitive 2-5 favorite of wins in the Kelso Handicap (G2), Breeders' Cup Dirt Mile (G1), and Pegasus World Cup Invitational (G1). In to challenge him included 5-1 second choice Hot Rod Charlie, second in the San Antonio (G2) before winning the Al Maktoum Challenge Round 2 (G2), and 9-1 third choice Country Grammer, second in the Saudi Cup (G1) after winning the Hollywood Gold Cup (G1).

Jockey Irad Ortiz Jr. sent favorite Life is Good to the front first time by and set the pace of 24.48, 48.03, 1:11.41, and 1:36.74 while pressed by Hot Rod Charlie and stalked by Midnight Bourbon and Country Grammer. Turning for home Life is Good continued to lead by about 2 lengths through 9f in 1:50.25 but at the 1/8 pole began to tire and bear out. Country Grammer, 3rd early under Frankie Dettori, came out wide to pass Midnight Bourbon and rallied by Life is Good at the 1/16 pole to win by 1 3/4 lengths over Hot Rod Charlie in 2:04.97. It was another 1/2 length back to late-running Chuwa Wizard third, and a head back to Life is Good fourth. Results for US wagering: 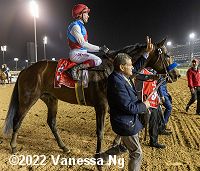 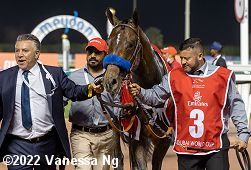 Country Grammer heads to the winner's enclosure. Winning co-owner Amr Zedan said, "I mean, I don't have any voice left after that! It was a project – we picked the horse and he has come here in the care of the best trainer in the world in Bob Baffert. Deep down in my gut I knew we had a shot. I have huge respect for all the others, especially Life Is Good who I know intimately as he used to train with Country Grammar when he was with Baffert."

Right: Country Grammer heads back to the barn with his winner's blanket. Zedan added, "This win reminds me of Medina Spirit. He was a champion and these horses are all heart. I hope Medina Spirit is reinstalled as the Kentucky Derby winner, God willing. I can't believe I'm sitting here and my silks are here! I am just very thankful to the entire team and Frankie, who gave him a perfect ride. He is one of the best, if not the best. Results speak louder than words. A trainer of that calibre is bound to produce such results. I am just dedicating this race to him." 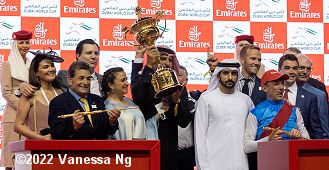 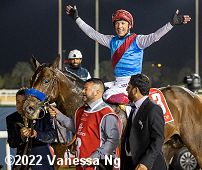 The trophy celebration. Winning jockey Frankie Dettori said, "I have equalled Jerry Bailey now (with 4 Dubai World Cups). All my other three wins came on the Nad Al Sheba track so it's nice to have a winner at Meydan. When the draw came out, I had just wanted to put him on the fence. At the half-mile, I wasn't able to keep on with the front two but in the end they came back to me. At the furlong pole, it was surreal as I knew I was going to win. It's just unbelievable. It's like a dream, to have the crowd behind me and I really believed in this horse for [co-owner Amr] Zedan and Bob and it was just great."

Right: Jockey Frankie Dettori celebrates aboard Country Grammer as they head to the winner's circle. 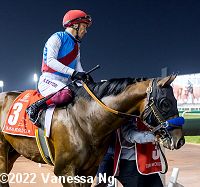 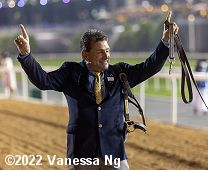 Left: Country Grammer heads out to the track before the race.

Right: Jimmy Barnes, assistant to winning trainer Bob Baffert, celebrates after the race. Barnes said, "It’s been a long trip, Frankie just rode him awesome. He couldn't have done any better. The speed worked out just as we thought it would, he put him in a close enough spot that when he called upon him, he's a true mile-and-a-quarter horse and it kicked in. I give a lot of credit to Bob Baffert for his ability to come back and perform, it's what we do, we're great off a lay-off. I'm just so excited. I was here when Arrogate won the Dubai World Cup, so this is my second with Bob and it is very, very special." 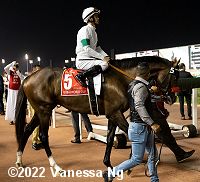 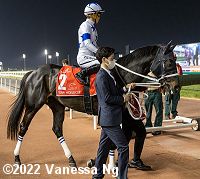 Left: Second place finisher Hot Rod Charlie heads out to the track. Trainer Doug O'Neill said, "We wanted to win of course but we're super proud and mid-race we were thinking it just wasn't Charlie's day. He then re-engaged and got up for second so it was a great night. These are one of the few times that you wish horses could talk. I think maybe blinkers might need to go back on – he broke okay but then when he got behind horses, maybe that was it. Flavien (Prat) said he took the kickback pretty well though, so we'll re-group and we'll give him plenty of time now and we'll huddle up and think of a game plan."

Right: Third place finisher Chuwa Wizard heads out to the track. Jockey Yuga Kawada said, "It was a good place. He was second last year and this year he was third so it was a very strong race and a very good run. He's matched last year's performance today and we're very happy." 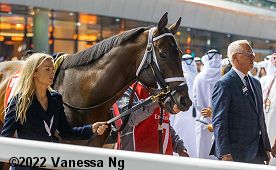 Fourth place finisher and beaten favorite Life is Good in the paddock before the race. Jockey Irad Ortiz Jr. said, "We led like we wanted. It was just the distance. The extra distance told."