There are two sprints held on Dubai World Cup night, one on the dirt and one on the turf, both at the standard 6 furlong distance. The $2 million Atlantis Dubai Golden Shaheen (G1) is the feature sprint event on the card, contested at 1200 meters (about 6 furlongs) around one turn of the main track. Breeders' Cup Sprint (G1) runner-up Dr. Schivel was sent off as the 7-5 favorite in the field of 13 off a 7th place finish n the Malibu (G1). In to challenge him included 7-2 second choice Drain the Clock, second in the Gulfstream Park Sprint, and 5-1 third choice Wondrwherecraigis, winner of the Bold Ruler Handicap (G3) and Fireplug Stakes.

Jockey Irad Ortiz Jr. sent Drain the Clock to the front and he set the pace of 23.22 and 46.09 while pressed by 35-1 Al Tariq and stalked by Wondrwherecraigis. Drain the Clock held the lead to the 3/16 pole but tired as 30-1 Switzerland swept past him coming from 6th early through 5f in 58.10. Kept to task by Tadhg O'Shea, Switzerland drew off late to win by 1 3/4 lengths over late-running Red Le Zele in 1:11.13. It was another 1/2 length back to favorite Dr. Schivel third. 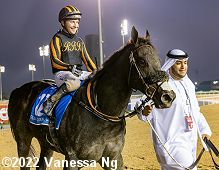 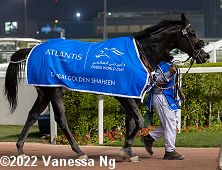 Left: Switzerland heads to the winner's enclosure. Winning trainer Bhupat Seemar said, "It's such a fantastic result. We've always really liked the horse. Tadgh and I spoke this morning and made a plan. Knew there'd be plenty of pace in the race so wanted to pick up the peices. Turning for home Tadgh said we'd just go with one kick. We'll look to bring him back next year and you never know, even at eight there could be some more improvement in him. It's a fantastic team we have behind us and I need to thank so many people, I'm in a very privileged position."

Right: Switzerland heads back to the barns after the race. 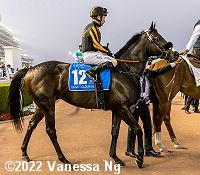 Left: The trophy presentation for the Golden Shaheen.

Right: Switzerland heads out to the track before the race. Winning jockey Tadhg O'Shea said, "There was a lot speed on and this horse excels in a truly run race. We were the outsider today and I said to Bhupat let's ride him accordingly. There's no point putting him in the race and getting him in a speed duel, so we rode him like we did in the Al Garhoud Sprint and if he shows that turn of foot he'd be competitive. Thankfully it all worked and he's a horse who grew in confidence as the race went on. They were starting to stop and flounder and he was coming harder on the bridle – so it was fantastic." 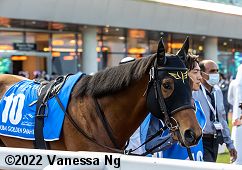 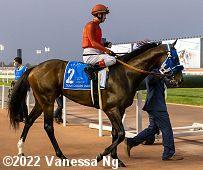 Left: Second place finisher Red Le Zele in the paddock before the race. Jockey Yuga Kawada said, "It was a good result. He likes to do his running at the back of the field in a 1200-metre race. That's just his style and he did the same here, and I had a very good feeling about him doing well going into this but there was too much ground to make up in the end. But it was a good race and I'm happy with the way he went."

Right: Third place finisher and beaten favorite Dr. Schivel heads out to the track before the race. The Mark Glatt trainee improved his record to 5 wins, 2 seconds, and 2 thirds in 10 starts, earning $1,076,500 for owners Red Baron's Barn and Rancho Temescal.

The $1.5 million Azizi Developments Al Quoz Sprint (G1) is contested at 1200 meters (about 6 furlongs) on the turf straightaway at Meydan. A full field of 16 went to post with Nad al Sheba Turf Sprint (G3) winner Man of Promise sent off as the 3-5 favorite over 5-1 second choice Creative Force, winner of the British Champions Sprint (G1), and 12-1 third choice Suesa, fifth in the Prix de l'Abbaye de Longchamp (G1).

Jockey Ryuseo Sakai sent 13-1 Entscheiden to the lead down the chute while pressed by favorite Man of Promise and stalked by 35-1 Happy Romance and 14-1 Casa Creed through an opening quarter of 23.03, as the field angled towards the stands side. At the 1/4 pole Entscheiden tired as 16-1 A Case of You and jockey Ronan Whelan gained the lead through a half in 44.98 and 5f in 56.42. Happy Romance gave chase to no avail as A Case of You held him off to win by 1 1/4 lengths in 1:08.81. It was another neck back to favorite Man of Promise third. 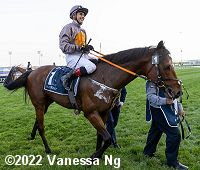 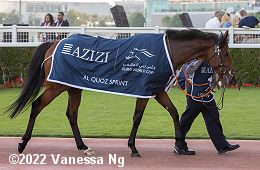 Left: A Case of You heads to the winner's enclosure. Winning trainer Ado McGuinness said, "I knew he had improved plenty from the last day. Ronan Whelan gave him a great ride, he was super cool. Ian Brennan has looked after him out here and has done a great job with him. He's a very, very good horse. We might get some credit now! People said it was a weak Abbaye he won but one thing is for sure it wasn't a weak race today. He's only four and he'll only get better. I think he'll win another Group 1 this year and the long-term target at the end of the year will be back at the Breeders' Cup."

Right: A Case of You heads back to the barn after the race. 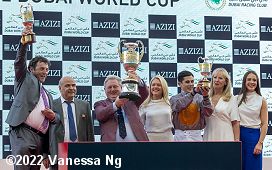 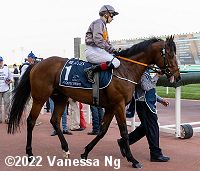 Left: The trophy presentation for the Al Quoz Sprint. Winning jockey Ronan Whelan said, "I was worried I might be getting there a bit early but he was going so well. His last furlong is always his strongest and he's such a tough and genuine horse. Five furlongs, six furlongs, soft ground, fast ground, it doesn't matter to him. I love him. He came on so much from the prep run on Super Saturday. Having that experience stood to him and he improved so much from it. It means the world to all the team. To win such a big race at Meydan, it's the stuff you dream of but don't think will happen."

Right: A Case of You heads out to the track before the race. 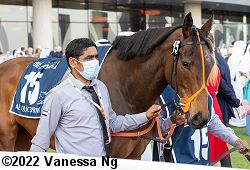 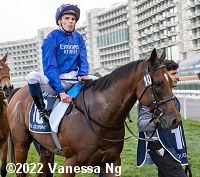 Left: Second place finisher Happy Romance in the walking ring. Trainer Richard Hannon said, "I'm delighted with that, she's run a really good race. You can't be disappointed with that, she seems to be getting better and better and she's earned us some really nice money." Jockey Sean Levey added, "She ran a blinder. I thought the draw maybe cost me a length and I think she would have been bang there with a better draw. She's run a blinder and the year is young."

Right: Third place finisher and beaten favorite Man of Promise returns after the race. Jockey William Buick said, "He ran very well, I think that's a career best really on form. I know he was really impressive last time but obviously the winner has come on for the last run but I was very happy with him all the way really." Trainer Charlie Appleby added, "I'm very pleased, he's run a solid race again. Fair play to Ado McGuinness and his team as their horse has come on again and they got the rail. We all know that's a good draw to have. Personally I think we could come back to five furlongs now with him, he's a strong traveller."