The $5 million DP World Dubai Turf (G1) is an 1800-meter (about 1 1/8 mile) trip around one turn of the turf course at Meydan Racecourse. After 2 scratches, a field of 14 older horses went to post, with Mainichi Okan (G2) winner Schnell Meister sent off as the even-money choice off a close second in the Mile Championship (G1). In to challenge him included 9-2 second choice and last year's winner Lord North, second in the Winter Derby (G3), and 9-1 third choice Mohaafeth, fourth in the Juddmonte International (G1).

Jockey Yutaka Yoshida sent Panthalassa to the lead out of the chute and he set fractions of 24,29, 47.06, 1:09.60, and 1:32.68 while pressed by 11-1 Colonel Liam and stalked by 30-1 Desert Fire. In the stretch Panthalassa continued to lead as Lord North, 8th early under Frankie Dettori, and Vin de Garde, 12th early under Mickael Barzalona, put in their late rallies. The three hit the line together in 1:45.77, just 0.25 second off the track record. After a 10 minute delay, the photo finish revealed a dead heat for win between favorite Lord North and pacesetter Panthalassa, with Vin de Garde just a nose back in third. 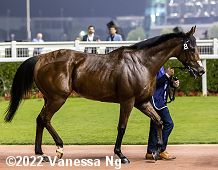 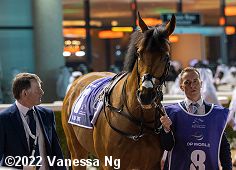 Left: Dead heat winner Lord North heads back to the barn. Winning co-trainer John Gosden said, "That's a very fair result as we got ourselves in a bit of a Japanese sandwich there and those horses are so tough. They've been buying horses for the last 30 years or so and their investment is paying dividends, they've gone and won four races now." Co-trainer Thady Gosden added, "There was obviously a very strong pace in the front. Frankie timed it beautifully which was a big relief. I have a huge team behind me and they have been able to do a really good job getting him to win almost a year after winning this race last year. Huge credit to the horse as well. The Prince Of Wales’s [at Royal Ascot] will be his target but we need to see how he comes out of this race."

Right: Lord North in the walking ring before the race. Winning jockey Frankie Dettori said, "I thought I was beaten on the line. He had half the year off, he almost died last year so to get him back to performing at this level, it is a great credit to the team. He gave me everything he had so I can't ask for anything more. What an amazing achievement by everyone and this horse, he's just a fighter. Very few horses can do what he's done and come back to win the Dubai Turf for the second time. What a horse." 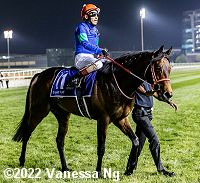 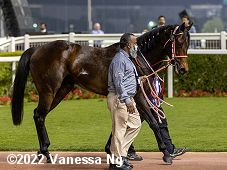 Left: Dead heat winner Panthalassa heads to the winner's enclosure. Winning trainer Yoshito Yahagi said, "Usually when he runs he takes the lead and really runs off with the race. We thought he was going to go a little bit further out wide than he did but he really held on until the end. He’s always been a really good starter so we weren’t too worried about the draw. We’ve had a lot of good luck today so we didn’t think we’d lose! I’ve never known a wait like that in a photo finish." 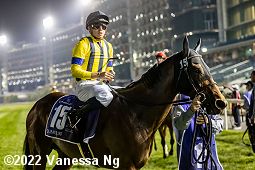 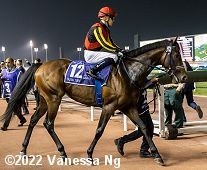 Left: Third place finisher Vin de Garde returns after the race. Jockey Mickael Barzalona said, "My horse ran a very good race, but he didn't have the luck in the end. We were unlucky."

Right: Eighth place finisher and beaten favorite Schnell Meister heads out to the track before the race. Jockey Christophe Lemaire said, "I had a good trip in the middle. He didn’t finish like I expected. He is better than that."