The $6 million Longines Dubai Sheema Classic (G1) is the last of four scheduled turf races held on Dubai World Cup night. A field of 15 older horses went 2410 meters (about 1 1/2 miles), one complete circuit of the expansive turf oval at Meydan Racecourse in Dubai. Breeders' Cup Turf (G1) winner Yibir was sent off as the lukewarm 3-1 favorite. In to challenge him included 9-2 second choice Glory Vase, two-time winner of the Hong Kong Vase (G1), and 5-1 third choice Authority, winner of the Neom Turf Cup (G3) after finishing second in the Japan Cup (G1).

Jockey Christophe Lemaire sent Authority to the front first time by to set the pace while pressed by 7-1 Shahryar and stalked by 10-1 Pyledriver and 90-1 longest shot For The Top. Authority continued to lead into the stretch, but Shahryar under Cristian Demuro took over at the 1/16 pole. Favorite Yibir, last early under William Buick, came out wide for room and unleashed a strong late rally but Shahryar held him off to win by a neck in 2:26.88, just 0.23 second off the course record. It was another 1/2 length back to pacesetter Authority third. 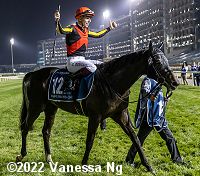 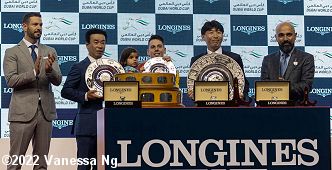 Left: Shahryar heads to the winner's enclosure. The win was the fifth (including a dead heat in the Dubai Turf) for Japanese-trained horses on Dubai World Cup night. Winning trainer Hideaki Fujiwara said, "It's very normal for him to get on his toes before he races so I wasn't too concerned and I had full faith in Cristian to handle the horse and take care of him during the race. It would be a dream for me to take this horse to the Prix de l'Arc de Triomphe. It is the race we want to win and it would mean so much to be able to take him there. That is our ambition and our aim. It has been a great night for Japan and a great night for our stable with a first and a third. I am so proud of our horses." 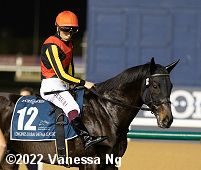 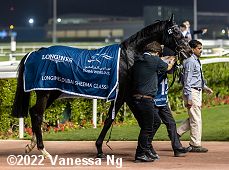 Left: Shahryar heads to the track before the race. Winning jockey Cristian Demuro said, "Before the race I knew I wanted to be behind Authority as I knew he would lead. We were able to get a nice position just behind him on the rail and when I pulled my horse out in the straight I knew he was going to win. For a moment he was a little lost in front, but we felt Yibir coming and I always believed we were going to get there.  It is amazing to win a race like this. Amazing also to win on a Japanese horse. They are showing they are the best in the world." 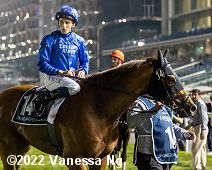 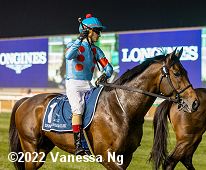 Left: Second place finisher and beaten favorite Yibir returns after the race. Trainer Charlie Appleby said, "He’s learning, so hopefully in time we can ride a bit more of a race on him. You saw the class of the horse in the way he finished. It was like a replay of the Breeders’ Cup where we needed an extra stride. I think we’ll stick to our plan and head for the Man O’ War (at Belmont)."

The horses break from the gate for the Sheema Classic.

The $1 million Al Tayer Motors Dubai Gold Cup (G2) is the longest race on World Cup night, contested at 3200 meters (about 2 miles) on the turf. Manobo was sent off as the 1-5 favorite in the field of 13 off wins in the Prix Chaudenay (G2) and the Nad al Sheba Trophy (G3). In to challenge him included 6-1 second choice Stay Foolish, winner of the Red Sea Turf Handicap (G3), and 13-1 third choice Baron Samedi, fourth in the Red Sea Turf Handicap.

Jockey Louis Steward sent 60-1 Volcanic Sky to the lead first time by to set the pace for the first lap while pressed by 15-1 Veloce Oro and stalked by 100-1 longest shot Castlebar and Stay Foolish through fractions of 50.07, 1:42.79, 2:31.53, and 2:54.74. On the far turn, Volcanic Sky continued to lead but was tiring as favorite Manobo, 7th early under William Buick, moved up to challenge, gaining a short lead at the 1/8 pole with Stay Foolish giving chase. The pair dueled in a sprint for the final furlong as Stay Foolish under Christophe Lemaire outfinished Manobo in the final strides to win by 1/2 a length in 3:19.64. It was another 2 lengths back to late-running 35-1 Al Madhar third. 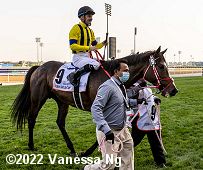 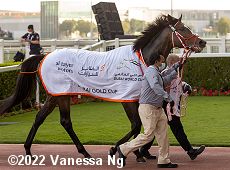 Left: Stay Foolish heads to the winner's enclosure. Winning trainer Yoshito Yahagi said, "After Saudi he enjoyed the atmosphere in Dubai, he was excellent, very comfortable here. He loves Dubai I think. I did not give any orders to the jockey. Christophe Lemaire knows what to do. I am not sure what we do with him next. We will go back to Japan but my dream would be to go to Royal Ascot for the Gold Cup but I would need to speak with the owner first."

Right: Stay Foolish with his new winner's blanket. Winning jockey Christophe Lemaire said, "He didn’t jump out as fast as he did in Saudi Arabia but he travelled well. I was not worried about finding a gap in the straight because the horse in front of me was travelling well. When I saw Manobo come alongside me powerfully, I thought we were done. Stay Foolish doesn’t have a big turn of foot but when the Godolphin horse struggled close to the finish my horse got a lot of confidence and moved forward again. Obviously Manobo was the one to beat and he also had a 2kg advantage." 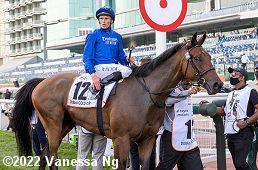 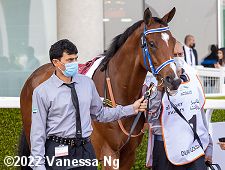 Left: Second place finisher and beaten favorite Manobo returns after the race. Trainer Charlie Appleby said, "Stepping up from a mile and a half I had it in the back of my mind that it could be the end of the Richter Scale, but considering what he did in the first half of the race he did well to run as well as he did."

Right: Third place finisher Al Madhar in the walking ring before the race. the Musabbeh Al Mheiri trainee improved his record to 4 wins, 0 seconds, and 1 third in 17 starts, earning $164,156 for owner Tawfik A Saeid Ali.