At Happy Valley Racecourse in Hong Kong on Wednesday night, Zac Purton won this year's edition of the Longines International Jockeys' Championship, with his 2 wins and 24 total points in the 4 race competition, taking home the winner's share of the HK$800,000 (US$102,390) purse, giving his first win in the competition before the 29,294 fans in attendance. Jockeys were awarded 12 points for a win, 6 points for second, and 4 for third, and competed in four races, three carded at 1650 meters (just over a mile) and one (the second leg) at 1000 meters (about 5 furlongs) around the tight right-handed 7 furlong triangular turf course on Hong Kong Island. Silvestre de Sousa finished second with 18 points, Pierre-Charles Boudot was third with 16 and defending champion Hugh Bowman was fourth with 12. American representative Flavien Prat was fifth with 6 points.

In the first leg, Purton sat 6th early aboard 8-1 Our Hero then rallied late to win by a head over Silvestre de Sousa aboard 9-1 See Me Now, with Ryan Moore and 7-2 favorite Forever Posh third. In the second leg, 11-2 Fish N Chips with Joao Moreira was quickest away but Silvestre de Sousa and 3-1 favorite Peace Combination took over at the top of the lane to win by a length over 6-1 Dr. Proactive and Hugh Bowman second, with 7-2 Exceptional Desire with Pierre-Charles Boudot third. Purton was 5th aboard 26-1 longshot Cour Valant. In the third leg, Hugh Bowman sent 13-1 Sparkling Sword to the lead but Purton aboard 6-1 Let's Take It Easy rallied from 6th to win by 1 1/4 length. In the final leg, Purton sent 31-1 longshot Lotus Breeze to the lead but he tired in the stretch to finish 11th, as Pierre-Charles Boudot aboard 7-2 Bank On Red prevailed by a neck over Flavien Prat aboard 14-1 Imperial Gallantry, handing the victory to Purton as Silvestre de Sousa, 9th aboard 14-1 Mighty Maverick, needed to win in order to tie Purton's point total.

Bowman said after the first leg, "I had a beautiful run. Danny (Shum, trainer) said he was in the groove today." Shum added, "I don't know why Zac told everyone the horse couldn't win. I told him he had improved a lot since his last run and I gave him a good chance." After the second leg, winner Silvestre de Sousa said, "We went a good gallop, and I was able to get a breather into him around the bend. I filled him up again in the straight and he ran on. Caspar (Fownes, trainer) told me he was in as good a shape as he could get him." Fownes added, "I was really pleased to get Silvestre for this horse because he's experienced at Happy Valley, he's an aggressive rider and as we know Peace Combination is a fast horse who has been going well and just needed a draw, which he got tonight." After the third leg, Purton said, "He's been racing well and it was a good move by Peter (Ho, trainer) to bring him back to the Valley. He was my best chance on the night and he's got the job done." Ho added, "I'm just lucky, you can't really plan to win one of these every year. Zac gave him a good ride, he's been racing consistently, that was it." So going into the final, Purton had 24 points, Sousa 18, and Bowman 12. Pierre-Charles Boudot said after the fourth leg, "I thought it would be really important to win a race tonight with a view to my stint here in January and February. Mr. (trainer John) Size gave me orders to the millimeter and the race worked out exactly as he predicted. To finish on the podium in the Championship is the cherry on the cake." Boudot starts a short term contract to ride in Hong Kong in January.

After nailing down his first International Jockeys' Championship and his HK$500,000 (US$63,993) check, Purton said, "I came into tonight thinking that I had quite ordinary rides, but it turned out well, and I'm pleased to have won, as I've gone close a couple of times. I didn't want it to be another déjŕ vu. You need a lot of luck, and I got it in two races! There was that one year where I thought I had decent rides and I was in front with one hand on the trophy before I got tipped over on the line. I haven't had good rides in one since, even the other year I ran second, and coming here tonight I didn't think I had the rides to do it either. I knew Let's Take It Easy would give me a good ride but the rest I didn't fancy at all so it's a surprise to get two winners. I feel like the series owed me one since the night Joao pipped me, so I suppose we're all square now." 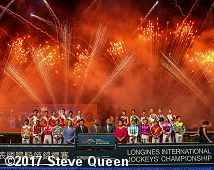 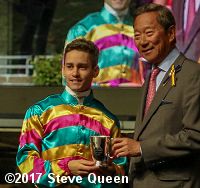 Left: The opening ceremony firewords for the Jockey Championship. A record HK$1.308 billion (US$167.406 million) was bet on the 9 race card.
Right: Flavian Prat, the only American representative, at the opening ceremonies. He finished 5th overall.