The shortest of the International Races at Sha Tin is the HK$18.5 million (US$2.4 million) Longines Hong Kong Sprint (G1) at 1200 meters, the richest 6 furlong turf sprint in the world, and the final leg of the Global Sprint Challenge. Mr Stunning was sent off as the 9-10 choice in the field of 13 off his wins in the Premier Bowl (G2) and the Jockey Club Sprint (G2), the main local preps for this race. In to challenge him included 5-2 second choice Lucky Bubbles, last year's runner-up but 9th in the Jockey Club Sprint last out, and 7-1 third choice Thewizardofoz, winner of the Premier Cup (G3) but 5th in the Jockey Club Sprint. Breeders' Cup Turf Sprint (G1) winner Stormy Liberal was dismissed by bettors at odds of 83-1.

Jockey Matthew Chadwick sent 22-1 Peniaphobia to the lead and he set fractions of 23.37 and 45.46 while pressed by Mr Stunning and stalked by 20-1 Once in a Moon. Entering the lane, Peniaphobia tired as Nash Rawiller aboard Mr Stunning easily took over the lead. 20-1 D B Pin, 7th early under Olivier Doleuze, put in a strong late rally but Mr Stunning held him off for the win by a neck in 1:08.40. It was another 1 3/4 lengths back to 44-1 Blizzard third, while Stormy Liberal checked in 11th beaten 11 lengths. 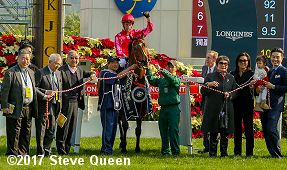 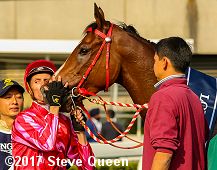 Left: Mr Stunning in the winner's circle. Winning trainer John Size, who is the first trainer to complete the exacta in a Hong Kong International Race said, "He's had a lovely lead-up into the race. His three runs were very good. He's trained well and trialled well all the way through to today. He's had every opportunity, he drew a good gate, he had a perfect run and Nash put him in a beautiful position so it was hard to see him being beaten from there. I'm not sure he's got the constitution to travel, I'm not sure if he's that tough. At home though, if he's looked after in Hong Kong, he'll keep racing well."

Right: Mr Stunning gets a kiss from jockey Nash Rawiller after the race. 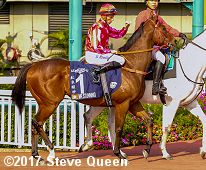 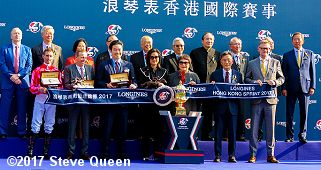 Left: Mr Stunning heads out for the post parade before the race. Winning jockey Nash Rawiller said, "I had no intention of going near the rail at any stage. It can change pretty quickly in a race like that, you only need them to steady a little bit and next minute, you're in the worst spot in the race. Although it looks pretty going down the hill, it can end up being the biggest trap of all time. So I sat one-off, I was in a beautiful position with a bit of cover. The horse was in a lovely rhythm. Theyng about the racing gods the other day – well, this was in the hands of the racing gods, definitely."

Right: All the connections and officials pose with the trophy and winner's banner after the trophy presentation for the Hong Kong Sprint. Rawiller added, "I was fortunate enough to ride a Macau Derby winner but I haven't had an international G1 win here, so it's great to finally get one. I'm thrilled. I have to thank my family, they are everything to me and they have been my biggest supporters." 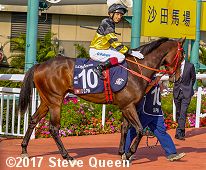 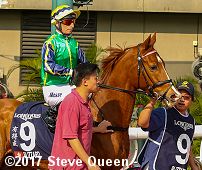 Left: Second place finisher D B Pin heads out for the post parade before the race. Jockey Olivier Doleuze said, "I am sad but happy. I was very confident. Last time I could not really test him but today he has run against an impressive horse and run a great race. He gave me everything , but the winner just held on. Mine has a future and I hope he might go to Dubai next year." Trainer John Size added, "To D B Pin's credit, though, he's probably covered a lot of extra ground from the gate and he's made him work for it. Both horses have run very well."

Right: Third place finisher Blizzard heads out for the post parade before the race. Jockey Gerald Mosse said, "He ran very well, I'm very pleased with him. He's a lovely horse and he tries, he gives everything. He's coming on now, he's getting stronger and stronger. He hit the line well but was beaten by two superstars."0