The co-feature on Saturday at Parx Racing near Philadelphia was the $1 million Pennsylvania Derby (G1) for 3-year-olds going 1 1/8 miles on the main track, its first time being run as a Grade 1. It was unusually warm for the first weekend of autumn, with sunny skies and temperatures in the high 80's, with the main track fast and the turf firm. West Coast was sent of as the 9-10 favorite in the field of 10., winner of 4 straight including the Easy Goer, Los Alamitos Derby (G3), and Travers (G1). In to challenge him included 7-2 second choice Irap, 3rd in the Travers after winnng both the Ohio Derby (G3) and Indiana Derby (G3), and 5-1 third choice Timeline, 5th in the Haskell (G1) last out.

Jockey John Velazquez sent 18-1 Outplay to the front first time by through an opening quarter in 23.20 while pressed by West Coast and stalked by 19-1 Game Over. Down the backstretch West Coast continued to press the pace gaining a short lead through a half in 47.24 with Outplay retaking the lead on the far turn through 3/4 in 1:11.18. Entering the lane, Outplay tired as jockey Mike Smith asked West Coast to draw clear. The favorite opened up a 4 length lead in midstretch through 1 mile in 1:36.79. Irap, 6th early under Mario Gutierrez, came out 5 wide for the drive and rallied well to no avail as West Coast cruised to a 7 1/4 length win in 1:49.91. It was another length back to 47-1 Giuseppe the Great third. During the runout Irap was pulled up and vanned off, having suffered a fracture in his left front sesamoid. There was a brief inquiry into the stretch run due to Irap lugging in on eventual 8th place finisher 6-1 Irish War Cry but the result stood.

Also on the card was the Cotillion Stakes (G1) won by It Tiz Well. 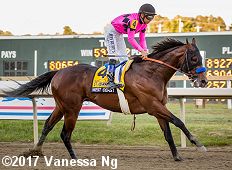 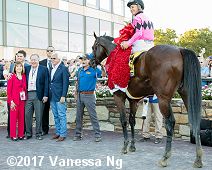 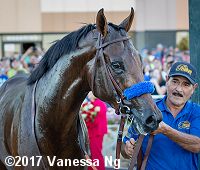 Left: West Coast in the winner's circle. Winning trainer Bob Baffert said, "This horse is just getting better and better. We thought he would run a big race, and he was calm in the paddock. He is just a big boy. It was nice the way he ran. He did it pretty easily. I felt real good on the first turn. Mike had him in a good position kept him on the outside. I told him don't go near the rail. At the 3/8ths pole he had a lot of horse and I was afraid he was going to get a little bored out there."

Right: West Coast heads back to the barn after the race. Winning jockey Mike Smith said, "He was a little aggressive early because I asked him so aggressively out of there. He ran really well today. He's turned into a really good horse. He's just better than they are. As a matter of fact, he was getting bored." 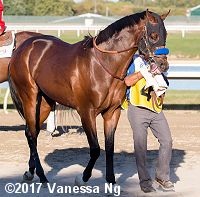 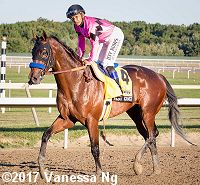 Left: West Coast heads to the paddock before the race.

Right: West Coast returns after the race. Baffert added, "The Travers was pretty impressive and he was awful good today. To have a 3-year-old at this time of year and the way he won the Travers and now this race, he is going to be a horse to reckon with. I know he's late to the party. It just took him time to get to this level. The Breeders' Cup is a long ways off, we'll wait and see. We'll just get him back to Santa Anita and see how's he's doing. Mr. (owner Gary) West wants to run him next year at 4." 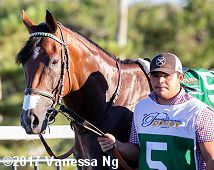 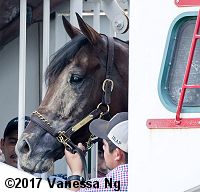 Second place finisher Irap in the paddock and in the ambulance after his injury. Trainer Doug O'Neill said, "Irap was resting comfortably in his stall and has an appointment Monday morning at the New Bolton Center with Dr. Dean Richardson to surgically repair his left front sesamoids. Prognosis is good." AAEP veterinarian Celeste Kunz had announced, "Irap was diagnosed with a left front sesamoid fracture. He was stablilized on the track and vanned back to his barn. They stabilized the ankle with a splint, this is a very serious injury." 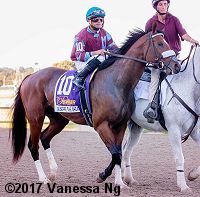 Left: Third place finisher Guiseppe the Great in the post parade. The Nick Zito trainee improved his record to 1 win, 3 seconds, and 2 thirds in 8 starts, earning $431,500 for owner Mossarosa.

Right: The horses break from the gate for the Pennsylvania Derby.

The first of three graded stakes on Saturday was the $300,000 Gallant Bob Stakes (G3) for 3-year-olds sprinting 6 furlongs on the main track. The two-horse entry of allowance winner Petrov and Amsterdam (G2) winner Coal Front was sent off as the 4-5 favorite in the field of 10 (9 betting interests). In to challenge them included 5-2 second choice allowance winner American Pastime and 13-2 third choice Excitations, 2nd in the Amsterdam.

Jockey John Velazquez sent Coal Front to the lead exiting the chute through fractions of 22.21 and 45.21 while pressed by American Pastime and stalked by 45-1 Aquamarine. Coal Front and American Pastime dueled the length of the stretch through 5f in 57.07, but Coal Front pulled away late to win by 1/2 a length in 1:08.94. It was a long 5 1/2 lengths back to Petrov third. 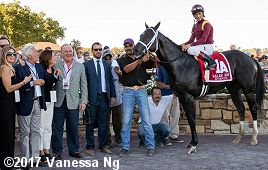 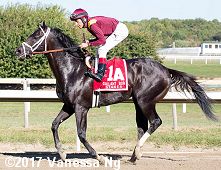 Left: Coal Front in the winner's circle. Winning jockey John Velazquez said, "At the quarter pole, I didn't know. His ears went up, and I and said, 'Let's go, guy.' Then he really dug in."

Right: Coal Front returns after the race. Unfortunately he suffered a condylar fracture which was discovered after he returned to the barn. Trainer Todd Pletcher said, “I thought he ran well, unfortunately he came out of it with a condylar fracture in his right front. He'll have surgery tomorrow. We're optimistic he can come back well from it. Obviously, we'll know more after the surgery.” 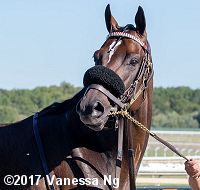 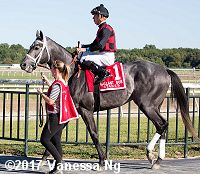 Left: Second place finisher American Pastime in the paddock before the race. The Bob Hess Jr. trainee improved his record to 3 wins, 2 seconds, and 0 thirds in 6 starts, earning $180,100 for owners Mike Mowrey and Gary Woods.