The last Grade 1 races of the Canadian racing season were run at Woodbine on Sunday, highlighted by the 81st renewal of the $800,000 Pattison Canadian International (G1), featuring top older horses going 1 1/2 miles, 1 complete lap of the E.P. Taylor Turf Course. Due to overnight rains, the course was officially rated good, but with a 9.9 GoingStick reading, would be called "good-to-firm" in Europe. Conditions were typical for mid October in Toronto, with mostly cloudy skies and temperatures in the high 40's.

Thundering Blue was sent off as the lukewarm 3-1 favorite in the field of 11 off his win in the Stockholm Cup International (G3) at Bro Park after finishing 3rd in the Juddmonte International (G1) at York. In to challenge him included 4-1 second choice Focus Group, winner of the John's Call at Saratoga, and 11-2 third choice Spring Quality, winner of the Manhattan (G1) but 3rd in the Sword Dancer (G1) and 7th in the Joe Hirsch Turf Classic (G1). 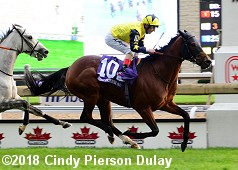 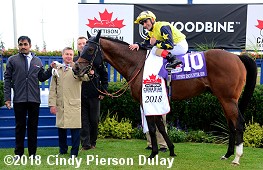 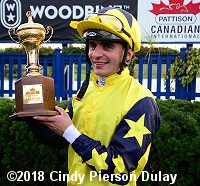 Left: Desert Encounter in the winner's circle. Winning jockey Andrea Atzeni, celebrating his first Canadian International win in his 4th try said, "He travelled good into the race and I followed the favourite all the way through, Thundering Blue. I thought he was the one to beat and he's a horse that's got such a high cruising speed and then when he saw me, he actually got a very good turn of foot as well. You can't get to the front too soon because once he gets to the front, he thinks he's had enough, but he's a horse that has a lot of ability and it's great for the team at home, great for David and the owner and everybody involved." 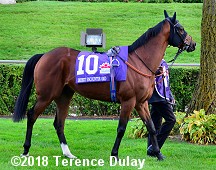 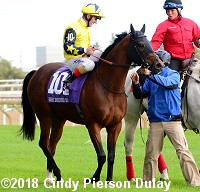 Left: Desert Encounter in the paddock before the race.

Right: Desert Encounter behind the starting gate. Philip Robinson, racing manager for owner Abdulla Al Mansoori added, "(Trainer) David Simcock has been here on a few occasions. He loves it. I think he's had this race in mind for a long time for this horse. He said that this is the race for him. And he set out his program throughout the whole season to (prepare) him to come here. It worked out. He got it dead right." 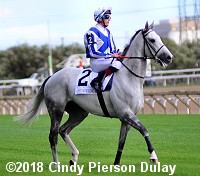 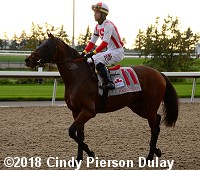 Left: Second place finisher and beaten favorite Thundering Blue behind the starting gate before the race. Jockey Fran Berry said, "It didn't go quite as quickly as I had envisioned through the first two turns. It was quite steadily run until we turned to the backstretch, then the race got going, but I was always comfortable. I knew I had a good bit of horse and I was prepared to stay in and ride the rail until we got into the stretch. When I picked it up, we got a perfect split right at the right time. That's when I said, 'It's game over, I'm going to win here,' but I couldn't believe Desert Encounter joined us as quickly as he did and then went by us."

The field breaks from the starting gate for the 81st running of the Pattison Canadian International.