The highlight of the Gulfstream Park meeting is the $1 million Besilu Stables Florida Derby (G1), a major prep for the Kentucky Derby. A field of 9 three-year-olds contested this 1 1/8 mile trip on Saturday afternoon with 100 "Kentucky Derby Championship Series" points to the winner. Fountain of Youth (G2) and Holy Bull (G2) winner Upstart was sent off as the even-money favorite over 9-5 Materiality, winner of the Islamorad Handicsp and 5-1 Itsaknockout, winner of the Fountain of Youth (G2). 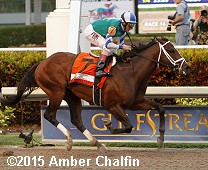 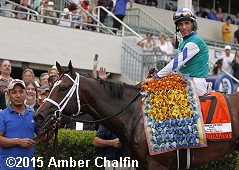 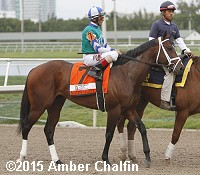 Left: Materiality in the winners circle. Winning trainer Todd Pletcher said, "It shaped up the way Johnny (Velazquez) and I talked about after the previous race (Islamorada Stakes). We thought about the way it might set up, that the 2 (Jack Tripp) might show some speed, Materiality might be laying in a stalking-type position. We felt that Upstart would probably have us as his primary target, and all of that unfolded exactly like we talked about."

Right: Materiality in the post parade. Winning jockey John Velazquez said, "We got very close (to Upstart), that's for sure. We got out a little bit further than I thought I did. I had my head down, looking over to make sure I didn't bump him. There was a little brushing, maybe, but there was no contact. I was very conscious to pull back in and you can see the two horses spread apart. He felt strong the whole way around. The way he came back like Todd said from 22 days ago…we hooked up at the half-mile pole--that's a lot of running." 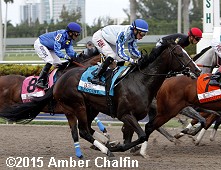 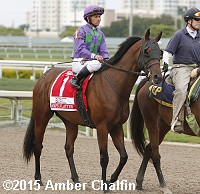 Left: Second place finisher and beaten favorite Upstart shortly after the start of the race. His trainer Rick Violette Jr. said, "I don't want to hear from the guys that say, ‘Don't worry about the nine hole,' because it made all the difference. If we had (Materiality) on our hip the whole way, maybe the result would have been different. (Materiality) beat us fair and square. He is obviously a very nice horse, he comes off a really fast race and didn't regress."

Right: Third place finisher Ami's Flatter in the post parade. His jockey Javier Castellano said, "He did really well today. I'm very proud of this horse. I know those two horses Upstart and Materiality were the two best horses in the race. They sprinted off and it was hard to catch up. Today he came from behind, kind of the same pace. I'm very proud of the way he did it. I think he was just third best today. I'm very satisfied the way he did it." 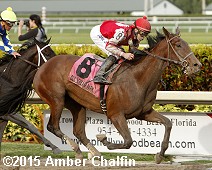 The distaff counterpart to the Florida Derby is the $300,000 Gulfstream Oaks (G2) also run at 1 1/8 miles, worth 100 points to the winner in the Kentucky Oaks Championship Series. Birdatthewire was sent off as the 8-5 favorite in the field of 8 over 5-2 Eskenformoney and 3-1 Ekati's Phaeton. 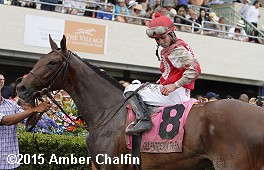 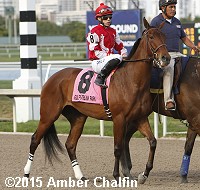 Left: Birdatthewire in the winner s circle. Winning trainer Dale Romans said, "I was worried down the backside. It looked like he lost his irons. He was standing up trying to pull her up. He said she was just getting so rank with him and wanted to go. That was really impressive. This is a special filly. She's just gotten better and better as she's been in training. I couldn't ask any more of her."

Right: Birdatthewire in the post parade. Winning jockey Irad Ortiz, Jr. said, "She got very strong from the first turn to the backside. She's been running sprints, seven-eighths, a mile, but still she was sharp. She was so strong on the backside, I was trying to get her to relax, because she comes from behind--that's her race. I tried to do my best to wait; she was pulling, but when I asked her to run, she took off. She was ready. I wasn't sure she would have energy for the end, but she was. Not too many horses do that. She was much the best today. Thanks to the trainer (Dale Romans) and the owner (Forum Racing) for letting me ride the filly back today." 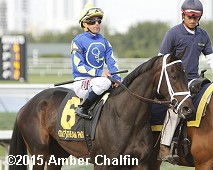 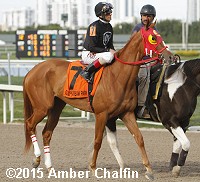 Left: Second place finisher Eskenformoney in the post parade. Her trainer Todd Pletcher said, "She ran well and was second-best on the day. She was right where I wanted her to be, right up until she got passed by the final horse."

Right: Third place finisher Danessa Deluxe in the post parade. Her jockey John Velazquez said, "It was a good trip. She got out a little bit at the quarter pole. I thought I had a chance to win it." Her trainer Jorge Navarro said, "She ran huge. When she came into my barn they told me how nice she was, so I worked her and I was like, ‘Whoa. This filly can run.' She's going to be all right. Even (jockey) Johnny (Velazquez) said if she had had one more work, she would have won the race." 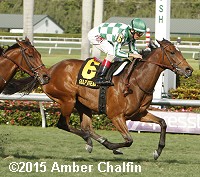 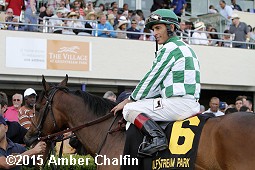 Winning trainer Christophe Clement said, "I'm delighted. She won for owner-breeder Joe Allen. He's a great man, very successful. He was involved in the past with a horse called War Front. He brought the filly back from France. She had trained well. I had a small question mark if she would stay the distance, but Moon Queen won The Very One for us several years ago, and I guess the daughter is as good as the dam. Life is good."

Jockey John Velazquez added, "It worked out pretty good, the only thing was she didn't break really good. We thought she'd be pretty sharp out of there. We had to hold her for a long time. She really kicked in. Christophe (Clement) said she might get to waiting a little bit (once in front) and she did. But she had enough to fight on." 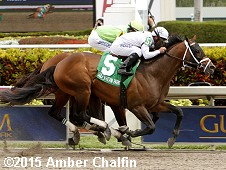 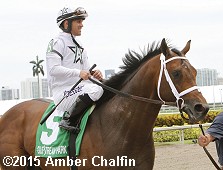 Winning trainer Todd Pletcher said, "We knew Sr. Quisqueyano is a tough horse to get by. Javier (Castellano) gave him a good ride. This horse has been knocking on the door for a while. We're happy to get a graded stakes with him, so that he could have a spot in the WinStar stallion barn. These A.P. Indys, we know they just get better with age. We'll probably point to the Brooklyn (at Belmont on June 6), the only question is whether we run before that or not."

Jockey Javier Castellano added, "I had a good trip. He's a horse you need to clock easy numbers, because he's a very consistent horse, very competitive. He gave me a good pace today and got it done." 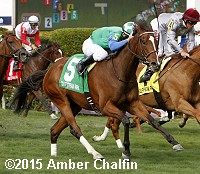 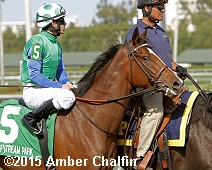 Winning jockey Junior Alvalrado, who flew in just to ride her, said "The first time I rode her at Belmont, I could definitely tell that she had a lot of class and she could compete with good fillies in the United States. Today, she was the main reason for me to come here. We had a good trip and I saved all the ground that I could. As soon as we got to the 5/16ths pole, I asked her, and she was there for me."

Kenny McCarthy, assistant to trainer Bill Mott was in Dubai said, "She was a little bit more [forward today]. I don't know if that was being fresh coming off the layoff or whatever, but she certainly had herself a little closer than maybe that we thought she would be. Equally I think she was in a good spot. I was impressed. Even Junior (Alvarado) said he was sitting there just waiting for the gaps to open. He said that he knew that once they did, she would kick in. That's her M.O., it seems, to come fast at the end. Her first race for us she ran huge. In her race in November at Churchill there was soft ground that she might not have loved, but still ran a great race. She's had the winter down here at Payson Park, came in today, and looked really good." 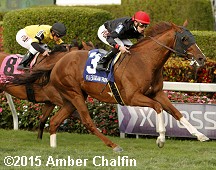 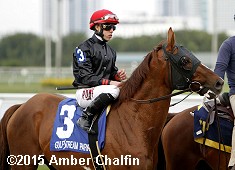 Winning trainer Shug McGaughey said, "I'm very pleased. It had been a little while since he'd won. I could maybe attribute a little bit of that to the Sword Dancer last summer, when he ran against Main Sequence. I think he left it all out there that day. I liked the way he got on his toes in the paddock today, and I thought Irad [Ortiz, Jr.] rode a terrific race on him. I thought maybe if he broke good, he might be stalking the horse that was on the lead, but Twilight Eclipse and some of them wanted to go to, so [Ortiz] just kind of got him and left him down in there, and he got relaxed with him, and then he swung him to the outside, and it was a great race from the 3/8ths-pole to the wire. It was two very, very good horses running together, so I was very pleased."

Jockey Irad Ortiz Jr. added. "It was a good trip. I was on the inside, saving ground, and on the backside, I brought him outside and he just dragged me. He finished good, he was ready." 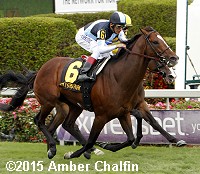 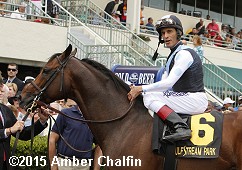 Winning trainer Christophe Clement said, "He's improved with every race. He's a very consistent horse. He's fun to train. We've been lucky in this race before, which is nice. We'll go back to New York with him, we'll see how he comes out of this before we make any plans. I think he got a great ride from Johnny (Velazquez). I wasn't sure he was going to get there. I guess that's the reason Johnny is a Hall of Fame jockey."

Jockey John Velazquez added, "It seemed like he was getting there little by little, but once I got to the sixteenth pole, I was almost sure that I'd get there. I talked to (trainer Christophe Clement) before the race and he said, 'Do what you want, put him where you are comfortable.' He said he could come from behind or run close to the pace. I thought I would try to put him a little closer to the pace. I watched the replay of his last race and it looked like it took him a little while to get going. I think by being a little bit closer I wouldn't have to work as hard to get there today." 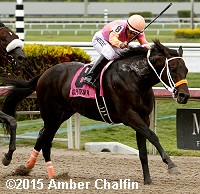 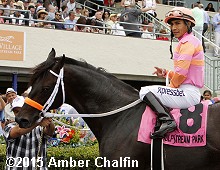 Winning trainer Kelly Breen said, "It's a privilege to have such a nice horse. A 7-year-old, we kept on racing him, and hope to find a nice place for him to be a stallion at the end of the year. If we can get him back to the Breeders' Cup Mile, that's the goal for right now. It's just nice to see him come back like that. I didn't think I really had him tight enough. And he likes Paco. They just mesh. It was a perfect storm. Everything worked out well."