The highlight of the Gulfstream Park meeting is the $1 million Florida Derby (G1), a major prep for the Kentucky Derby. A field of 8 three-year-olds contested this 1 1/8 mile trip on Saturday afternoon before 18,224 fans under clear skies and temperatures in the mid 80's. As expected, Fountain of Youth Stakes (G2) winner Union Rags was sent off as the 2-5 favorite, his lone career defeat occurring in the Breeders' Cup Juvenile. In to challenge him included 5-2 second choice El Padrino, winner of the Risen Star (G2) at Fair Grounds last out, and 7-1 third choice Take Charge Indy, winless since his debut and exiting a runner-up effort in an allowance.

Jockey Calvin Borel sent Take Charge Indy to the rail and to the lead first time past the stands, and he set easy fractions of 23.60, 47.71, and 1:12.09 over the fast track, while pressed by 31-1 Reveron to his outside. Union Rags stalked the pace about 3 lengths back in 5th. Entering the stretch, the pacesetters continued to hold onto the lead, getting the mile in 1:35.96. Union Rags put in a strong rally but Take Charge Indy easily held off Reveron late by 1 length for the win in 1:48.79. It was just a neck back to Union Rags third. 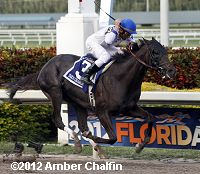 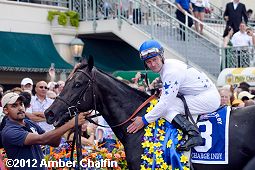 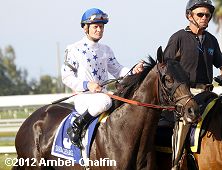 Left: Take Charge Indy in the winner's circle. Trainer Pat Byrne said, "We knew he liked the racetrack. We're not surprised. It's a great result with that pedigree and (winning) a Grade 1. I didn't feel there was any pressure on me going in. I was 7-1. Mike (Matz) was 1-5. It's nice to be 1-5 because it usually means you have the best horse on that day. But I wouldn't trade places with him. This was a solid race today"

Right: Take Charge Indy in the post parade. Jockey Calvin Borel said, "He needed the last race, I don't care what anybody says. This horse, he has the potential; he has the breeding behind him. Pat's been to the big dance, so he wasn't coming to play. He'd been off for a while, and I didn't want to take anything from him. I think we got enough out of the race last time for today, and it set him up just right." 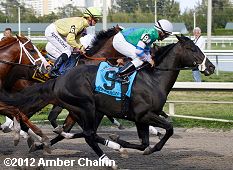 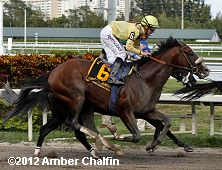 Left: Second place finisher Reveron shortly after the start. The 31-1 longshot pressed the pacesetter the whole way under jockey Elvis Trujillo but could not pass. The Agustin Bezara trainee improved his record to 3 wins, 2 seconds, and 2 thirds in 7 starts, earning $324,460 for owner Stipa Racing Stable.

Right: Third place finisher and beaten favorite Union Rags runs out after the finish. Trainer Michael Matz said, "Julien (Leparoux) said Javier (Castellano aboard El Padrino) was on him the whole time down the backside, but that's just race-riding. He said he should have been closer the way the track has been right now. Horses aren't coming back. Pat's horse got an easy lead and he got a head start on me, and we just couldn't get him. Julien said he just didn't get out in time and the way the track is today, you had to be close to the pace." 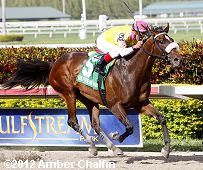 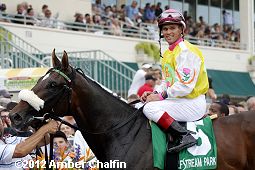 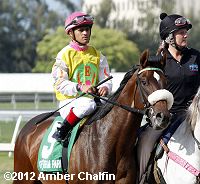 Left: Grace Hall in the winner's circle. Trainer Rick Dutrow said, "I was confident that she would run a big race and it set up perfect. She is happier outside in the clear. We'll point her for the Kentucky Oaks (May 4 at Churchill Downs). We know she's happy here training at Palm Meadows and we'll keep her there until at least Apr. 15."

Right: Grace Hall in the post parade. Jockey Javier Castellano said, "We got the perfect outside trip which is what I wanted. I was hoping we'd be able to stalk the pace and that's the way it worked out. She was very strong the entire way today. It was a really impressive effort." 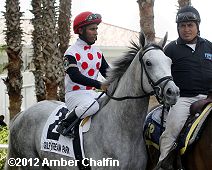 Second place finisher Zo Impressive heads out for the post parade. The 2-1 shot was 6th early under Rajiv Maragh, then passed tiring horses but was no match for the winner. The Tom Albertrani trainee improved her record to 2 wins and 1 second in 3 starts, earning $109,800 for owner-breeder Live Oak Plantation. 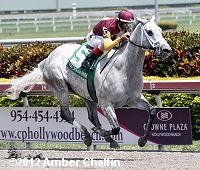 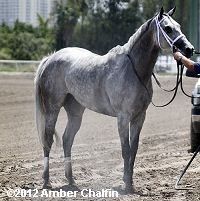 Awesome Maria won this event last year as well, but completed the trip nearly a second faster this year.

Winning jockey John Velazquez said, "That was awesome. Just to have her back this year alone and the way that she put her two races back-to-back is awesome to see."

Winning trainer Todd Pletcher said, "There is a little more pressure when you send one out like this. Anything less than a win is really unacceptable. She was giving them all 6 pounds and she ran another great race. We were concerned that she could come back from the injury and regain her best form, but she obviously has. We'll probably skip the (Shuvee) and look at the Ogden Phipps (at Belmont on May 28) and have her fresh for the second half of the year." 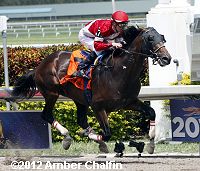 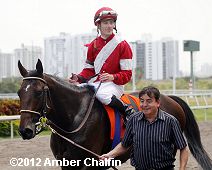 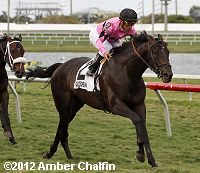 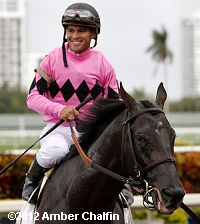 Winning trainer Chad Brown said, "He should be set up now for a good year."

Winning jockey Javier Castellano added, "We knew there was a lot of speed in the race so it worked out great," regular rider Javier Castellano said. "I just sat off them and when I asked him to run he really responded. He gave me a good kick in the end. It was a nice performance. He galloped out really nice and I think he will go farther." 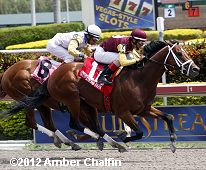 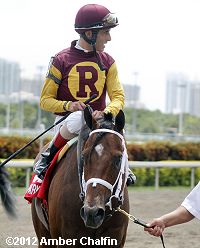 The first stakes race on Saturday was the $70,000 Sir Shackleton Handicap featuring a field of 7 older horses sprinting 6 1/2 furlongs on the main track. 3-2 favorite Jersey Town and 7-2 Will's Wildcat battled through fractions of 22.72 and 44.86. 3-1 second choice Travelin Man, who stalked the lead pair third early, moved up to challenge and outfinished Jersey Town late to win by 1/2 a length in 1:14.62. It was aother 5 1/4 lengths back to 17-1 Nathan's H.Q. third.

Winning jockey John Velazquez said, "I was very happy that we broke from the outside because I was just able to let him break and sit where he was comfortable as opposed to drawing inside and having to hustle him out of there. He got in the bridle when I asked and was very good today."