The $1 million Arlington Million Stakes (G1) celebrated its 37th renewal on Saturday afternoon at Arlington International Racecourse near Chicago. Conditions were excellent at the historic suburban Chicago oval, with sunny skies and temperatures in the low 80's, with the turf rated firm. The race is also a Breeders' Cup Challenge "Win and You're In" qualifier for the Turf. A field of 9 older horses contested this 1 1/4 mile turf contest, with Bricks and Mortar sent off as the 1-2 favorite, coming to Arlington off a 5 race win streak including the Old Forester Turf Classic (G1) and the Manhattan (G1). In to challenge him inclueed 7-2 second choice and defending champion Robert Bruce, winless since that race and 2nd in the Manhattan last out, and 9-1 third choice Magic Wand, the only filly in the race, 2nd in the Pretty Polly (G1) at the Curragh before finishing last of 11 in the King George VI and Queen Elizabeth (G1) at Ascot. 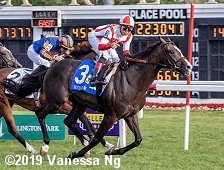 Left: Bricks and Mortar in the winner's circle. Winning owner Seth Klarman said, "He's an exceptional animal, an amazing horse, Chad has a lot of people behind him that are all very special, and this horse is really special too. What's next is up to Chad, but I think the Breeders' Cup is obviously on the horizon. It's been an amazing experience so far."

Right: The trophy presentation for the Arlington Million. Winning trainer Chad Brown said, "I've been saying it all week and all day, and I'll say it again – I love Arlington! It's a tricky decision with this distance (BC Turf or Mile) I'm going to have think about that, talk to the owner and really observe that horse. I know its protocol to say that after a race, but I don't think it could ever apply more than with a situation like this. He's undefeated this year and I don't want to make a mistake. I don't want to the one that causes him to lose by picking the wrong race." 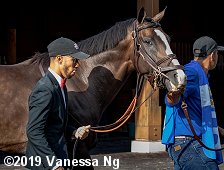 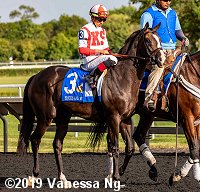 Left: Bricks and Mortar in the paddock before the race. Winning jockey Irad Ortiz Jr. said, "He's just a great horse. That makes six in a row for me and him. The first time I got on him we won by a neck but I knew how much he had left and how special he was. The rest has been history. I never worry about anyone else in the race with this horse, I just concentrate on him and let him take me where he wants. When I ask for him he's there for me every time.' 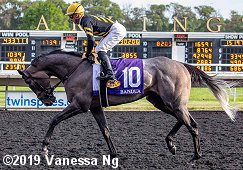 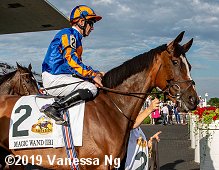 Left: Second place finisher Magic Wand heads out to the track before the race. Jockey Wayne Lordan said, "She ran a very good race. She loves very hard ground, and her last start was on very soft ground, but she likes when she comes here and the ground is fast."

Right: Third place finisher Bandua in the post parade. Jockey Adam Beschizza said, "He likes to grind it out from the front end. It was perfect. He jumped good and he stayed the distance. Look, in a race like that where you're sort of up against it a little bit and stepping up in class, that's the best thing you can do. Take it to them. You're not going to catch a horse like [Bricks and Mortar]."

First time by in the Arlington Million with Bandua on the lead. Eventual winner Bricks and Mortar is in 6th at this point.

On to the Beverly D. won by Sistercharlie
On to the Secretariat Stakes won by Valid Point