The $1 million Arlington Million Stakes (G1) celebrated its 30th renewal on Saturday afternoon at Arlington Park near Chicago, before 34,022 fans in attendance. Conditions were excellent with clear skies and temperatures in the mid 70's, with the turf course rated good. A field of 11 older horses went to post in this 1 1/4 mile turf feature, with Premio Presidente della Repubblica (G1) winner Crackerjack King sent off as the lukewarm 7-2 favorite off his fifth place finish in the Coral Eclipse (G1). In to challenge him included 15-4 second choice Little Mike, winner of the Woodford Reserve Turf Classic (G1) before finishing third in the Shoemaker Mile (G1), and 4-1 third choice Boisterous, second in the Arlington Handicap (G3), the major local prep for the Million.

Jockey Ramon Dominguez sent Little Mike to the lead first time past the stands and he set slow fractions of 25.10, 49.95, and 1:15.03 while as many as 1 1/2 lengths in front of 12-1 Willcox Inn and 9-1 Columbian stalking him second and third. On the far turn, Little Mike continued to lead, getting the mile in 1:39.54. Dominguez asked Little Mike for run and he quickly opened up a 4 1/2 length lead at the 1/8 pole. 11-2 fourth choice Afsare, 7th early, put in a strong late rally but Little Mike easily held him off by 1 1/2 lengths at the line, completing the ten furlong trip in 2:02.44. It was another 1 1/2 lengths back to Columbian and 16-1 Rahystrada who finished in a dead-heat for third. Favorite Crackerjack King was a nose back in fifth. 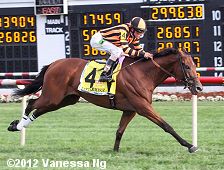 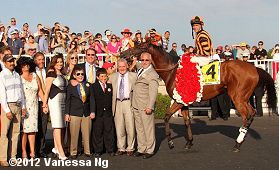 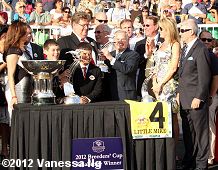 Left: Little Mike in the winner's circle. Winning owner-breeder Carlo Vaccarezza said, "If anyone asks, we can go 1 1/2 miles.  To be honest I was on pins and needles, nobody believed in this horse. You know the horse better than anyone else. This horse ran tremendously. Dale Romans did a fantastic job."

Right: The trophy presentation for the Arlington Million. Trainer Dale Romans said, "I felt good about him, he training so well, and his two best races were 1 1/8, and nobody thought he could go 1 1/8. So a little different pace scenario, when you 3/4 in 1:15 he's going to be hard to catch." 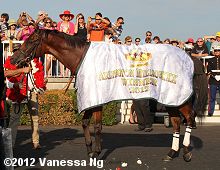 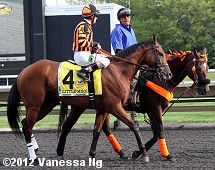 Left: Little Mike with his winner's blanket. Winning jockey Ramon Dominguez said, "He was running very comfortable.  Turning for home when I decided to let him run, he beautifully started opening up.  I wasn't sure how slow we were going.  I got to the 3/8 pole and he started to open it up.  I tried to slow him down to this point (before) but from now on I'm going to let him spring home.  He galloped home like a freight train.  It feels great (to win my second Arlington Million).  I was hoping I could win some of the other races today but it just didn't work out that way." 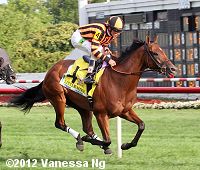 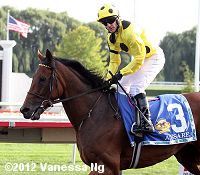 Right: Second place finisher Afsare returns after the race. Jockey Kieren Fallon said, "I know what was happening (slow pace set by the winner) and there was nothing I could do. I had to ride my horse to win, and there was no pace. His antics (rearing before the start) didn't cost him. He just acts like a spoiled child sometimes and didn't want the gate. He has a big race in him." 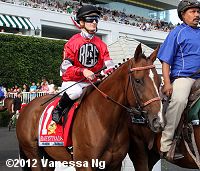 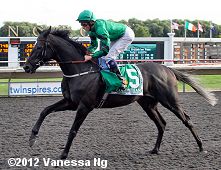 Left: Third place finisher (dead heat) Columbian takes off after the post parade. Jockey William Buick said, "Was I third again?  He gave a good run.  He probablu ran the race of his life.  We're certainly happy.  You'd like to win everytime you go out there, but I'll settle for what I got today (three third-place finishes). I couldn't be happier with what an honest race he ran. (Trainer John Gosden) did a fantastic job with this horse."

Right: Third place finisher (dead heat) Rahystrada heads out to the track before the race. The 16-1 shot raced in 7th early, 6 lengths off the pace under jockey Julien Leparoux, then rallied late to get third beaten 3 lengths. The Byron Hughes trainee improved his record to 13 wins, 3 seconds, and 8 thirds in 39 starts, earning $1,186,950 for owner Robert Courtney Jr.

The newest race to be added to Million day is the $400,000 American St. Leger Stakes, for older horses going 1 11/16 miles around three turns of the turf. Jakkalberry was sent off as the 8-5 favorite in the field of 9, winless since last August and coming to America off a fifth place finish in the Hardwicke Stakes (G2) at Royal Ascot. In to challenge him included 5-2 second choice Ioya Bigtime, winner of the Stars and Stripes (G3) last out, and 7-2 third choice Lake Drop, off his win in the Premio Carlo d'Alessio (G3). 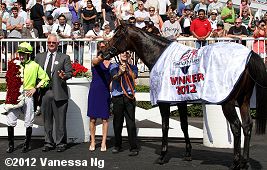 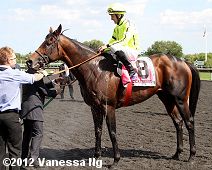 Left: Jakkalberry in the winner's circle. Winning jockey Colm O'Donoghue said, "Mrs. Botti was very confident in him. They said he is in good form, he gave me a lot of confidence rating him, we expected a good run. My horse was the class he can really run. It was a solid run race. He got into a good position and travelled really well. "

Right: Jakkalberry gets hosed down after the race. Winning trainer Marco Botti said, "He travelled well and I liked the way he picked up. Obviously he stays very well. The plan is the Melbourne Cup. He will go into quarantine in September, so he won't run again in Europe. There are races like the Caulfield Cup as well as the Melbourne Cup to aim at if all goes well." 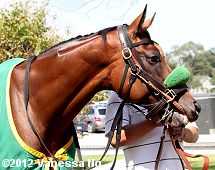 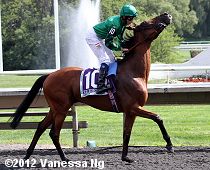 Left: Second place finisher Ioya Bigtime heads into the paddock before the race. Jockey Jeffrey Sanchez said, "He ran great.  He gives me everything he has. I'll get 'em next time! He's a great horse, I love him, he loves me, and he gives me everything he's got." Trainer and co-owner Chris Block added, "Great job Jeffrey, great ride."

Right: Third place finisher Zuider Zee in the post parade. Jockey William Buick said, "He ran well but he hit a flat spot. These tight-turning tracks are not ideal for him and he's better with a little more cut in the ground."

On to the Beverly D. won by I'm A Dreamer
On to the Secretariat Stakes won by Bayrir