The distaff counterpart to the Arlington Million is the $750,000 Beverly D Stakes (G1). A field of 10 older fillies and mares contested this 1 3/16 mile trip over the Arlington turf course on Saturday, with Sheepshead Bay (G2) winner Aruna sent off as the 3-1 favorite off her second place finish in the New York Stakes (G2). In to challenge her included 7-2 second choice Marketing Mix, winner of the Nassau (G2) and Dance Smartly (G2) at Woodbine, and 4-1 third choice Mystical Star, winner of the New York Stakes.

Aruna stumbled badly at the start and trailed immediately as 10-1 Romacaca and 13-1 Up dueled for the lead through fractionas of 23.67, 48.40, and 1:12.54 while stalked by 20-1 Upperline and 13-2 Joviality. Up gained the lead midstretch through 1 mile in 1:37.32 but tired soon after. 6-1 fourth choice I'm A Dreamer, 7th early, closed late and outfinished Marketing Mix to get the win by a head in 1:55.39 over good turf. It was another 3/4 lengths back to Joviality third, while favorite Aruna could not recover from the poor start, finishing last. 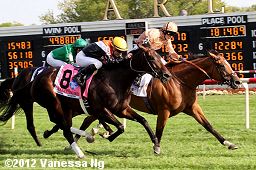 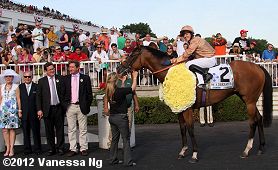 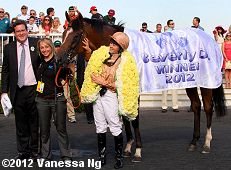 Left: I'm A Dreamer in the winner's circle. Winning trainer David Simcock said, "Hayley was on her when she won the third race of her career and she subbed for me when we won a Group I (with another horse) last year. She's very capable. The most important thing Hayley did was put her in a good position to challenge. She ran a fantastic race. It isn't a long straight (by European standards) but it felt as though it was a long straight today. She quickened up when (Marketing Mix) was coming."

Right: I'm A Dreamer in her winner's blanket. 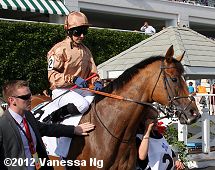 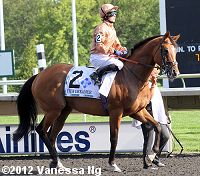 Left: I'm A Dreamer heads out to the track before the race.

Right: I'm A Dreamer in the post parade. Winning jockey Hayley Turner said, "I can't believe it.Ý Thanks to David Simcock and his team because I haven't had a lot to do with this filly.Ý I always think that when you have a horse with a lot of ability, it makes your job a lot easier.Ý Well I thought she had a good chance.Ý She had a good attitude before the race. I think she seems to sparkle well when she's over here (in North America).Ý She's been here before.Ý It helped to have been here before and know the track.Ý Everybody is so friendly over here." 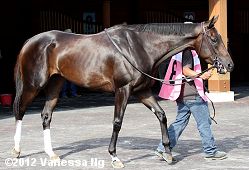 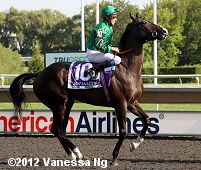 Left: Second place finisher Marketing Mix in the paddock. Jockey Julien Leparoux said, "She ran great, she's a nice filly. She was running, maybe [the winner] got the jump on us, but she ran great. I was where I wanted to be."

Right: Third place finisher Joviality in the post parade. Jockey William Buick said, "She ran perfect.Ý She ran great. Colm O'Donoghue (aboard Up) knocked the whip out of my hands turning into the straight, so I lost the whip but she ran great.Ý This is probably her career best.Ý I was very happy with her." 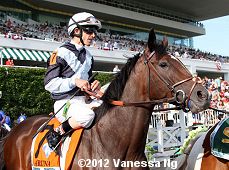 Last place finisher and beaten favorite Aruna heads out to the track before the race. Jockey Ramon Dominguez said, "She just stumbled.Ý I don't know what happened there and then we were last the whole way." 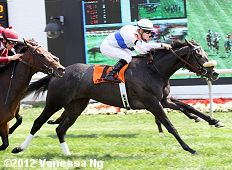 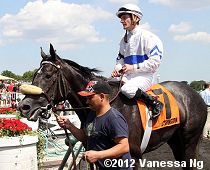 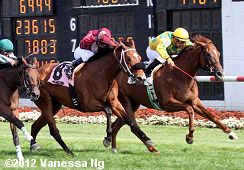 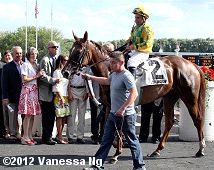 In the second division, run between the Secretariat and Beverly D, 8-1 Soonerette and 9-1 Lady Candidate dueled for the lead through fractions of 48.38 and 1:12.76 before tiring. 5-2 second choice Leading Astray and jockey Eduardo Perez, fourth early, overcame traffic trouble and outfinished late-running 2-1 favorite Freedom Reigns by a nose in 1:42.90. It was another 1/2 length back to 21-1 longest shot Drama Drama third.

Winning trainer and co-owner Chris Block said "Today was a test" and that she would go next in the Pucker Up Stakes (G3) on September 15.