The first of three Grade 1 stakes races on Arlington Million Saturday was the $500,000 Secretariat Stakes (G1) for 3-year-olds going the Million distance of 1 1/4 miles on the turf. A field of 8 went to post with Silver Max sent off as the 2-1 favorite off a 6 race winning streak including the American Turf (G2) and the Virginia Derby (G2). In to challenge him included 5-2 second choice Summer Front, winner of the Hill Prince (G3) and the Duluth Stakes, and 3-1 third choice Bayrir, winner of the Prix Eugene Adam-Grand Prix de Maisons-Laffitte (G2) last out in France.

Jockey Robby Albarado sent favorite Silver Max to the lead first time by and he set easy fractions of 24.65, 48.94, and 1:13.25 over the good turf while as many as 2 lengths in front of Summer Front and 6-1 Daddy Long Legs. On the far turn Daddy Long Legs gained a short lead through 1 mile in 1:37.63 but tired badly soon after, allowing Summer Front to inherit the lead. Summer Front opened up a 1 1/2 length lead at the 1/8 pole, but Bayrir, 7th early, closed late to win by 1 1/4 lengths over late-running 8-1 Finnegans Wake in 2:02.92. It was another 1 1/4 lengths back to Summer Front third, while favorite Silver Max checked in fifth. 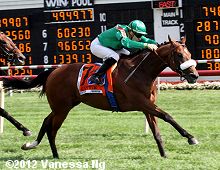 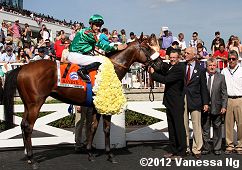 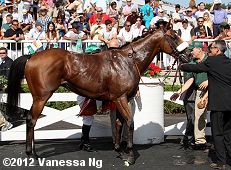 Left: Bayrir in the winner's circle.

Right: Bayrir gets ready to return to the barns. Winning trainer Alain de Royer-Dupre said, "I think he's a very good horse, because he's very calm, as you saw before the race. We had a good pace in the race, and he has a good turn of foot." 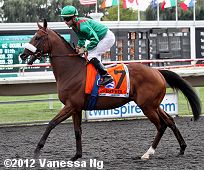 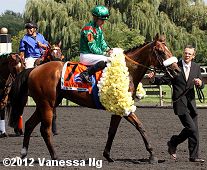 Left: Bayrir takes off after the post parade. Jockey Christophe Lemaire said, "It wasn't the plan (to be far back early) but the race started out very quickly.  I let my horse get into the race.  On the backstretch, he was racing very well and he took the bit on his own around the last corner.  When I put him out he reacted very well.  He's a very clever horse.  He's a very classy horse."

Right: Bayrir circles with his flowers. 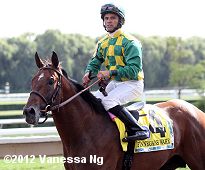 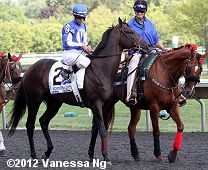 Left: Second place finisher Finnegans Wake returns after the race. Trainer Dale Romans said, "He gets better all the time. He ran a big race. He's an improving horse, getting better all along. I think he'll continue to improve." Jockey Jose Lezcano added, "At the 1/8 pole I had horse and a hole closed. Soon as he had an opening he went right through it. He felt great."

Right: Third place finisher Summer Front in the post parade. Jockey Ramon Dominguez said, "He seemed like he got a little tired in the final 3/16." 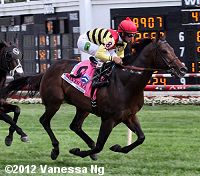 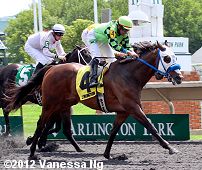 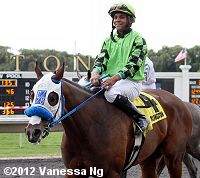 On to the Arlington Million won by Little Mike
On to the Beverly D. won by I'm A Dreamer