The $1 million Arlington Million Stakes (G1) celebrated its 34th renewal on Saturday afternoon at Arlington International Racecourse near Chicago. Conditions were excellent at the historic suburban Chicago oval, with partly cloudy skies and temperatueres in the low 80's. The race is also a Breeders' Cup Challenge "Win and You're In" qualifier for the Turf. After 2 scratches, a field of 11 older horses contested this 1 1/4 mile trip around two turns of the outside lane of the Arlington course, with United Nations (G1) winner and Manhattan (G1) third place finisher World Approval sent off as the 7-2 favorite. In to challenge him included 4-1 second choice Tryster, 5th in the Prince of Wales' (G1) after finishing third in the Dubai Turf (G1), and 9-2 third choice Mondialiste, winless since last year's Woodbine Mile but second in both the Breeders' Cup Mile (G1) and the York Stakes (G2).

Jockey Edgar Prado sent 13-1 Take the Stand to the lead first time by and he set fractions of 25.56, 49.74, 1:14.14, and 1:38.21 over the firm going while pressed by World Approval and stalked by 73-1 longest shot Pumpkin Rumble. Entering the lane, Take the Stand tired as 8-1 Deauville, who tracked the pacesetters in fourth early, moved out 3 wide to gain a short lead in midstretch. However, Mondialiste, 6th early, came out 5 wide for room and outfinished late-running 12-1 Kasaqui to win by a neck in 2:01.87. It was another neck back to Deauville third, while World Approval faded late to check in 7th. 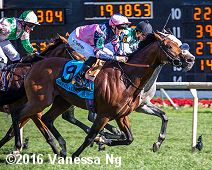 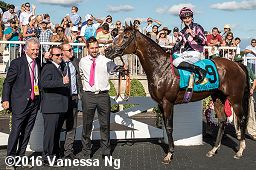 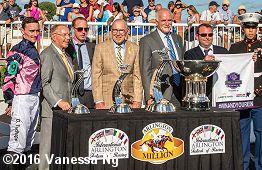 Left: Mondialiste in the winner's circle. Winning trainer David O'Meara said, "We stepped him up to a mile and a quarter at York and he ran a really good race, and once we saw that he handled the trip okay, we had this race in the back of our mind. We thought we'd bring him over because he performed so well this side of the water last year." 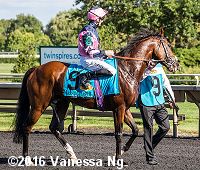 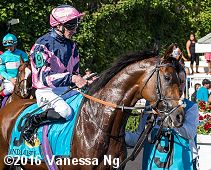 Left: Mondialiste in the post parade. Winning jockey Daniel Tudhope said, "We couldn't have worked out more perfect to be honest, we went over the race so many times beforehand, but you just don't know how it's going to go, but we couldn't have asked for a better run really it was perfect. He always looks like he gets worked up before the start, that's him though. He's not used to it, and that doesn't help. But he seems to love it over here and he thrives over here. It's amazing for (David O'Meara and I, to get a "Win and You're In" to the Breeders' Cup Turf), even everyone back home in the yard, we all work hard and they deserve this just as much as we do. Hats off to everyone in the yard. It's an amazing feeling."

Right: Mondialiste in the paddock before the race. 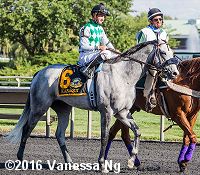 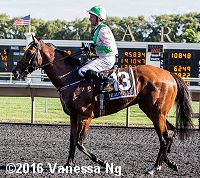 Left: Second place finisher Kasaqui in the post parade. Jockey Robby Albarado said, "I liked my trip until the three-eighths pole. I needed to get out a jump and a half earlier and I would have won."

Right: Third place finisher Deauville returns after the race. Jockey Seamie Heffernan said, "My horse had a pretty good run. He was the only 3-year-old in the race. In a lovely position, got around the two into the straight and two other horses just came and got me. Solid performance" 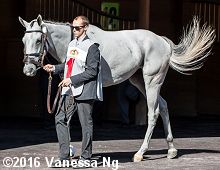 Seventh place finisher and beaten favorite World Approval in the paddock before the race. Jockey Florent Geroux said, "Great trip. I was a little disappointed to be honest, the pace went slow and I was right there into the first turn. When they picked it up, he just spit the bit and couldn't keep up."

The first International race of the card was the $300,000 American St. Leger Stakes (G3) for older horses going 1 11/16 miles around three turns of the turf. Belmont Gold Cup winner Da Big Hoss was the 4-5 favorite in the field of 9 over 11-2 Billabong, second in the Emirs Trophy (G1) last out in Qatar, and 6-1 Clondaw Warrior, winner of the Galway Handicap Hurdle. 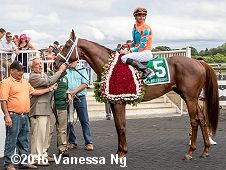 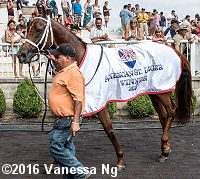 Left: Da Big Hoss in the winner's circle. Winning trainer Mike Maker said, "His pedigree and his looks gave me the impression he would like marathon races."

Right: Da Big Hoss with his winner's blanket. Winning jockey Florent Geroux said, "He just loves to win. He always finds a way to find the wire and it doesn't matter where he is, when you ask him to go, he goes." 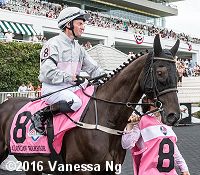 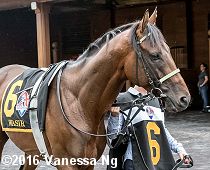 Left: Second place finisher Clondaw Warrior heads out for the post parade. Jockey Seamie Heffernan said, "He ran a lovely race. He was a bit slow from the gate, but the American horses are usually quicker than us, but he's a very sweet horse and he ran a lovely race."

Right: Third place finisher Wasir in the paddock. Jockey William Buick said, "I was really pleased with him, he had a very good run. Maybe even a career best. We found a horse to pace, the pace was fine. We rode a sensible race up front, and he stayed all the way to the line. It was a very great race, as simple as that."

On to the Beverly D. won by Sea Calisi
On to the Secretariat Stakes won by Beach Patrol