The $1 million Arlington Million Stakes (G1) celebrated its 31st renewal on Saturday afternoon at Arlington Park near Chicago, before 34,222 fans in attendance. Conditions were excellent with clear skies and temperatures in the high 70's, with the turf course rated firm. A field of 13 older horses went to post in this 1 1/4 mile turf feature, with 2012 Argentine Derby (G1) winner Indy Point sent off as the 5-2 favorite off his win in the Wickerr at Del Mar. In to challenge him included 4-1 second choice Grandeur, second in the SkyBet York Stakes (G2) last out, and 9-2 third choice, defending champion Little Mike, winless since last year's Breeders' Cup Turf (G1) and coming here off a fourth place finish in the United Nations (G1).

Jockey Joel Rosario sent Little Mike to the lead first time by and he set fractions of 24.34, 48.99, 1:13.00, and 1:37.22 while pressed by 20-1 Mull of Killough and stalked by 261 Rahystrada. Entering the lane, Little Mike tired as 6-1 The Apache, fifth early, moved up to take the lead at the 3/16 pole. 8-1 Real Solution, 9th early on a ground-saving trip, came out for room and challenged for the lead inside the 1/8 pole. The Apache bore out, bumping Real Solution, and finished a head in front in 2:00.99 over the firm course. It was another 2 lengths back to 24-1 Side Glance third. Due to the bumping in the stretch, jockey Alan Garcia aboard Real Solution claimed foul against Christophe Soumillon aboard The Apache. After a lengthy inquiry, the stewards disqualified The Apache and placed him second, handing the victory to Real Solution. 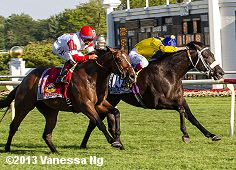 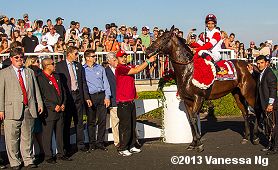 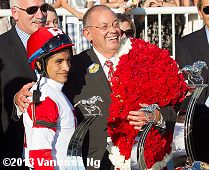 Left: Real Solution in the winner's circle. Winning jockey Alan Garcia said, "He broke really good. The first 2 1/2 (furlongs) I took him back out of there; he was nice and relaxed. At the top of the stretch, I had plenty of horse to go by and the other horse bumped us more than four times – made me lose my momentum. If that didn't happen, we might have won by 2 or 3 lengths."

Right: The trophy presentation for the Arlington Million with jockey Alan Garcia and owner-breeder Ken Ramsey. Ramsey said, "I think (sire Kitten's Joy's) stud fee is going up from $50,000 next year! This is right up there with winning the Dubai World Cup. It couldn't be better than this! This is a Win and You're In race, so I'll sit down with Chad and see where he thinks is the best place to go. I've got the best arsenal I've ever had for the Breeders' Cup." 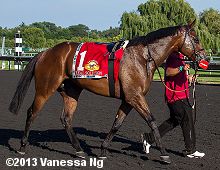 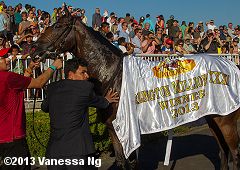 Left: Real Solution circles while the stewards decide on the disqualification. Winning trainer Chad Brown said, "What a day. What a day. When they crossed the finish and he got beat a nose I broke my watch after I hit the desk in my office in the barn. I got up and went for a walk and then the help came running after me to come back to the barn because there was an (objection)." 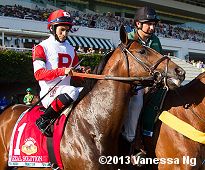 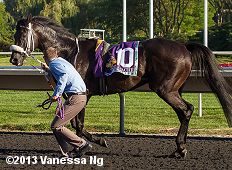 Left: Real Solution heads out for the post parade.

Right: Second place finisher The Apache circles while the stewards decide on the disqualification. Jockey Christophe Soumillon said, "As you can see, we were the better horse, but he got scared by the (Jumbotron) screen and shifted out. We were the best horse." 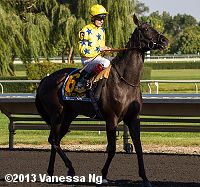 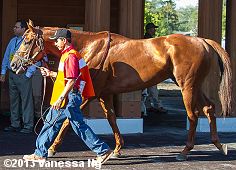 Left: Third place finisher Side Glance in the post parade. The 24-1 shot settled in fourth 3 lengths back early under jockey Jamie Spencer, then held on to finish third beaten 2 lengths. The Andrew Balding trainee improved his record to 7 wins, 4 seconds, and 7 thirds in 28 starts, earning $1,134,176 for owner Pearl Bloodstock Ltd.

Right: Last place finisher and beaten favorite Indy Point in the paddock before the race. Jockey Gary Stevens said, "He didn't like the ground at all. He warmed up fresh; I think the quick turnaround and excitement got to him. He had a good feel to him the first time through, but then didn't like it and was protecting himself. I eased up on him and let him gallop out."

The first International race of the card was the $400,000 American St. Leger Stakes, for older horses going 1 11/16 miles around three turns of the turf. Dandino was sent off as the 4-5 favorite in the field of 7, off second place finishes in the Jockey Club (G2) at Newmarket and the Hardwicke (G2) at Royal Ascot. In to challenge him included 4-1 second choice Wigmore Hall, third in the SkyBet York Stakes (G2) last out, and 5-1 third choice Najjaar, off a fourth place finish in the Arlington Handicap (G3). 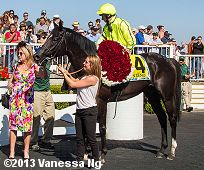 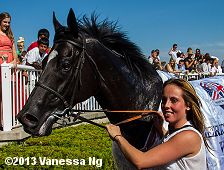 Left: Dandino in the winner's circle. Liz Dance, wife of owner Darren Dance said, "Very testing ride. Bit of a check at the top of the straight, which worried us, but Ryan found the gap. A magnificent ride."

Right: Dandino heads back to the barn after the race with his new winner's blanket. Jockey Ryan Moore said, "I thought I'd just sit third and keep it simple, but the boys were on top of me the entire time. There were quite a few changes of plan." 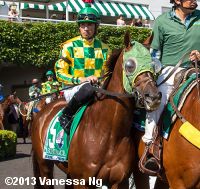 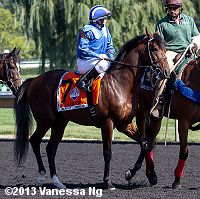 Left: Second place finisher Suntracer heads out to the track before the race. Jockey Eddie Castro said, "I got stuck the whole way on the rail," Castro said of the runner-up. "The pace was slow. I needed more space. I'm happy with his run. The horse (Dandino) pushed me ought a little bit and he (Suntracer) worked very hard."

Right: Third place finisher Najjaar in the post parade. Jockey James Graham said, "Tough as nails, that guy. I love him. He quickened, but they did too. They just stayed on better."

On to the Beverly D. won by Dank
On to the Secretariat Stakes won by Admiral Kitten