The first of three Grade 1 stakes races on Arlington Million Saturday was the $500,000 Secretariat Stakes (G1) for 3-year-olds going the Million distance of 1 1/4 miles on the turf. A field of 13 went to post with Jack Milton sent off as the 5-2 favorite off a close third in the Virginia Derby (G2). In to challenge him includd 9-2 second choice Rydilluc, 8th in the Virginia Derby after winning the Pennsylvania Mile, and 5-1 third choice Admiral Kitten, second in both the American Classic (G3) and American Derby (G3), the local prep series for this race.

Jockey Julio Felix sent 98-1 Golden Jason ton the early lead through fractions of 24.96 and 49.91 while stalked by Rydilluc and 16-1 Stormy Len. Entering the far turn, Golden Jason tired as Stormy Len moved up to take over the lead through 1 mile in 1:38.13. Stormy Len opened up a 3 length advantage at the 1/8 pole, but Admiral Kitten, 10th early, unleashed a strong rally to win by 1 1/4 lengths in 2:02.17. It was another 1 1/4 lengths back to favorite Jack Milton third. 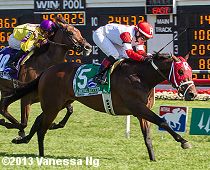 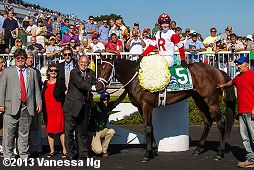 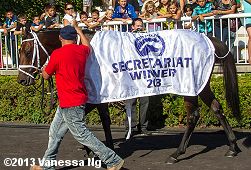 Left: Admiral Kitten in the winner's circle. Trainer Mike Maker said, "After four second-place finishes we were due for a good trip one of these times. He had lost ground to the winners in those races, and Rosie saved ground on both turns here, and he came with his run."

Right: Admiral Kitten heads back to the barns in his new winner's blanket. 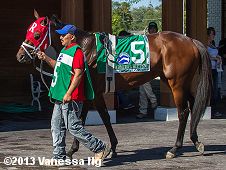 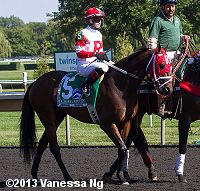 Left: Admiral Kitten in the paddock before the race. Jockey Rosie Napravnik said, "We were able to sit back and relax, that's kind of the horse's style. We got a clear trip around the second turn and he was just finishing fast. He's a very classy horse, very laid back, and very enjoyable to ride." 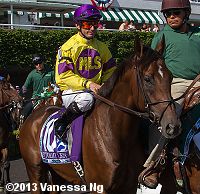 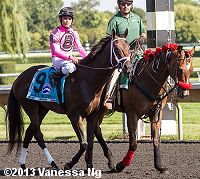 Left: Second place finisher Stormy Len heads out to the track before the race. Jockey Alex Solis said, "I can't complain. We sat exactly where I wanted to be, and he is the kind of horse who just keeps on at that same pace when he gets going. I was really happy at the top of the stretch, with them having to come and get me. He ran great."

Right: Third place finisher and beaten favorite Jack Milton in the post parade. Jockey Joel Rosario said, "He broke slow, and I had to rush a little bit to get position. Then we steadied a little bit turning for home, but he ran his race once we were going. With a better break we’d have done better. It hurts your momentum to have to use him up early and not relax." 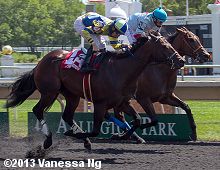 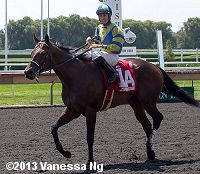 On to the Arlington Million won by Real Solution
On to the Beverly D. won by Dank