The $1 million Arlington Million Stakes (G1) celebrated its 29th renewal on Saturday afternoon at Arlington Park near Chicago, before 31,069 fans in attendance. Intermittent rains and temperatures in the lower 80's downgraded the turf course to yielding. A field of 10 older horses went to post in this 1 1/4 mile turf feature, with Man o'War Stakes (G1) winner Cape Blanco sent off as the 2-1 favorite in his second U.S. start. In to challenge him included 2009 winner and 2010 runner-up Gio Ponti at 5-2, second behind Cape Blanco in the Man o'War last out, and 7-1 third choice Mission Approved, winner of the Manhattan Handicap (G1) before finishing 4th in the Man o'War.

Jockey Jose Espinoza sent Mission Approved to the lead first time past the stands and he set easy fractions of 24.81, 50.26, 1:16.04, and 1:41.50 while as many as 2 lengths in front of 47-1 longest shot Proceed Bee and 19-1 Dean's Kitten pressing him in second and third respectively. Favorite Cape Blanco sat midpack 4th down the backstretch while Gio Ponti was 8 lengths back in 7th. Entering the homestretch, Mission Approved tired as Cape Blanco came out 3 wide to pass the leaders, opening up a 2 1/2 length lead with a furlong to go. Gio Ponti, stuck down on the rail in traffic, could not get outside for room until inside the 3/16 pole and put in a strong rally but was left with too much ground to recover, as Cape Blanco cruised past the post 2 1/2 lengths ahead in 2:05.39 over the yielding course. It was just a neck back to Dean's Kitten third. 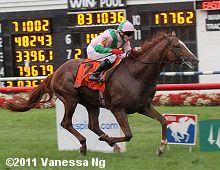 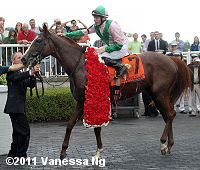 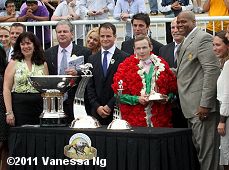 Left: Cape Blanco in the winner's circle. Alex Cole, racing manager for co-owners Jim and Fitti Hay said, "Of course it's not (much of a rivalry), we met him 3 times and we beat him 3 times. Gio Ponti must be sick of the sight of us. You'd have to (return to the U.S.) wouldn't you? The Breeders' Cup (Turf), that'd be under consideration. But we do what Aidan tells us to do." Cape Blanco earned an automatic entry into the Turf with this win, part of the Breeders' Cup Challenge "Win and You're In" program. 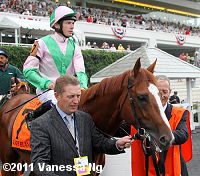 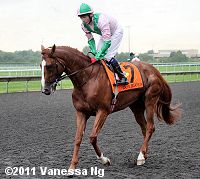 Left: Cape Blanco heads out for the post parade. His jockey Jamie Spencer said, "He's good tough horse and he's brilliantly trained. All I did was was do the steering. Aidan (O'Brien) gave me my instructions and I rode accordingly. I'm very pleased just to be able to ride the horse. There are very few horses that have the will to win like he has. The more you ask from him, the more you get from him. He had loads left in the end." Asked about redemption (Spencer was aboard Powerscourt who was disqualified from fist in the 2004 running), he added, "I try not to dwell on the past. Mine's pretty colorful, so I look to the future."

Right: Cape Blanco takes off after the post parade. 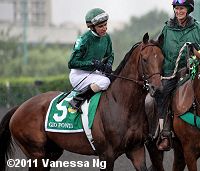 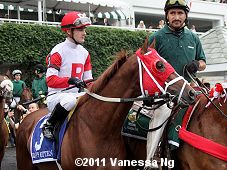 Left: Second place finisher Gio Ponti in the post parade. His jockey Ramon Dominguez said, "The winner had first run on us and you have to give him credit, we were second best today. If you put him in striking range too soon, he is going to go too early and it takes him out of his game. He isn't 3 any more, but he runs so good every time he's out there. We are all so used to his consistency."

Right: Third place finisher Dean's Kitten heads out to the track before the race. His jockey Julien Leparoux said, "I had a very nice trip. I was right behind the winner the whole way but couldn't gain any ground the last part of it."

On to the Beverly D. won by Stacelita
On to the Secretariat Stakes won by Treasure Beach