The first of three Grade 1 stakes races on Arlington Million Saturday was the $400,000 Secretariat Stakes (G1) for 3-year-olds going the Million distance of 1 1/4 miles on the turf. A field of 9 went to post with Irish Derby (G1) winner Treasure Beach sent off as the 3-2 favorite off a 4th place finish in the Grand Prix de Paris (G1) last out. In to challenge him included 3-1 second choice Banned, second in the Virginia Derby (G2) after winning both the American Turf (G3) and Jefferson Cup (G3), and 4-1 third choice Willcox Inn, winner of the main local preps for the Secretariat, the Arlington Classic and the American Derby (G2).

Jockey Christophe Lemaire sent 8-1 Ziyarid to the lead first time past the stands and he was allowed an uncontested lead of as many as 3 lengths through slow fractions of 25.43, 50.09, 1:14.64, and 1:39.92. Colm O'Donoghue aboard Treasure Beach stalked the pace in second, in turn 2 lengths in front of 25-1 Suntracer third. Ziyarid continued to lead into the stretch, but Treasure Beach outfinished him in the final 1/16 to win by a neck in 2:03.91 over the yielding course. It was another 1 1/2 lengths back to Banned third. 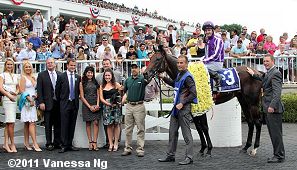 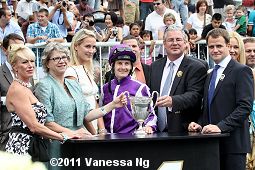 Right: The trophy presentation for the Secretariat Stakes. Charlie O'Connor, representing owner Coolmore said, "Colm O'Donoghue gave him a great ride. Aidan was pretty confident. He gave him a brilliant ride and thank God that he did. Colm and Aidan (O'Brien, trainer) were pretty confident coming over so when the two of them are confident you have to be pretty happy." 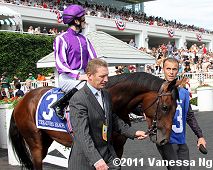 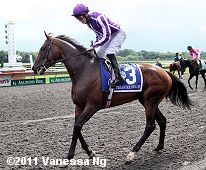 Left: Treasure Beach heads out to the track before the race. His jockey Colm O'Donoghue said, "He wasn't doing much. He was finding it quite easy in the homestretch. He just kept plugging on for me. He's very adaptable and can go on any ground. He's a horse who just does enough."

Right: Treasure Beach takes off after the post parade. 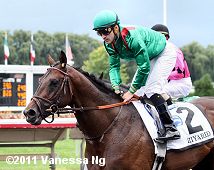 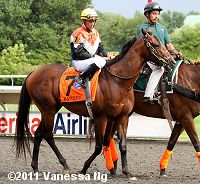 Left: Second place finisher Ziyarid returns after the race. His trainer Alain de Royer-Dupre said, "He had a perfect race. He was beaten by a true Group I horse. I'm delighted we came. I think the horse proved himself." Jockey Christophe Lemaire added, "He ran pretty well. He was very relaxed in front, and he had a nice rest on the turn. He was beaten by a Derby winner and that's not too bad, is it? He gave a great performance."

Right: Third place finisher Banned in the post parade. His jockey Garrett Gomez said, "I had a real good trip going into the first turn but the pace was just slow enough that he wasn't liking it and felt pressure from the other horses. He got rank with me and it turning for home it cost him a little bit. If he had settled in a little bit more, I think he may have been able to outrun those horses. He was handling the course real well." 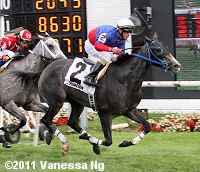 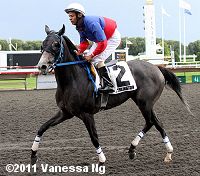 The field was so tight at the winning post, the 10th place finisher and 2-1 favorite Race to Urge was only beaten 2 lengths, as this wide view of the finish shows. Winning trainer Gennadi Dorochenko said, "I thought she deserved a chance in here".

On to the Arlington Million won by Cape Blanco
On to the Beverly D. won by Stacelita